Accessibility links
Kansas City: The View from the Middle Kansas City is at the geographical center of the country — and also at the center of political divide and consensus, business and culture, traditionalism and modernism. Its geographical and cultural middle ground has been shaping this Midwestern city since the Civil War.

Listen
Kansas City: The View from the Middle 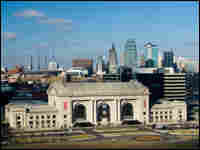 A view of the Kansas City skyline with Union Station in the foreground. Michael Westhoff/iStockphoto hide caption

The term "middle" conjures up a host of pejoratives: middling, middle-brow and middle-of-the road.

But settle down in what folks on both coasts deride as "flyover country," and you discover something different: a political environment that celebrates consensus as much as conflict, a space where culture and business are comfortably intertwined, and a place where history and modernity don't just live, but thrive.

That's why Day to Day is traveling to the middle of the country this week — to Kansas City, Mo., where member station KCUR is celebrating its 50th birthday.

Kansas City is the embodiment of the middle. It's near the geographic center of the continental United States. It's the dividing line between a traditionally "blue" state (Missouri) and a traditionally "red" one (Kansas). And it's a sprawling — but human-scale — metropolis, with a reviving downtown and so many construction cranes that locals joke "the crane is the new state bird."

The first thing you notice as an outsider is the architecture. The way glassy modernist sculptures like the still-under-construction Sprint Center arena nestles amidst stately, century-old apartment buildings. Or how the city's colonnaded grande dame, the Nelson-Atkins Museum of Art, has sprouted a funky new wing that glows softly at night.

It's that mix of then and now that lured the Kansas City Symphony's new music director, Michael Stern, three years ago.

"What I discovered was that this place was uniquely positioned, largely because of its geographic location, to do something significant here," Stern says. "Not only to give concerts, but to fight for music and for culture as a daily part of our lives."

You can't escape culture in Kansas City — the sculptures and fountains that dot its premiere shopping district, Country Club Plaza; the music that pulsates through countless clubs and the American Jazz Museum; the irresistible racks of ribs produced by its landmark barbecue joints.

But the history that culture celebrates does have a dark side.

As local author Whitney Terrell puts it, this is where "the issues that are most painful and difficult for the nation to deal with are played out in their rawest form" — slavery, abortion, the battle to save family farms, the red/blue political split.

The rivalry between Kansas and Missouri flares up every year when its flagship universities square off on the football field and basketball court. But it goes much deeper than that — back before the Civil War.

Missouri was a slave state. And Kansas suffered raid after raid from its neighbor to the east because it "did battle to halt the Western expansion of slavery," says Cheryl Brown Henderson, daughter of Oliver Brown, the man who brought the landmark Brown v. Board of Education school desegregation case.

Modern-day politics aren't quite as heated. Despite bruising battles over abortion, evolution and other hot-button issues, Kansas Gov. Kathleen Sebelius — a Democrat in an overwhelmingly Republican state — describes a political scene where there's "an opportunity to find consensus, as opposed to finding ways to fight one another."

But don't underestimate politicians in the center of the country, says Bob Dole, Kansas' former Republican senator and presidential nominee: "Middle doesn't mean that you're without convictions, that you don't understand the issues. It doesn't mean you're going to compromise everything that comes down the middle of the road. But it does mean you have an open mind. ... You're willing to listen."

We hope you're willing to listen, too — as Day to Day presents "The View from the Middle" from Kansas City, Mo.