Accessibility links
Maliki Calls Blackwater's Actions a Crime A joint commission of Iraqi and U.S. officials is examining incidents involving the Blackwater security firm, including the deaths of civilians in a melee last week in Baghdad. Prime Minister Maliki is directing harsh rhetoric at the company.

Read about the proposals in Congress to stiffen the regulations that apply to security firms in Iraq. 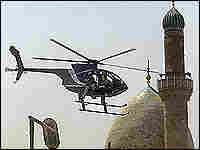 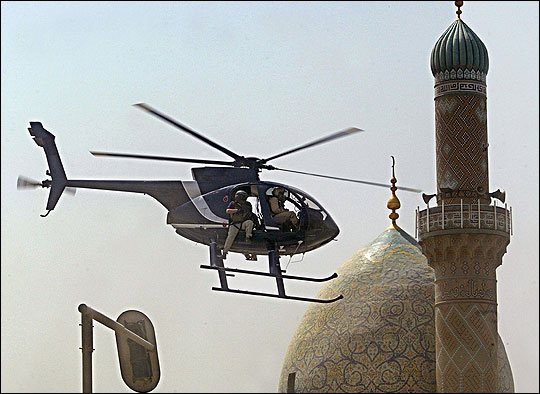 A Blackwater security firm helicopter flies low above a central Baghdad street. Iraq said that it will review the operations of all foreign and local security firms after a deadly Baghdad shootout over the weekend involving the US-based company, Blackwater.

Members of a private security company pose on the rooftop of a house in Baghdad. Patrick Baz/Getty Images hide caption 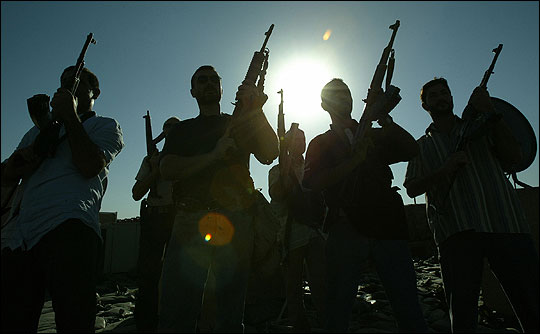 Members of a private security company pose on the rooftop of a house in Baghdad. Iraq declared that it will review the operations of all security firms working in the country following a deadly shootout involving private U.S. contractor Blackwater.

Outrage is growing in Iraq over the actions of the American security contractor, Blackwater USA.

Iraqi officials now say at least 20 civilians were killed in the Sunday shooting incident in Baghdad involving the contractors. Blackwater has said it was acting defensively, protecting a diplomatic convoy. A joint U.S.-Iraqi commission is investigating the shootings that took place on Sunday.

But Iraqi Prime Minister Nouri al-Maliki isn't waiting for the results. Al-Maliki has called the company's actions a crime.

"We will never allow Iraqi citizens to be killed in cold blood by this company which doesn't care about the lives of Iraqis," al-Maliki said.

The spokesman for Iraqi military operations in Baghdad added that Sunday's incident is just the latest in which Blackwater has targeted innocent people. He cited two similar incidents in just the past month.

As if the lid of compliance and silence was suddenly broken, Iraqi officials point to many more incidents over the past few years. Blackwater once was able to explain away shootings of Iraqi civilians, saying they were acting in self defense. But Wednesday, U.S. Embassy spokeswoman Mirembe Nantongo acknowledged those explanations are no longer good enough.

"We are working very, very close with our Iraqi counterparts to find a solution to this issue, which, as you point out, has been one that's come out in the past," Nantongo said.

The U.S. Embassy and Blackwater maintain that the security company responded on Sunday to a car bomb near a diplomatic convoy. The prime minister's office acknowledges there was a bomb, but said it was so far away that it could not have been a legitimate reason for Blackwater guards to respond as they did.

Instead, Iraqi officials said the contractors started shooting wildly when a driver mistakenly entered a traffic circle at the same time as the convoy.

NPR witnessed a similar scenario two years ago. A State Department convoy, protected by Blackwater, raced out of a compound. Guards immediately shot at a car killing an old man, his son and his daughter-in-law. Blackwater said the car was driving erratically. A U.S. military investigation concluded Blackwater had used excessive force. No one was prosecuted.

Sunday's incident seems to be the final straw — not just for Iraq's prime minister, but for the public. Outrage was bubbling on the streets.

Karim Muhammed, who owns a furniture store, said he's seen people killed by foreign security companies. He said Iraqi officials should have done something about this a long time ago.

"Why do they consider American blood first class, and ours a cheap commodity?" Muhammed said. "Are they better than us?"

And Samir Samir said he fears the private security companies far more than the U.S. military.

"The U.S. military is subject to its own laws and monitoring," Samir said. "Who monitors the security companies?"

A traffic policeman working in downtown Baghdad, who asked not to be named, said he believes security companies shoot fast and freely. He said he desperately tries to clear the streets in front of them to save Iraqi lives.

"I have to empty the streets for them; otherwise, they would harm people," the policeman said.

Blackwater personnel are still in the country, but for now they are not escorting U.S. diplomats. This means that diplomats are, in effect, stuck in the four-mile-square fortified Green Zone.

Just what legal measures can be taken against Blackwater remains unclear. It has operated outside Iraqi law, a privilege extended while Iraq was still under American administration. But al-Maliki wants Blackwater out.

"The embassy can use other companies," Maliki said.

In any event, Maliki said the United States and Iraqis are working to revise the old laws to make sure foreign security companies are accountable in the future.

In the midst of the investigations into a shooting involving Blackwater U.S.A. guards in Iraq, members of Congress are looking for ways to control private security contractors in war zones.

Legislation making its way through Congress would put contractors within reach of American law, and force their companies to disclose details of their operations.

Right now, it's not clear who, if anyone, had legal jurisdiction over the Blackwater team that was involved in the shooting that killed at least nine Iraqis in Baghdad over the weekend.

The Iraqi government claims the power to license foreign security contractors and register their weapons. Contractors say the Iraqi process is corrupt and dysfunctional. Security companies claim exemption from Iraqi law under a decree issued by former U.S. administrator Paul Bremer, but they don't clearly fit under U.S. military or civil law, either.

The Debate Over Fault

As debate over fault continues, Blackwater says it was defending a State Department convoy that was ambushed in Baghdad's Mansour district. The Iraqi government says Blackwater's gunmen were the first to shoot, opening fire on a car that failed to heed a policeman's signal to stop while the convoy passed. The Iraqi account says the shots killed the driver, his wife and their infant, and that subsequent gunfire left, not nine, but at least 20 people dead.

At first, Prime Minister Nouri al-Maliki's office said it was revoking Blackwater's license, but it appears the company doesn't currently have one. People in the security industry say the Iraqi licensing process has gotten more Byzantine and corrupt with every change of government, and that many companies are mired in the process of getting licenses. One, who asked not to be identified because of concerns that Iraq's Ministry of Interior might retaliate by making the process even harder, said that Iraqi regulations require contractors to apply nine months in advance for a license that's good for six months, "meaning that you have to apply for a renewal before you even get your original license."

Sen. Lindsey Graham (R-SC) inserted a provision into this year's Defense Appropriations Bill that would place private security contractors under the Uniform Code of Military Justice. That's a move supported by P.W. Singer, an expert on private military groups at the Brookings Institution. But Singer says the Pentagon has given its military attorneys no encouragement and no guidance on how the military code should apply to armed civilian contractors working for the U.S. government in Iraq.

Singer says the situation could be much clearer if lawmakers pass legislation that's making its way through Congress. Sen. Barack Obama (D-IL) is sponsoring a measure that would define the legal status of private security contractors, putting them under federal civilian law. It would require private security contractors working in a conflict zone to give the Pentagon details about their personnel, including their numbers, nationalities, training and disciplinary records.

Obama's legislation includes elements of bills that are also making their way through the House. It would require FBI teams in the conflict zones to investigate any allegations of criminal behavior by the contractors, and it calls on the chairman of the military's Joint Chiefs of Staff to issue rules of engagement for civilian security teams.

Singer also lauds Obama's legislation for addressing the question of what duties are appropriate for hired paramilitaries. It says they shouldn't perform what are inherently governmental functions or missions that are directly linked to the success or failure of American military units in combat.

It's not clear how Obama's bill might affect the armed fighters that the U.S. military is recruiting from tribal groups in Iraq. The U.S. currently pays such groups under ad hoc security contracts.

Doug Brooks, president of the security industry's International Peace Operations Association, says the industry would support clarified and expanded regulations on its legal status and on how its members can operate in war zones. He insists though, that most armed civilian guards in places like Iraq and Afghanistan can already be held to account under the terms of their contracts with the government.

Singer says it's a question of political will. He acknowledges that security companies do have rules of engagement written into their contracts, "but if there are no consequences for violating them, that's meaningless."