Accessibility links
Candidates and the War Whether it's valid or not, a recurring argument is that the Democrats who voted to give President Bush the authority to go to war in Iraq should have known better. The debate has echoes of Vietnam.

Candidates and the War

Candidates and the War 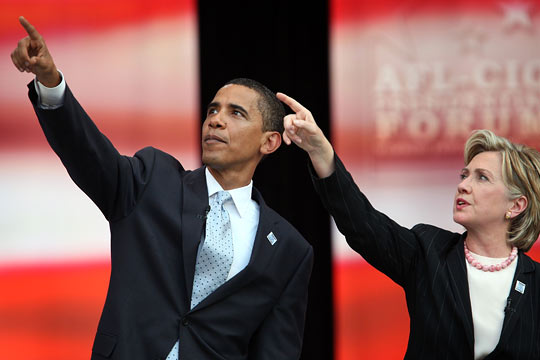 Sen. Barack Obama and Sen. Hillary Rodham Clinton have been pointing fingers over the Senate's 2002 vote to authorize the war in Iraq.

Jeannette Rankin, a Montana Republican, was the ultimate anti-war candidate, voting against U.S. entry in both World War I and World War II. hide caption

Walter Jenkins, a top LBJ aide, was arrested in a YMCA restroom shortly before the 1964 election. hide caption

There was a rather curious front-page story in last Saturday's Washington Post that caught my eye. The headline, above the fold, read, "War Critics Question Obama's Fervor." It goes on to cite a few anti-war activists, such as the son of Supreme Court Justice Ruth Bader Ginsburg, as well as liberal blogger Markos Moulitsas Zuniga, who argue that Sen. Barack Obama (D-IL) was hardly a leader against the war in Iraq until he began running for president.

As a state legislator in 2002, Obama argued strongly against going to war, a fact that his supporters point out. And his campaign has not been hesitant to remind people that, at the same time, Sen. Hillary Clinton (as well as Sens. Joe Biden and Chris Dodd, and former Sen. John Edwards) voted to give President Bush the authority to topple Saddam Hussein in a now-famous October 2002 Senate vote. But the article questions the fervor of Obama's opposition to the war after he came to the Senate in 2005. And there was a sense of impatience in the article with Obama's decision to question the judgment of some of his rivals for their 2002 vote. (Elizabeth Edwards, wife of candidate John, is quoted as accusing Obama of behaving in a "holier than thou" way on the war.)

As I was reading the article, I was wondering if the story was prompted (or planted) by a rival campaign.

The truth is, no one in the field of eight Democratic presidential candidates supports the war. True, only one, Ohio Congressman Dennis Kucinich, voted against it from the start. And some — like Clinton and Edwards — may have come around to opposing it later than some would like. Of course, when you're in a fight for the nomination, the goal is to stress differences on issues that matter between you and your opponents even if the differences are tiny. And so, even if every candidate is an opponent of the war, there remains one recurring argument: The Democrats who voted to give Bush the authority to go to war should have known better. (When Clinton called Obama "irresponsible and naive" for a comment he made about foreign policy in a recent candidate debate, Obama responded by saying that what was "irresponsible and naive" was Clinton's vote to go to war.)

I'm not sure how fair that argument is. The truth is, once upon a time this was a cause that was supported by a majority of the American people. That doesn't make the war right, or wrong, but it is a fact of life. Still, some in the we-were-against-it-from-the-start crowd want to know why would Clinton, Edwards, Biden, Dodd, John Kerry, Tom Harkin, Tom Daschle, Harry Reid, 29 in all — a clear majority of Democrats in the Senate — vote to authorize the war, when 21 others voted no? And what made a majority of the Democrats in the House — 126 of 207 — so prescient in their decision to vote against the war? What did they see that Clinton, et al., did not?

Others insist that regardless of how they voted in '02, the fact that they oppose it now is what really matters. Think of all the liberals who led the fight in the Senate against the Vietnam War in the mid- to late-'60s: Paul Douglas, Birch Bayh, Gene McCarthy, George McGovern, to name a few. All voted for the 1964 Gulf of Tonkin resolution that essentially gave President Johnson the justification to expand the Vietnam War. And when LBJ went before Congress in May of '65 asking for hundreds of millions of dollars for the war, only three senators (none of the aforementioned) stood up to vote no. But no one questioned their credentials when they took on the war later on.

In fairness, Vietnam is not Iraq, and few knew in '64 or '65 what Vietnam was going to cost in terms of lives and dollars. With Iraq, on the other hand, there was no shortage of lawmakers who felt from the beginning that an invasion was the wrong approach. Their question remains: Why didn't others in the party?

Now, time for some of your questions:

Q: What is it with Republicans and men's rooms? Before Sen. Larry Craig, there was Rep. Jon Hinson (R-MS), another "pro-family" married conservative, who was caught in the act in a Washington bathroom! He later died of AIDS. — Richard Ross, Arlington, Texas

A: If you're compiling a list of men whose political careers have ended because of antics in a public restroom, you will find at least one Democrat as well. Walter Jenkins, the longtime close aide of Lyndon Johnson, was arrested in the men's room of a D.C. YMCA just weeks before the 1964 election. Johnson's lead over Republican Barry Goldwater was so huge that the Jenkins scandal had no discernible effect on the election's outcome. Of course, there were no 24/7 Cable TV stations in 1964 that ran wall-to-wall coverage of sex scandals and personal indiscretions. Back then, the Jenkins arrest was initially front-page news but quickly disappeared from view. Jenkins, unlike Craig, was for the most part spared his 15 minutes of fame.

Q: Remember the old Pace Picante Sauce commercial with a bunch of Texans happily sitting around the campfire, but who became horrified when they realized that their hot sauce was made in New York City? That is how I picture the reaction of some of the president's remaining supporters when they heard that the latest attorney general choice, Michael Mukasey, is from New York City. — Barry McVinney, Little Rock, Ark.

Q: I'm a Democrat and certainly no fan of President Bush, but I think he picked a good attorney general in Michael Mukasey. It's nice to see someone who doesn't seem to be using the job as a way station in between runs for political office. — Barbara Cullen, Denver

A: Sen. Chuck Schumer (D-NY) seems to agree with you, Barbara, which is getting some conservative Republicans a bit nervous. At 66 years old, Mukasey is a career prosecutor, judge and private-practice lawyer who has never run for public office. In that sense, at least, he is like his predecessor, Alberto Gonzales. Going back at least a half-century, there's no shortage of attorneys general who either ran for office before being chosen for the Cabinet, or after:

JANE WYMAN DIES: She was Ronald Reagan's first wife and, unlike Nancy Davis — spouse #2 — she was not known to be political. Wyman's ending of their marriage in 1949 is responsible for making Reagan the first divorced person elected president. And while she never spoke about their marriage, she became an issue, of sorts, as Reagan was preparing for his re-election. In 1983, at a time when a Reagan second term was far from likely and Democrats were touting the "gender gap" between Democrats and Republicans in polling, some feminist groups were attacking Reagan's policies towards women. Throughout the year — and continuing into 1984 and the Democratic national convention in San Francisco — "Jane Wyman Was Right" buttons became popular with the left. Women did feel empowered in '84, and even saw the addition of a woman on a major-party ticket for the first time in history. The euphoria, however, didn't last long. Reagan won a sweeping victory, carrying 49 states.

RECRUITING NEWS: Former New Hampshire Gov. Jeanne Shaheen (D) announces her candidacy for the Senate seat held by Republican John Sununu, whom she narrowly lost to in 2002 ... Rep. Jim Ramstad (R-MN), first elected to Congress in 1990, announces he will not seek a tenth term ... Alan Keyes, an also ran for the GOP presidential nomination in 1996 and 2000, who also lost Senate bids in 1992 (Maryland) and 2004 (Illinois), declares another bid for the White House.

FIRST CAMPAIGNS: NPR is currently running a series featuring the "first campaigns" of the 17 declared presidential candidates. In celebration of the series, what follows is an illustration of the corresponding campaign buttons. Not all are from the candidates' first races, however. We don't have a Dennis Kucinich for mayor item in our collection. The only Tom Tancredo button we've seen is this vendor item from more recent vintage. And of course Barack Obama's first campaign was not his ill-fated 2000 bid for Congress but an earlier run for the Illinois state legislature. Nonetheless, a very impressive collection, one that even O.J. won't be able to get his hands on. 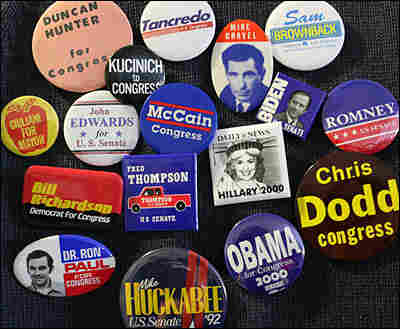 WE'RE ON THE AIR EVERY WEDNESDAY: Reading this column is bad enough; you can also hear a "Political Junkie" segment every Wednesday on Talk of the Nation, NPR's live call-in program, usually at 2:40 p.m. ET (sometimes, if warranted, we start at 2 p.m.; you never know in this wacky business). If your local NPR station doesn't carry TOTN, you can still hear it on the Web.

IT'S ALL POLITICS: That's the name of our weekly political podcast. It's a combination of brilliant analysis and sophisticated humor, hosted each week by NPR's Ron Elving and myself. It goes up on the Web site every Thursday and can be heard here.

Samuel Scheib of Thomasville, Ga., writes, "As one of many of 'the listener,' I must add my voice to the chorus that is clamoring for more of 'It's All Politics.' Of course, I mean I think the show should be longer, not that it should be more frequent (no one could stand that). You sound like you are having so much fun with old Ron what's-his-name and august guests, why not just go a little longer?"

Well, Samuel, if you like our august guests, wait until you see what we have planned for September!

One blogger, Evan Fryer of Andover, Minn., calls Ron and me "smart, clever and analytical," and says of the podcast, "of course, it's geeky, Washington political jibber-jabber. But tying in lots of things historically, this century especially, lends some perspective." (He especially liked our analysis of President Bush's comparing Iraq to Vietnam, and our slogan to commemorate it, "Let Saigons be Saigons.")

And frequent fan Glenn Schmid of Phoenix says he "just wanted to say what a pleasure it was to hear the talented Ms. Linda Wertheimer end her long and extinguished career at NPR on your [Sept. 5] program. That she would choose to draw the curtain here says something about 'It's All Politics' ... although I'm not sure what that would be."

(And no, Linda is not ending her career. Glenn's comments are a takeoff of my tongue-in-cheek conversation with her on the podcast, when I told her that if she was appearing on our show, that must mean her career was all but over.)

This day in campaign history: In the primary for the open House seat left vacant by the resignation of Rep. F. Bradford Morse (R-MA 5th CD), Democrats easily nominate John Kerry, a leader of the Vietnam Veterans Against the War. The GOP picks Paul Cronin, a former state representative (Sept. 19, 1972). Cronin will go on to defeat Kerry in November, even though Massachusetts will be the only state carried by Democratic presidential candidate George McGovern against President Richard Nixon.