Accessibility links
New Mexico: Chile Hot Spot In New Mexico — the largest producer of chiles in the United States — the spicy peppers are more than just a crop: They're a culture, a way of life. And this time of year, the aroma of roasting chiles permeates the air throughout the state. 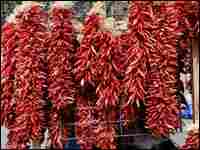 Dried red chiles — strung into ristras — hang in many New Mexican homes and are used for cooking throughout the year. The state is the largest producer of chiles in the United States. hide caption 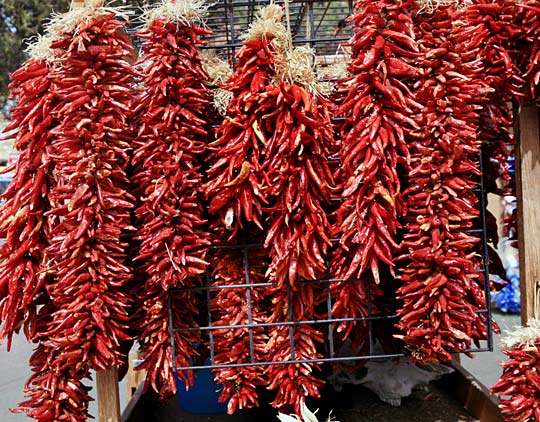 Dried red chiles — strung into ristras — hang in many New Mexican homes and are used for cooking throughout the year. The state is the largest producer of chiles in the United States.

How to Roast Peppers 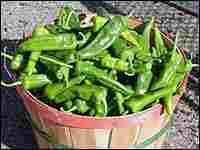 Baskets of green chiles are abundant this time of year at the Santa Fe Farmers Market. Bonny Wolf for NPR hide caption 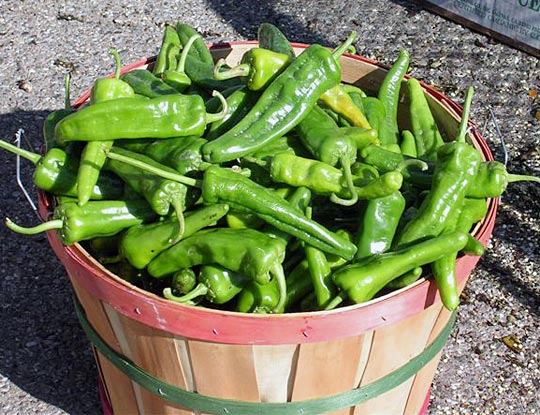 Baskets of green chiles are abundant this time of year at the Santa Fe Farmers Market. 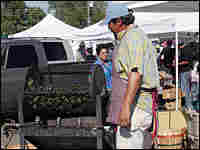 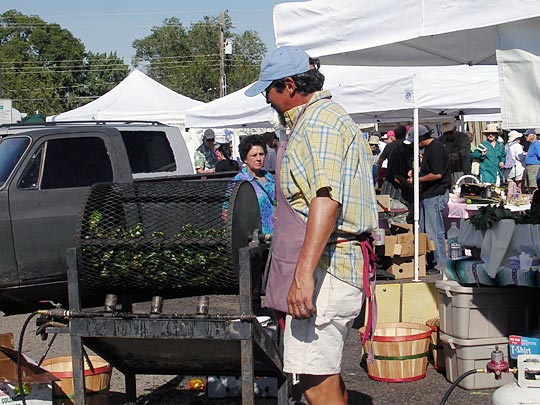 The second I stepped out the door of my friend's house in New Mexico, I noticed a sweet-smoky-earthy smell. No matter how far I walked, the aroma was inescapable.

When I got back, I asked her what it was. "Chiles roasting," she said. "That means it's fall."

During the next 10 days, I learned that whether you're driving on a dirt road in the barren mountains or standing in the parking lot of an Albuquerque supermarket, the deliciously pungent aroma of the roasting of the year's chile crop permeates the New Mexico air from late August through September.

New Mexico is the largest producer of chiles in the United States. But in New Mexico, chiles are more than a crop. They're a culture, a way of life. It is unimaginable to New Mexicans that people eat food untouched by their state's chile.

There's even an official state question: Red or green?

And if you can't decide if you want red chile or green chile, you may answer, "Christmas," and you'll get some of both.

Green and red chiles are actually the same chiles at different life stages: either picked earlier when they're green, or later after they're left to turn red on the vine.

The Spanish conquistadors brought chiles to New Mexico in the 16th century, and they've been part of the cuisine and culture ever since. The chile is so valued that it's been named the state vegetable (even though it's technically a fruit).

Green chiles are roasted, peeled, seeded and either used right away or frozen. Dried red chiles are ground into powder or strung into the lovely, deep-red ristras — strings in Spanish — you see hanging in many New Mexican homes. Northerners usually hang ristras for decoration while New Mexican cooks use the pods throughout the year to season food. Because the climate is so dry, there's no fear of mold.

This time of year, chile roasting is everywhere. You can buy a gunny sack of chiles at the supermarket and take it to the parking lot where someone with a propane-fired, mesh metal roasting drum will roast them for you for a couple of bucks.

Or you can buy them already roasted. I went to the Santa Fe Farmers Market, where chile farmer Matt Romero turns his big roaster by hand. The six-inch-long green chiles tumble around and around until the tough outer skin is charred and blistered. They're bagged and piled on a table for sale. "We sell them as fast as we roast them," he says.

Chile heat varies from year to year depending on the weather, the soil and other factors out of the grower's control. Most New Mexico chiles are medium hot.

The modern New Mexican chile was developed in the late 1800s by Fabian Garcia, a horticulturalist at the New Mexico College of Agriculture and Mechanical Arts — today's New Mexico State University. He wanted to breed a more standardized New Mexican chile.

In 1896, the sheriff of Ventura County, Calif., brought chile seeds back from a trip to New Mexico and planted them near Anaheim. The name stuck, and Anaheim chile is the generic name often given to the New Mexican chile.

However, there has been much breeding and improving over the years, so you'll see chiles called Espanola, Sandia, Nu Mex, Big Jim, Long Green and others.

New Mexico cuisine has been influenced by several cultures: Pueblo Indians, Spanish, Mexican and Anglo. They've been blended together with the chile at center stage. Never call it a chile pepper, by the way, or you will be mocked.

Another New Mexico specialty is the sopapaillas that are served with your chile-infused food. These wonderful puffed breads are the state's own invention. They're made of flour and a little lard and deep fried so they puff up like little pillows. They are served as bread would be and are to be slathered with honey.

You can approximate the foods of New Mexico in other parts of the country. Some poblano or Anaheim chiles will give you the general idea but, really, the flavor's not close to as good. There are, however, many mail-order outlets.

The best way, though, is to visit the state during chile season, breathe deeply and bring a bag of roasted chiles home with you. They freeze well. 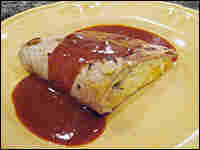 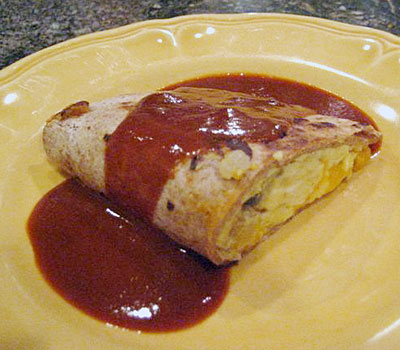 I visited my friend Susan McCreight Lindeborg, a Washington, D.C., chef who recently moved back to her hometown of Las Vegas, N.M. She makes these quesadillas for breakfast during the chile season. They're also good for lunch or dinner. Or a snack.

2 large, fresh green New Mexico or similar chiles, diced (amount may be increased according to size or hotness of chiles)

In a medium-sized saute pan, heat 2 tablespoons of the oil and saute the onion and chiles until both are soft.

In a bowl, beat the eggs until thoroughly mixed. Add the eggs to the onions and chiles and keep stirring gently until eggs are just done but a bit wet. Add salt and pepper to taste.

Spoon a quarter of the egg mixture onto a tortilla, covering only half the tortilla.

Top the egg mixture with a quarter of the cheese and fold tortilla over the mixture, sandwich style. Brush the top of each folded tortilla with reserved olive oil.

In a large saute pan, brown the folded tortillas oiled side down over medium-high heat. While the first side is browning, brush oil on the second side. When the tortilla is lightly brown, gently turn it over to brown the other side. Keep finished quesadillas warm and covered in a low oven until all have been browned.

The quesadillas can easily be cut in half or even smaller.

Serve New Mexican Red Chile Sauce on the side (for pouring over quesadillas or dipping).

Susan's recipe has been adapted over time using both contemporary and historic sources. There are as many methods of making red chile, she says, as there are cooks.

1/2 cup ground dry red medium-hot chile (Chimayo, if you can get it; available at Latino markets)

In the bowl of a food processor, add the chile, tomato paste, garlic, oil, salt, oregano, cumin, flour and 2 cups of boiling water. Process mixture until it is smooth and transfer to a saucepan.

Add the remaining 4 cups boiling water, mix well and bring gently to a boil. Reduce heat and simmer for about an hour.

The chile is done when the texture has thickened enough to coat the food it will be covering. If it becomes too thick, add more water.

Taste the chile before removing it from the heat to make sure the flour has been cooked.

Leftover chile can be stored in the refrigerator for at least a week. 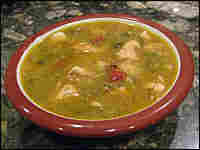 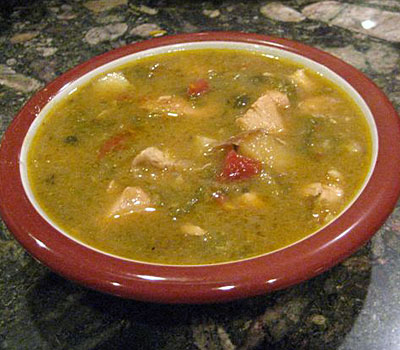 This dish is on the menu of just about every restaurant featuring New Mexican food. It is simple, traditional New Mexican fare and differs according to the imagination and taste of the cook. It can be a plain soup or a thick stew, vegetarian or filled with meat. The only constant is the New Mexico green chile. Since I couldn't get New Mexico chiles, I used a combination California chiles and poblanos. In the off-season, use frozen chiles.

In a large saute pan, heat the 2 tablespoons oil and brown the meat on all sides. Remove from pan.

In the meantime, make the roux. Heat 1/4 cup vegetable oil in large saucepan over medium heat. When it is warm, gradually add flour. It should be the consistency of wet sand. Stir constantly until roux is thickened and lightly browned. Cool slightly then add chicken stock, about a cup at a time, and bring to a boil, stirring constantly. Lower to simmer.

Bring mixture to a boil, lower to simmer and cook until potatoes are tender and chicken is cooked, 45 minutes to an hour.