Accessibility links
The Waterboys: From Punk to Folk : World Cafe The primary force behind the Celtic-tinged folk-rock band The Waterboys is singer-songwriter Mike Scott. As the band's sole permanent member, Scott has seen the band through 25 years and 30 different members. Hear an interview and in-studio performance from WXPN.

Listen
The Waterboys: From Punk to Folk

The Waterboys: From Punk to Folk 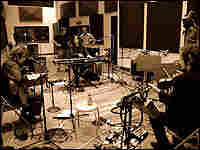 The primary force behind Celtic-tinged folk-rock outfit The Waterboys is singer- songwriter Mike Scott. As the band's sole permanent member, Scott has seen the band through 25 years and 30 different members.

"To me, there's no difference between 'Mike Scott' and 'The Waterboys'; they both mean the same thing. They mean myself and whoever are my current traveling musical companions," Scott says.

Taking inspiration for its name from "The Kids," a track on Lou Reed's Berlin, Scott formed The Waterboys in 1981 upon moving to London from Scotland after college. Immersing himself in the U.K. punk scene, first as a fanzine writer and then in a series of punk bands, Scott soon encountered early collaborators Anthony Thistlewaite and drummer Kevin Wilkinson. Together, they released an eponymous 1983 debut.

Scott later moved to Ireland for a fresh start and began to include traditional Irish musicians to his already-growing list of band alumni. Their 1988 release, Fisherman's Blues, debuted a stripped-down turn-away from rock to folk that continued on into the early '90s.

The '90s did not inspire confidence in the future of The Waterboys. Scott finally rid himself of his band members in favor of studio musicians in New York. He then commenced a lengthy stay at a spiritual commune, giving the impression that The Waterboys were permanently retired.

In 2000, however, Scott resurrected the Waterboys name, started recording with past members and embarked on the first of several successful tours.