Accessibility links
What Does It Take to Clean Fresh Food? Any fresh produce that's grown in dirt, then plucked and processed by human hands, runs the risk of becoming contaminated along the way with microbes that can cause food poisoning. Do you need veggie wash solutions, or can you just rub an apple clean on your sleeve?

Listen
What Does It Take to Clean Fresh Food? 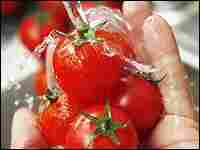 Food can become contaminated anywhere – even in your kitchen.

Find out what you can do to avoid food-borne illness.

Have you ever wondered whether those expensive veggie washes are worth the money?

The editors of Cook's Illustrated, a serious foodie magazine, wondered too. They usually focus on cooking techniques, but recently they looked into techniques for cleaning food.

So the magazine did some comparative testing, by cleaning apples and pears in four different ways. They washed one batch with an antibacterial soap. (That, by the way, is not recommended by food safety experts — nobody thinks swallowing soap is a good idea.)

They washed other pieces of fruit with a solution of diluted vinegar (one part vinegar to three parts water), rinsing afterward with pure water. They scrubbed the third group with a brush, and simply rinsed the fourth group with clean water.

To measure how well each technique worked, they sampled the outside of the fruit with sterile cotton swabs, then rubbed the little bits of grime onto Petri dishes.

Jack Bishop says they next let the Petri dishes sit at 80 degrees for several days to see what bacteria grew. Then they counted how many bacterial colonies were present.

It turns out the scrub brush removed 85 percent of the bacteria — a little more than the water alone.

But the cleaning method that worked the best was the dilute vinegar rinse. It removed 98 percent of the bacteria.

"I've got a spray bottle filled with three cups of water and one cup of white vinegar," Bishop says. "It's in a spray bottle — the kind you'd mist your plants with."

Bishop sprays each apple with about six squirts of the solution — just enough to coat the surface — and then rinses it under the tap.

"The cold water will wash the residual flavor from the vinegar, and finishes the cleaning process," Bishop says. "So it's a 30-second, 50-cent investment."

The technique works best for smooth skinned fruits and vegetables. When you get to broccoli, lettuce leaves, or spinach, produce is harder to clean — as we've learned from recent nationwide recalls. Bishop's team found that soaking lettuce in the vinegar solution works well, but it's a little more labor intensive than spraying apples.

"You're going to have to separate out the leaves. You can't do a whole head. And that may be where it gets to be impractical, because you need a big enough bowl to be three parts water and one part vinegar," says Bishop.

The folks at Cook's Illustrated are not the first to document the effectiveness of acidic washes. Researchers at the Institute of Agricultural and Environmental Sciences at Tennessee State University tested dilute vinegar against plain water and a commercial product called Veggie Wash that they purchased at a grocery store.

"We really did not really find the veggie washes effective or necessary," says Sandria Godwin, who oversaw the project.

Godwin says they do get rid of most bacteria, but her team of researchers found that water works just as well. They found that water can remove 98 percent of bacteria when it's used to rinse and soak produce.

For vegetables such as broccoli or cauliflower that have lots of crevices, Godwin recommends a two-minute soak, even though this contradicts the advice of government food-safety experts who are concerned about cross-contamination of bacteria.

"They're not recommending the soaking of foods because that puts bacteria in the sink itself," explains Godwin. "We still think you should go ahead and do the soak, and wash your sink when you get through!"

For people who aren't willing to go to all this trouble — what about that old technique of rubbing or polishing a piece of fruit on your clothes to get off the grime? There's not much research, but Godwin did have one student look into it a little bit.

"We lined people up in here and had them blow on their apple and rub it on their shirt or lab coats to see if that's effective," Godwin says. "And surprisingly it did something; it's better than nothing. But it really depends on how clean the shirt is."

So, she does not recommend that. Here's a better tip: Since bacteria and dirt are usually trapped at the blossom and stem ends of fruit, the Tennessee researchers say slicing off both ends after rinsing is a good idea.

How to Keep Your Food Safe

Food can become contaminated with harmful bacteria where it is produced, where it is sold, or even on your kitchen counter. Here are some tips on how to prevent food-borne illness: