Berlin: A Cafe for the Chocoholic

Berlin: A Cafe for the Chocoholic 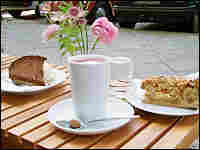 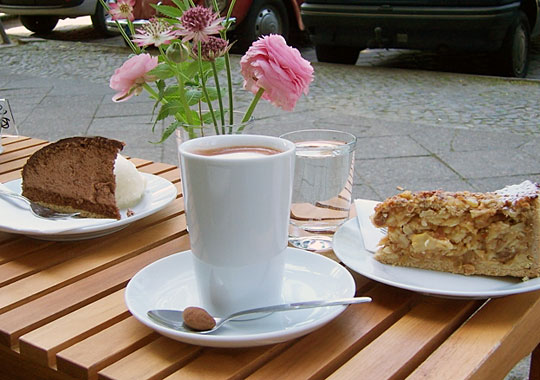 Hot chocolate is the main attraction at Kakao, a cafe in Berlin's hip Prenzlauer Berg neighborhood.

The cafe is called Kakao and the signature creation of the hip Berlin spot tastes nothing like the powder you spoon into a glass of microwaved milk. It's the kind of hot chocolate that Americans often refer to — some in wonderment — as resembling "a melted chocolate bar in a cup."

Since I have actually melted, then drunk, chocolate bars, I'd refute that: Kakao's concoction is better. The drink is rich enough that the water chaser it comes with is welcome. And thankfully, it's not topped with a load of whipped cream, just a touch of milk foam.

My personal favorite is the orange hot chocolate — 60 percent cocoa, 40 percent milk, with orange oil blended in. If you're a serious chocoholic, order the chocolate sandwich too (kakao brot — two thick slabs of crusty dark bread with melted butter and shaved chocolate on top) and for dessert, the antipasti di cacao¬ — a presentation of fresh truffles and other chocolates.

And if you're not so crazy about the stuff, Kakao's menu does offer a few non-chocolate desserts and snacks. There's an apple pie that is really packed with apples. The vanilla ice cream is flecked with bean and tastes fantastic — this from someone who doesn't like vanilla (I tried my friend's).

I was pleasantly surprised on one visit when I really needed to counter all the sugar with something more solid. The "bread and cheese" the barista said was available (after a sort of worried poke in the fridge) turned out to be thick slices of brown bread with two different kinds of hard cheese, rucola and fat olives on the side. Everything on the menu costs less than $10.

In the summertime, it's nice to sit on the narrow sidewalk and watch Berlin's trendiest young families go by. (Prenzlauer Berg has a reputation, built on somewhat suspect statistics, as Germany's most fertile few blocks. It's also just a very hip neighborhood.)

If you eat inside, head to the small back room. There you can lounge on square ottomans by low dark tables and lean back against walls padded with gold, gray, and yes, chocolate-colored cushions. Plan your world travels with the carved map on the ceiling; solid red shows where cocoa beans grow; red circles pinpoint the countries in which the citizens eat all that chocolate.