Accessibility links
Rally in Jena, La., Protests Students' Treatment Thousands of protesters are descending on the small Louisiana town of Jena for a rally in support of six black teenagers jailed for a December schoolyard fight with a white classmate. Activists accuse local prosecutors of being unfairly harsh on the black teens.

Thousands of protesters are descending on the small Louisiana town of Jena for a rally in support of six black teenagers jailed for a December schoolyard fight with a white classmate. Activists accuse local prosecutors of being unfairly harsh on the black teens.

MONTAGNE: Enough is enough. That's the chant of thousands of protesters who are marching today in the small Louisiana town of Jena. They've gathered to show their support for a group of black teenagers who have come to be known as the Jena Six.

The teens were charged in the beating of a white classmate. And the case has become a rallying cry for civil rights activists who say that the initial charges against the teens showed racial bias.

NPR's Audie Cornish is in Jena and joins us on the line. And Audie, where exactly are you and what can you see?

AUDIE CORNISH: Right now I'm standing on the lawn of the LaSalle Parish Courthouse, which is the main courthouse here in Jena, Louisiana. And the street, the entire city block around it, is packed with people, all wearing black T-shirts, and most of those shirts say, Free the Jena Six, or Support the Jena Six.

MONTAGNE: Now, this is something of a saga that began rather simply. It began in an assembly at Jena High School last year when a black student asked the principal if he could sit under an oak tree where it was shady, but where white students had traditionally gathered. Tell us what followed.

CORNISH: Well, what followed was the next day after black students sat under that three, there were three hangman's nooses dangling from one of the branches, and it sparked real tension and complaints from parents. The white students involved were given a small suspension instead of an expulsion as the school principal had originally recommended. And that set off a semester's worth of little fights on and off-campus, almost all racially charged. But to people here it seemed that when white students were in a position to be charged, they were not. When black students get into an altercation, they're charged with what seems like a large penalty.

MONTAGNE: And then, Audie, it escalated from there pretty dramatically.

CORNISH: It did. There were lots of little racial - racially charged little fights on and off-campus. And then in December, one of these fights ended with a white student going to the hospital. That student is okay, but the six boys who were named as his assailants were charged with attempted murder.

MONTAGNE: And where does that case stand now?

CORNISH: Well, only one of the so-called Jena Six has actually stood trial. During the trial, the local prosecutors ended up backing off of the attempted murder charge and bumping it down to battery. That is what Mychal Bell, the student who stood trial was convicted for. And then lastly week a state appeals court overturned that conviction, saying that he should never had been tried as an adult. So now the local prosecutor can try and appeal this decision again. He can try his case again in juvenile court, and that still leaves the question of what about the other battery charges that are still facing the other five students involved.

MONTAGNE: Although none of that - the reduction of some charges and a conviction overturned doesn't seem to have affected today's protest.

CORNISH: No, not at all. I think that the protesters here have very much made it clear that this case is supposed - is just one incident of something they believe happens all over America. And one quote I've seen on almost every T-shirt is a Dr. Martin Luther King quote: injustice anywhere is injustice everywhere. And that seems to be the motto of the demonstrators here, who are saying that what is happening in Jena, the fact that there's limelight on it may be what's affecting the case, may be what led to the charges being (unintelligible) they want keep that spotlight on this case while also drawing attention to the issue at large of young black youths in the (unintelligible) system.

MONTAGNE: Audie, thanks very much.

MONTAGNE: NPR's Audie Cornish talking to us from Jena, Louisiana. 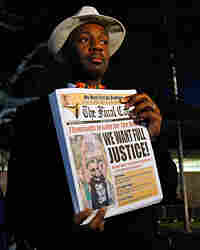 A man holds a newspaper with a front-page story about the Jena Six before the start of a civil rights march in Jena, La., Thursday. Chris Graythen/Getty Images hide caption 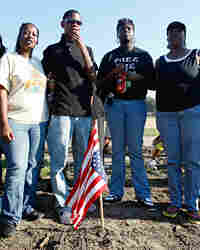 Protesters gather on the spot where a tree once stood on the Jena High School campus. Several nooses were hung from the tree, once a hangout for white students, after a black student sought to sit under it. Chris Graythen/Getty Images hide caption 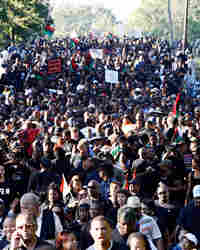 Thousands of demonstrators march in the Louisiana town of Jena in protest of the criminal trial of six black teens charged in an alleged attack on a white classmate. Chris Graythen/Getty Images hide caption

Demonstrators filled the streets of Jena, La., Thursday in support of six black teenagers charged in the beating of a white classmate.

The crowd chanted "free the Jena six," as the Rev. Al Sharpton arrived at the courthouse with family members of the jailed teens.

Sharpton said he and Reps. Maxine Waters (D-CA) Sheila Jackson Lee (D-TX) and William Jefferson (D-LA) will press the House Judiciary Committee next week to summon the Jena district attorney to explain his actions before Congress.

He said it could mark the beginning of 21st century challenge of disparities in the justice system. He also said he planned a November march in Washington.

Meanwhile, a state appeals court on Thursday ordered a hearing on why one of the defendants is still in jail, even though his conviction has been overtured.

The 3rd Circuit Court of Appeal last week reversed the second-degree battery conviction of 17-year-old Mychal Bell, saying he should not have been tried as an adult.

Bell has remained in jail following the district attorney's decision to appeal.

The Rev. Jesse Jackson addressed the demonstrators, harkening back to the civil rights movement of the 1950s and 1960s.

He then led the crowd in a prayer to "solve this crisis without the madness of confrontation."

"Here we are today looking back on Selma," he said referring to the 1965 Selma-to-Montgomery, Ala., marches that became a touchstone of the civil rights movement.

In Washington, President Bush said he is concerned about the racial tensions in Jena, adding that federal law enforcement agencies are monitoring the situation.

"The events in Louisiana have saddened me, and I understand the emotions," he said. "The Justice Department and the FBI are monitoring the situation down there. And all of us in America want there to be, you know, fairness when it comes to justice."

The tensions began a few months ago after three white teens were accused of hanging nooses in a tree on their high school grounds. They were suspended from school, but they were not criminally prosecuted.

Later, the six black teens were accused of beating a white classmate. Five of the black teens were initially charged with attempted murder. That charge was reduced to battery for all but one, who has yet to be arraigned; the sixth teen was charged as a juvenile.

District Attorney Reed Walters has denied that racism was involved in the decision to prosecute the teenagers. He said the suffering of Barker has been largely ignored. The teen was knocked unconscious and his face was badly swollen and bloodied, although he was able to attend a school function that night.

"With all the emphasis on the defendant, the injury done to him and the serious threat to his existence has become a footnote," Walters said of Barker.

Also on hand at Thursday's rally was Martin Luther King III, son of the slain civil rights leader. Like many of the participants, King said the scene was reminiscent of earlier civil rights struggles.

King at times sounded conciliatory, saying punishment of some sort may be in order for the defendants, but adding "the justice system isn't applied the same to all crimes and all people."

It was a similar scene a few blocks away where the NAACP staged a similar gathering at a local park. Dennis Courtland Hayes, interim president and CEO of the NAACP's national headquarters, compared the outcry over the Jena teens to the controversy that followed racial remarks by radio shock-jock Don Imus.

'We're Not Taking it Any More'

"People are saying, 'That's enough and we're not taking it any more,"' Hayes said.

Tina Cheatham, 24, was among those expected to turn out in support of the six teens. The event was heavily promoted on black Web sites, blogs, radio and publications. Cheatham missed the civil rights marches at Selma and Montgomery, Ala., and Little Rock, Ark., but she had no intention of missing another brush with history.

"It was a good chance to be part of something historic since I wasn't around for the civil rights movement," she said. "This is kind of the 21st century version of it."

"This case has been portrayed by the news media as being about race," Walters said. "And the fact that it takes place in a small southern town lends itself to that portrayal. But it is not and never has been about race. It is about finding justice for an innocent victim and holding people accountable for their actions."

"I cannot overemphasize what a villainous act that was. The people that did it should be ashamed of what they unleashed on this town," Walters said.

He also noted that four defendants in the beating case were of adult age under Louisiana law, and that the only juvenile charged as an adult, Mychal Bell, had a prior criminal record.

Bell, who was 16 at the time of the attack, is the only one of the teens to be tried so far. He was convicted on an aggravated second-degree battery count that could have sent him to prison for 15 years, but the conviction was overturned last week when a state appeals court said he should not have been tried as an adult.

Thursday's protest had been planned to coincide with Bell's sentencing, but organizers decided to press ahead after the conviction was thrown out. Bell remains in jail while prosecutors prepare an appeal.