Accessibility links
Fast Computers and the Music of Math On Fast Computers' "Sweden Hasn't Changed, You Have," a minimal, pinball-like loop explodes into a swirl of carnival-esque synth washes evocative of Low-era Bowie. The melody is powerful, haunting and stark, but it also seems organic and natural.

Fast Computers and the Music of Math

Fast Computers and the Music of Math

Sweden Hasn't Changed, You Have 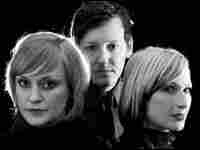 When a band calls itself Fast Computers, it's fair to expect electronic music with calculated beats, programmed sequences and digital production. And, to a degree, the group meets that expectation. The syncopated rhythms and interlocking melodies on Fast Computers' first album, Heart Geometry, fit tightly together as though perfectly measured. Song titles like "Math Predictions" and "Gravity/Love" further betray the band's interest in the mathematical. But the group also uses math to trace intricate musical patterns and ornate designs, using vintage equipment to craft a sound that feels more analog than digital.

The album opens with "Sweden Hasn't Changed, You Have" and a minimal, pinball-like loop that explodes into a swirl of carnival-esque synth washes evocative of Low-era Bowie, but without the dark undertones. The calm, unaffected vocals of Peter Dean concentrate only fleetingly on math: "In a blue rectangle dress she waited..." The melody itself is powerful, haunting and stark, but it also seems organic and natural, a perfect opening to one of the year's most satisfying releases.