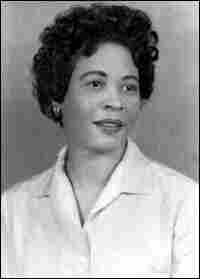 Daisy Bates was the president of the Arkansas state conference of the NAACP and was instrumental in the battle to integrate Little Rock's Central High School in 1957. National Park Service; courtesy Special Collections, University of Arkansas hide caption 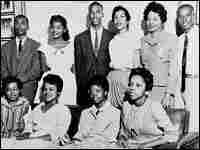 Daisy Bates (second from right in back row) stands with the students known as the Little Rock Nine, in an undated photo. Library of Congress; Courtesy NAACP hide caption 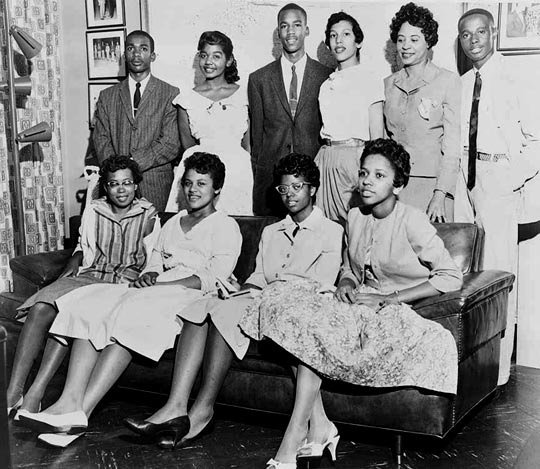 Daisy Bates (second from right in back row) stands with the students known as the Little Rock Nine, in an undated photo.

Looking Back: Brown v. Board of Education 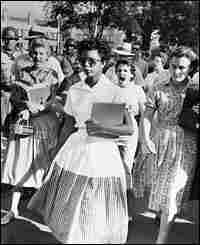 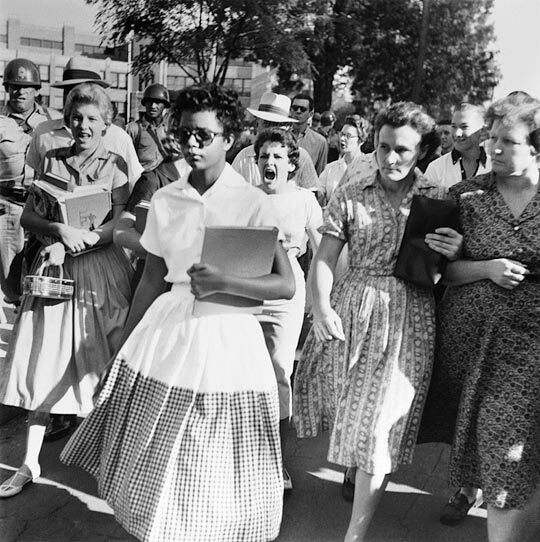 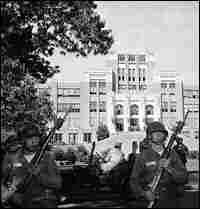 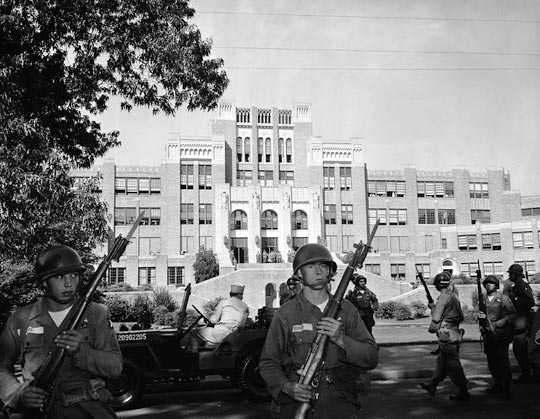 Just over 50 years ago, a rock shattered the picture window of a light-brick house in Little Rock, Ark.

A note was tied to it that read: "Stone this time. Dynamite next."

The house belonged to Daisy and L.C. Bates.

The couple led efforts to end segregation in Arkansas — on buses, in libraries and in the public schools.

"Mrs. Bates was the person for the moment," says Annie Abrams, a friend of Daisy Bates who was one of many black residents active at the time of the crisis.

"Daisy Bates was the poster child of black resistance. She was a quarterback, the coach. We were the players," says Ernest Green, one of the Little Rock Nine, the group of students who integrated Central High School.

"She was conditioned to know that the civil rights movement was moving forward," Sybil Jordan Hampton, one of the first African American students to graduate from Central High, says.

Bates and her husband, L.C., were a team: She was the president of the Arkansas NAACP; he was its regional director. He was the publisher of the largest black newspaper in the state; she was his star reporter.

"The reason they were larger than life ... Daisy and L.C. were always challenging whatever the prevailing attitude of white authority, of segregation, of restrictions of Jim Crow," Green says

The story began in 1954 when the Supreme Court called for an end to segregated schools.

Daisy Bates and the NAACP took the Little Rock school board to court.

At the time, Green was attending Dunbar High School, the all-black in Little Rock.

"Daisy was in the papers indicating that she was going to challenge the Little Rock School Board to adhere to the '54 decision. So the reason that they put together this plan was because Daisy forced them to put the plan together."

The plan could work only if there were students — children really — willing to be the first to possibly face violence and defy the segregationists.

Daisy Bates helped recruit them, bright kids the school board couldn't turn down.

"I've known Ms. Bates since I was probably two years old and I was a paper carrier for their newspaper from the time I was six," says Hampton. She was one of the children considered, though she wasn't selected as one of the original nine.

Daisy Bates did win some parents over — even as the school board was pressuring them to keep their children at the all-black high school.

"You really needed a woman to go and talk with families and to give the assurance that the students were going to have a touch point of comfort," Hampton says. "But she also was a very beautiful woman and the national press and other people found it just wonderful to have this star-quality black woman."

Bates wore high heels and stylish dresses, and her friend Annie Abrams recalls her as one of the most glamorous, sophisticated black women in town.

Bates had no children of her own, but she was "hungry for children and children were attracted to her because she was a Lena Horne in our town."

It was unusual, in an era when black leaders were almost always men, for a black woman to take a leading role — especially in a drama that was playing out on the national stage.

'Blood Will Run in the Streets'

On the first day of school, Faubus ordered the Arkansas National Guard to turn the students away.

Some two weeks passed and the nation waited to see what President Eisenhower would do.

Sending in the Troops

"The house was buzzing with media and people in and out," Trickey says. "Things were happening. I mean, [civil rights lawyer] Thurgood Marshall was his amazing self. He explained things to us at a certain point and there were quite a few great minds there who were passing on information and laughing, talking."

Green adds, "What I remember at Ms. Bates' house is that you had all of this drama going on, but we were still teenagers. We were worried about how we were going to look getting into the jeep. Why couldn't we have two jeeps, instead of one. And Daisy said: 'Look, this is a very important moment. The fact that the president of the United States has sent the United States Army here to escort you into school means that this government is finally serious about school desegregation.'"

Eisenhower had acted, sending in the 101st Airborne to escort five boys and four girls to high school.

The next days and weeks, Daisy Bates' house was still headquarters for the Little Rock Nine.

By week's end, Central High had been integrated.

Green — the only senior in the group — graduated the following spring.

Martin Luther King Jr. attended the graduation ceremony. Daisy Bates could not. Her face and name were better-known in the city than King's, and her presence might have stirred violence.

Trickey, one of the Little Rock Nine, says that Bates, who wrote a book in 1962, took too much credit for her role in the drama.

"Actually I think she has in her writing expanded what her role was with us," Trickey says. "And part of that is unfortunate because she emerged as the spokesperson for the Little Rock Nine. And our parents, by and large, were silenced.

"Mrs. Bates was an extraordinarily complex woman," Jordan says. "An incident thrust her into the forefront of a movement. And I always have felt that Mrs. Bates was a tragic figure."

Fifty years on, the woman who had been at the center of the Little Rock movement is barely remembered. Her home, where it all happened, was nearly lost after her husband passed away and money was tight.

Daisy Bates died in 1999. She became the first — and still only — African-American to lie in state in the Arkansas Capitol, the same building once occupied by Gov. Faubus.

On that same day, the Little Rock Nine were honored at the White House by Bill Clinton, the president from Arkansas.

The following events occurred in 1957, three years after the decision of Brown vs. Board of Education, which declared racial segregation in public schools unconstitutional.

Aug. 27: The Mother's League of Central High School, a group of women from Broadmoor Baptist Church with ties to a segregationist group, has its first public meeting. After discussing "inter-racial marriages and resulting diseases which might arise," they decide to petition the governor to prevent integration. Lawyer Amis Guthridge draws up the document and Arkansas Gov. Orval Faubus supports it. Mrs. Clyde Thompson, recording secretary of the Mother's League of Little Rock Central High School, files a motion seeking a temporary injunction against school integration. Her suit also asks for clarification on the "segregation" laws.

Aug. 29: Pulaski County Chancellor Murray Reed grants the injunction, on the grounds that integration could lead to violence.

Aug. 30: Federal District Judge Ronald Davies orders the Little Rock School Board to proceed with its plan of gradual integration and the opening of the school on Sept. 3, and nullifies Reed's injunction.

Sept. 2: (Labor Day) Gov. Faubus orders the Arkansas National Guard to prohibit nine black students from entering Central High School. In a televised speech, he states that he did so to prevent violence. Afterward, the school board orders the nine black students who had registered at Central not to attempt to attend school.

Sept. 4: Nine black students attempt to enter Central High School, but are turned away by the National Guard. One of the nine, Elizabeth Eckford, does not have a telephone and so was not notified ahead of time of the change in plans. She arrives alone at the school to face the Guardsmen alone. She is able to reach a bus stop bench and Mrs. Grace Lorch, a white woman, stays with her and boards the bus with her to help take her to her mother's school.

Sept. 5: None of "the nine" try to attend school. The school board asks Judge Davies to temporarily suspend its integration plan.

Sept. 8: Gov. Faubus goes on national television to re-affirm his stand and insists that the federal government halt its demand for integration. When confronted to produce evidence of reported violence, Faubus refuses.

Sept. 10: Judge Davies tells the United States Justice Department to begin injunction proceedings against Faubus. He schedules a hearing for Sept. 20 for a preliminary injunction.

Sept. 14: Gov. Faubus meets with President Eisenhower in Newport, R.I., to discuss issues of the prevention of violence and the desegregation of Arkansas' public schools. "I have assured the president of my desire to cooperate with him in carrying out the duties resting upon both of us under the Federal Constitution," Faubus says in a statement. "In addition, I must harmonize my actions under the Constitution of Arkansas with the requirements of the Constitution of the United States."

Sept. 20: Judge Davies rules Faubus has not used the troops to preserve law and order and orders them removed, unless they protect the nine black students as they enter the school. Faubus removes the Guardsmen and the Little Rock police move in.

Sept. 23: An angry mob of more than 1,000 white people curses and fights in front of Central High School, while the nine black children are escorted inside. A number of white students, including Sammie Dean Parker, jump out of windows to avoid contact with the black students. Parker is arrested and taken away. The Little Rock police cannot control the mob and, fearing for their safety, remove the nine children from the school. Three black journalists covering the story are first harassed and then physically attacked and chased by a mob. They finally run to safety in a black section of town. President Eisenhower calls the rioting "disgraceful" and orders federal troops into Little Rock.

Sept. 25: Under troop escort, the nine black children are escorted back into Central High School. Gen. Edwin Walker, U.S. Army, addresses the white students in the school's auditorium before the nine students arrive.

Oct. 1: The 101st Airborne turns over most duties to the federalized Arkansas National Guard. Discipline problems resurface at Central for the remainder of the school year.