Accessibility links
Maj. Gen. Gaskin on the State of Iraq Marine Maj. Gen. Walter E. Gaskin talks with Farai Chideya about the future of Iraq following the death of Sheikh Sattar, the leader of the movement to fight al Qaeda in Al Anbar province and beyond. Gen. Gaskin commands the 25,000 troops of the Multi-National Force West.

Listen
Maj. Gen. Gaskin on the State of Iraq 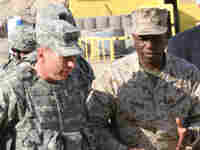 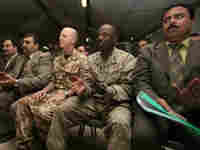 The White House has said repeatedly that its strategy of a military surge in Iraq is working. To drive the point home, the Bush administration highlighted a new pact between U.S. forces and Sunni leaders in al Anbar province — a region in Western Iraq, once a former al-Qaida stronghold.

For more on the success story, Marine Maj. Gen. Walter E. Gaskin spoke exclusively to NPR's Farai Chideya. He heads the 35,000-member Multi-National Force West, which patrols al Anbar. He is also one of the highest ranking African Americans in the U.S. military.

The following transcript is an excerpt of their interview:

So I understand that some 2,200 Marines are going to be pulled out by the end of the month. So how is that going to affect your performance in al Anbar? It seems like a lot of men. Are you going to be able to keep things together the way you have been?

Well, as you are probably aware, they came in as a part of the surge force with a particular mission. And we were able to accomplish that mission. It's a part of an ongoing mission to eventually turn that area over to the Iraqis. So they were placed in part of the area that they covered by the Iraqi Army. It was very good having them aboard and having them be able to do the work up there.

Let's turn to more of the local issues. There was the assassination of a key ally, Sunni Sheikh Sattar Abu Risha. So how important was the sheikh to your efforts, and what does his death mean in trying to hold onto peace or create peace in the region?

I think as tragic as the death of Sheikh Sattar, that we have seen nothing that indicates that his movement and the awakening for the Sawah Allah Iraq will fragment or be broken.

What he did for us was he was a galvanizing force. He motivated the people of Anbar in particular and the Iraqis in general to stand up against al-Qaida, reclaim their country. He characterized an awakening. His brother, Sheikh Ahmed, who is a leader in his own right, will be able to step forward.

I knew Sheikh Sattar ... I liked him. And even though, like others, I express sincere condolence for his death, he is truly a martyr, and I think his death will cause a number of those who were probably on the fence to wake up and see that al-Qaida means them no good — and to the point that they would remove such a national hero from among them.

Al-Qaida in Iraq has carried out some brutal attacks against the local Sunnis. But are you ever concerned that in your training of the local Sunnis, once you leave, they'll turn against their Shi'a neighbors and the country will descend into civil war, that you're training people who might then go and as part of the inter-country violence be trained to kill each other?

Well, the sectarian violence that they talk about is not religious; it is political. Sattar's mother was Shi'a. There is a growing desire for them to get past the political divide and get on with the economic development. They are not fighting for me or the coalition forces; what they're fighting for is their own country. The idea that they are going to somehow return to the fighting among themselves is ludicrous. They have a purpose and that purpose is to reclaim their country.

They will make the same mistakes that any developing nation will. But rest assured, there is no fighting for their country. They are fighting for the ability to have a country — and without outside influence, as in Iran, or interference, as in foreign fighters.

But when the president came to al Anbar, to Iraq, there was some tussling over money. The local Sunnis were saying, "Oh, the Shi'as in Baghdad don't actually want to fund the projects that we're supposed to get rebuilt." And so, how do you deal if you're talking about this as a political and economic wrangle, as opposed to a tribal or religious wrangle? Even then, it seems as if there's not always a spirit of cooperation.

Well, if you recall, three days after the president was here, we had an Anbar forum too, where the vice president came out to Anbar. And one of those things was to bring forth a promise from Prime Minister Maliki that offered $70 million of supplemental. That was in addition to the budget of 107 million (dollars).

What is often misunderstood is that the government — the central government — and its ability to provide for the municipal and the provincial government is based on a relationship of developing budgets. This province, the cities within this province never before had to develop a budget. They were basically, under the Saddam days, were given money and told that's it. So now, as they go through learning how to rebuild cities based on the destruction, development of the state-owned enterprises, that is interaction that happens in every country.

And it definitely happens for a very struggling relationship, which is sometimes very, very new and dysfunctional in some cases. And when you throw in the political aspects of Shi'a actually running together and Sunnis who are trying to get that relationship — political relationship so that they can best serve the country — will be a tussle; I mean, that's politics. I think they are making remarkable progress. But to say that they are not doing anything because of learning the type of government they are doing, I think is an understatement.

Let's turn directly to some of the experiences that you and your troops are having. When the president came, he said Anbar is a huge province. It was once written off as lost. It is now one of the safest places in Iraq. But it still remains the second deadliest province for U.S. troops. So how do you reconcile that statement with what you and your Marines are living on the ground?

Well, first of all, you have to understand what Anbar represents to the Arab world and to Iraq. Anbar is approximately the size of the state of North Carolina; 90 percent of the population lives along the Euphrates River, which runs anywhere from about 1.3 to 1.4 million. Anbar has been declared by al-Qaida and the city of Ramadi as the Islamic state. Anbar touches three nations — Saudi Arabia, Jordan, and Syria — and it is the gateway into the land between the two rivers. Last year, when they — meaning al-Qaida — was at the height of its destruction, murder, and intimidation in efforts to claim this area as the beginning of its Islamic state, it was. And there was a lot of fighting.

We have been able to root al-Qaida out of the population centers. What that has done is separate, as you would want to in a classic counterinsurgency, separate the insurgents from the people. People didn't want that type of thing anymore. And so, we've been able to use indigenous people, joining the military, joining the police, and we've placed those police in the cities, in the numbers that provide security for the people so that they can know what it's like to have a normal life.

So that's why the president can say this is remarkable in that that transformation occurred over the last seven months. So yes, it's peaceful out here, but I take nothing for granted. I know that al-Qaida would like to come back. And I know that al-Qaida is embarrassed, because they read the news and hear the papers of how they have lost. But the people, that's the important thing.

Well, I think it's a two-way street as far as African Americans joining the military. For the Marine Corps, we are still holding at approximately the same level as society. That to me is problematic in that we must continue to offer and get young African Americans to understand that the military is opportunity.

At one point, especially when I was a young man fresh out of high school and college, the military offered opportunities beyond what we could receive in society by joining the military, where there was instant recognition and it was a meritocracy for your merit. What you did, you earned regardless of color, ethnic, or national origin. Somehow, over the years, as opportunities have gotten better in society, there is a somewhat loss. And this is across all ethnic groups. But because of the numbers of minorities — African Americans in particular — it spans out.

Oh, absolutely. I think when we said that we learn cultural experiences in order to better understand the Iraqis, having been in a minority, having had the chance to really realize that you are a leader of all, I think that experience has helped me well. And I fully understand it.