Accessibility links
For Ken Burns, a 'War' Not as Advertised When Ken Burns set his sights on World War II, he found a far different conflict than the "good war" we've come to know. His new PBS documentary, The War, tells the stories of young soldiers who are now dying off by the thousands.

Listen
For Ken Burns, a 'War' Not as Advertised 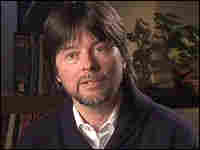 Videos from 'The War' 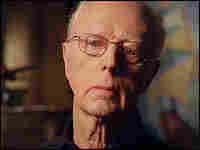 In a scene from The War, Quentin Aanenson, a fighter pilot from Luverne, Minn., describes pulling the trigger for the first time. American Lives II Film Project, LLC hide caption

Still, for years World War II veterans urged Burns to tell their stories. And then he read an alarming statistic: 1,000 veterans of that war die each day.

This Sunday, PBS will debut The War. Six years in the making, Burns' series includes accounts from veterans like fighter pilot Quentin Aanenson. In a letter he wrote, but never mailed, to his future wife, Aanenson said:

"I live in a world of death. I have watched my friends die in a variety of violent ways. So far I have done my duty in this war. I have never aborted a mission or failed to dive on a target. I have lived for my dreams for the future, but like everything else around me, my dreams are dying too."

Aanenson is from Luverne, Minn. Burns chose that town and three others — Sacramento, Calif., Waterbury, Conn., and Mobile, Ala. — to frame his documentary. It allowed him to evoke World War II's impact on the home front and on those who left home in order to fight it.

"I felt that most Second World War documentaries never told the story of the war simultaneously," Burns tells Renee Montagne.

Other films touched on either the war in Europe or the Pacific, "and if you do the home front, it's in a separate film," Burns says. "And we felt that we wanted to do all three simultaneously. The way to do that was to anchor it in these, at least initially, peaceful places."

The filmmakers used that peacefulness as a contrast to the brutality and human loss of war, Burns says.

"You begin to understand that this is a far different war that we've sort of in the last decades been led to believe," he says.

With the World War II veterans dying, it was time to "honor what they did when they were teenagers," Burns says. "We asked them to become professional killers. They did their job very well. They saw bad things, they did bad things, they lost good friends.

"And they came back and they put a lot of that information in deepest, darkest recesses of their souls and it has been our privilege in recent years that some of those folks have now begun to speak."