Accessibility links
Global Dairy Demand Drives Up Prices The global market comes into play even for a product as local as fresh milk. Limited supply and big demand are driving up the price of dairy products. 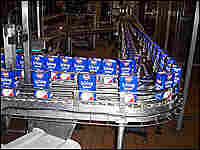 Freshly-boxed whipping cream rolls off the conveyor at the Frischli factory in central Germany. Prices of all milk products are rising worldwide, due to what some call a "perfect storm" of low supply and high demand. Khue Pham, for NPR hide caption 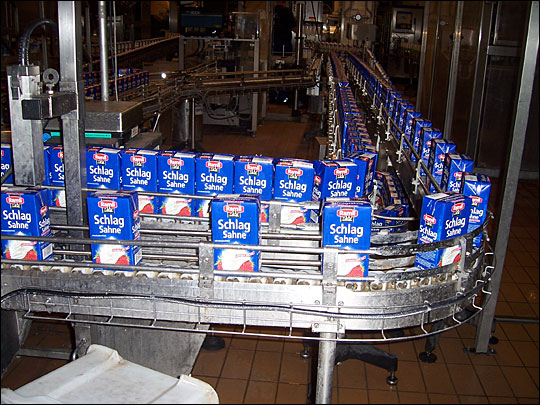 Freshly-boxed whipping cream rolls off the conveyor at the Frischli factory in central Germany. Prices of all milk products are rising worldwide, due to what some call a "perfect storm" of low supply and high demand. 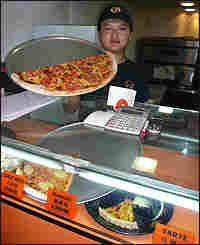 If you've been shopping for cheese or milk lately, you may have had to dig a little deeper into your wallet. Dairy prices have been rising fast not just in the U.S., but around the world. Even for a product as local as fresh milk, the global market comes into play.

"Prices are shooting up for virtually every dairy product you care to name," says Chris Horseman of Agra Informa, a company that tracks food commodities.

Jan Hausmann, a dairy farmer near Germany's northwest coast, got about 10 U.S. cents more for each liter of milk in August than in the same month last year. At his farm, with 650 cows giving a total of about 8,000 liters per day, those dimes add up.

"It's a good thing for us. It started in June, and it also looks good for next year," Hausmann says. "We won't be rich, but we will do better business."

He sells his milk to a dairy processor, where it's packaged to drink or made into pudding, butter or skim-milk powder — an ingredient that is bumping up the price of dairy.

Few people think of skim-milk powder when they look at the sticker price on a gallon at the supermarket. But this powder is used in a wide range of foodstuffs, and its price has shot up to record levels worldwide — almost twice as high as last year.

Hans Holtorf, who owns the German dairy manufacturer Frischli, says the powder's price was the first to increase among dairy products.

"Then retail prices went up. Then, suddenly, there was a butter shortage, [and] cheese [prices] went up," Holtorf says. "And by now, prices for wholesale products have also gone up. The question is how long this will continue."

Fresh milk is still a very local product. It can't be transported very well from Germany or Iowa to China, for example, where demand for dairy products is rising. But powdered milk, cheese and butter can easily be moved around the globe, and as their prices rise, analysts are watching for shifts in production. Agra Informa's Chris Horseman says if a lot of producers chase the high price for milk powder, that could affect the cost of other products.

"That means there's going to be that much less milk available to cover any other uses," Horseman says. "Which means whether it's liquid milk or whether it's cheese or yogurt, the price gets pulled up right across the board ... because there's only a finite amount of milk."

Agricultural economists say today's milk shortage is basically a case of low supply and high demand worldwide. Supply is down for many reasons. A bad drought in Australia dried up the grass that the country's cows eat. New export taxes were added on Argentina's milk in an attempt to keep the country's food prices under control. Also, European farmers can't significantly increase production until a quota system is phased out eight years from now. The U.S. and Europe always used to have spare dairy products to sell cheaply around the globe, but that's no longer the case, says market expert Erhard Richarts.

"In the European Union, we used to have surpluses, and all these stocks have been sold out," Richarts says. "Milk powder [has been sold out] already [for] over a year, and the last butter has been sold in April, from stocks. And immediately prices went up."

Warehouses in Germany and elsewhere that were once full of frozen butter are now empty — or they're now chilling frozen pizzas or peas. So where is all this demand for dairy products coming from? Torsten Henne of Germany's IFCN Dairy Research Center says consumption is up all over the world, particularly in the Middle East and Asia.

Experts say that animal feed prices are rising, partly because biofuel crops are replacing cow fodder. In turn, the high priced animal feed pushes up the cost of milk. But these explanations are trends, not events that clearly explain why dairy prices really shot up in early summer.

Horseman says the rising prices may have temporarily spooked the dairy industry.

"There were certainly elements of panic buying, I suspect, as processors suddenly thought, 'Wow, there is a real possibility that after years and years and years of surpluses, we might not actually have enough milk to meet our needs. So we better make sure that doesn't happen,'" he says.

Production has already started to increase in the U.S., but many market watchers say long-term trends indicate that milk won't be bottoming out again any time soon.