Accessibility links
Kansas City Artist was Master of the Heartland Thomas Hart Benton brushed aside the prevailing modernism of his time to create naturalistic scenes of America's heartland. From his Kansas City studio, he painted giant murals that gave prominence to the working-class people and small farmers of Middle America.

Listen
Kansas City Artist was Master of the Heartland 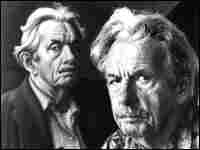 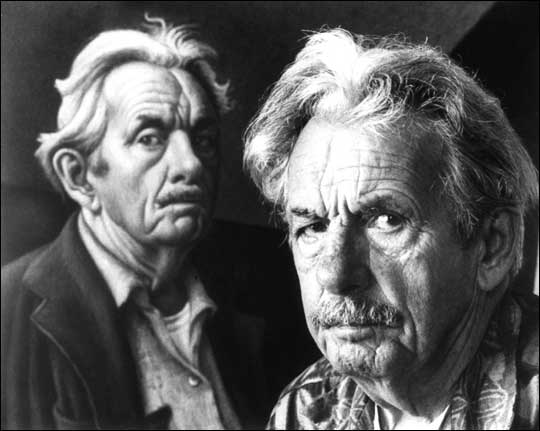 Thomas Hart Benton poses next to his self-portrait. 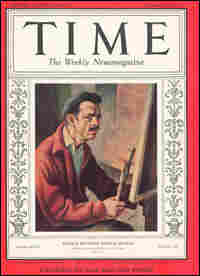 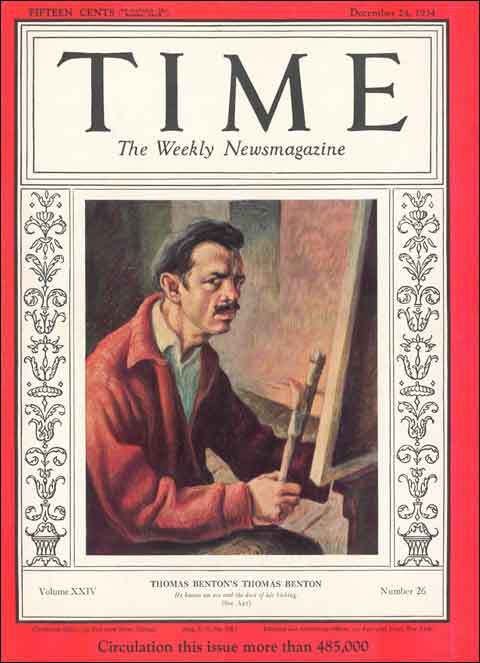 The Dec. 24, 1934, cover of 'Time' magazine featured another of Benton's self-portraits. The cover story, the magazine's first about an artist, was titled 'Thomas Benton's Thomas Benton.' 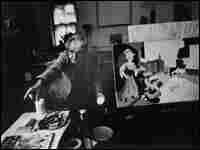 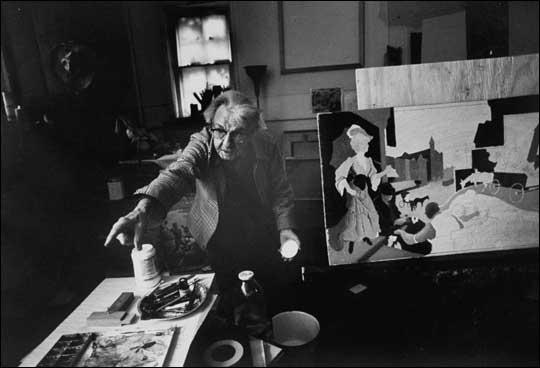 If Kansas City is a cathedral for what it is to be American, Thomas Hart Benton painted the ceiling. In the 1930's, his stylized figures and mural-size scale got him Time magazine's first cover story on an artist.

But styles change — and Benton didn't. He wasn't "new" anymore when he and Rita, his wife and business partner, left New York after 20 years and came back to Kansas City.

The Bentons bought a home there in the late 1930's. There was an old stable out back where Benton could put in a big, north-facing window. He added a cast-iron wood stove and he went to work making art.

Inside, Benton's grandson, Anthony Gude, studies the now-quiet space, a union of studio and workshop: saws, chisels, packing crates — and paint. An eight-foot easel holds a large, blank canvas, partly covered with a linen drop cloth — just as Benton left it. The air smells abandoned, but the light is still good.

Gude says he hasn't been back in nearly 20 years. And in that time, the house has gone through quite a few changes.

"But the studio remains very intact," he says. "It hasn't changed since the day he died. To me, that's where the spirits or ghosts, if you will find them, will be."

Gude says he used to come to the studio and watch his grandfather paint, sometimes dabbling himself with drawings or playing with clay. He and his family often posed as figures for Benton's murals. Gude especially remembers a mural destined for the Country Music Hall of Fame in Nashville:

"He was very particular about making sure that the musicians in the mural were all playing the same chord," says Gude. "If you play a violin or a guitar or the dulcimer, you know the hands are in the right position."

And all of the musicians in the painting are definitely playing the same chord, says Gude.

The Bentons loved food and drink, and a table of people. Their dinner parties were artfully managed by Rita. In the afternoon, she'd walk out back to the studio, go through Benton's most recent work, and pick some pieces to display where the guests — and patrons — would see them. An authentic Thomas Hart Benton! In the Benton home! He didn't need a gallery; he had Rita, and his home.

John Callison bought some of those paintings — and stayed close with the family. So he was there that night in 1975 when Benton had just completed the country music mural.

"He went out and sat down to sign the mural and had a massive heart attack and died," recalls Callison. "In fact, his watch was stopped at 7:15, where it hit the floor."

The mural was never signed. Rita Benton lived a few months more, and then she, too, was gone.

Thirty years later, the clapboard and stone building still seems like someone's home. Tom and Rita Benton's things are here: couches, chairs, rugs, an entry table. The place invites you in — as the art does.

"His great, great uncle, Senator Thomas Hart Benton from Missouri is not included in the mural in the Missouri state capitol," Sitton explains. "Tom said that mules did more for the development of the state than Senator Benton ever did."

Burton Dunbar, a Kansas City art appraiser, says it's not uncommon to get a call like one he received a few weeks ago: a family has some Bentons; can he come take a look?

Think about how Rita Benton sold those paintings: straight out of the studio, into the dinner party, then home with a guest. There must be many works that Tom and Rita Benton saw, and the families that got them still see, but no one else has ever seen. For an art historian, this is about possibility.

"You kind of want to shout 'this is the "Benton" Benton that we've been looking for,'" exclaims Dunbar, "and this is, I know, Benton at his finest hour."

Burton Dunbar has seen these unknown works with Benton's price notations on the back — $1,500, say. Some of those paintings are worth millions now. Even so, Dunbar says, most of the time his clients listen to his valuations and then they thank him.

In Kansas City, they keep their Bentons.