Accessibility links
Revisiting Rare Tracks with Emmylou Harris When Emmylou Harris set out to compile a career retrospective, she didn't pick the recordings that made her an acclaimed country singer. Instead, she selected five discs' worth of rareties and forgotten gems. Hear an interview and live performance. 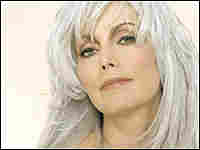 Emmylou Harris performed these songs from Songbird for NPR. She was joined by Buddy Miller in the Blackbird Studio in Nashville, Tenn.

When musicians make recordings, they make countless decisions. What to keep and what to discard may be the most important.

Songbird is her new five-disc box set — 78 CD tracks plus a DVD — compiling memorable moments in her musical journey. The career retrospective is not a greatest-hits collection, though. Instead, Harris decided to feature rare outtakes, live recordings and other overlooked gems from her extensive discography.

"I figured it was time to showcase some things that maybe people might have glossed over, including myself," she says.

Harris joined Weekend Edition Sunday's Liane Hansen for an interview and studio performance of some of the songs on Songbird.

"There were a lot of interesting projects that were just scattered everywhere, and you just want to be able to collect them and make them available to people," Harris says.