Accessibility links
'Dough' Tells Story of a Bakery with a Secret In 1994, an unexpected call from a banker gave Mort Zachter his first clue that his family had a net worth in the millions. Zachter, who been living paycheck to paycheck, tells the story of the family business that led to a surprising windfall in Dough.

Listen
'Dough' Tells Story of a Bakery with a Secret 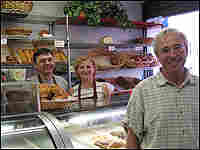 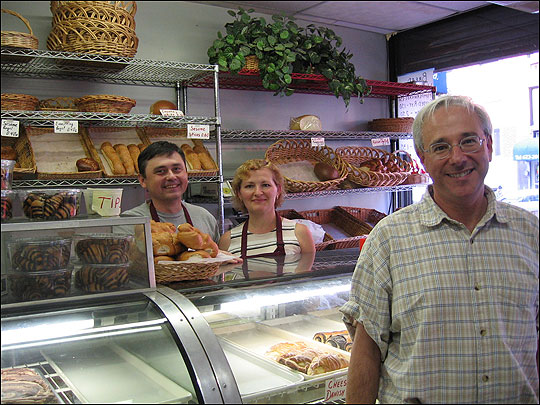 Author Mort Zachter, right, with the current owners of the Ninth Street Bakery, Oleg and Tetyana Kucherenko. When Zachter was growing up, the shop was known in the neighborhood as "the day old bread store."

In 1994, a banker called Zachter's home and asked him if he'd like to take control of his Uncle Harry's million-dollar money-market account. It turned out that two of his uncles had quietly amassed about $6 million, scattered in separate accounts.

Zachter's windfall let him pursue his dream of writing. His new book Dough: A Memoir, is the culmination of that dream. It's also a story of daily life at the family's bakery from the 1940s through the '60s and a snapshot of immigrant life in New York.

After his windfall, Zachter delved into his family's secrets. He never found out why his uncle sat on his wealth rather than helping the family, but he realized that his uncles — like other children of immigrants who had survived the Depression — had a complicated relationship with money.

His uncles Harry and Joe drafted most of the family to work at bakery, which sold bread they bought wholesale from other city bakeries. Zachter's mother — his uncles' sister — gave up her dream of teaching to work at the bakery.

Her payment was leftover bread at the end of the workday. Zachter's father pitched in after his regular hours as an insurance claims examiner. Zachter grew up sleeping in the dinette of his parents' one-bedroom apartment, with his head next to the refrigerator.

Though Zachter's uncles weren't generous with their own family, they were magnanimous with their patrons. They helped pay their patrons' bills and they would often change the price of bread depending on what they knew customers could afford.

Though Zachter could be bitter about his family's years of scrimping and financial secrets,Dough shows affection for his quirky uncles and his close-knit family as they run a beloved family business.

Jacki Lyden visited Zachter at the bakery in New York, which is now under new ownership. 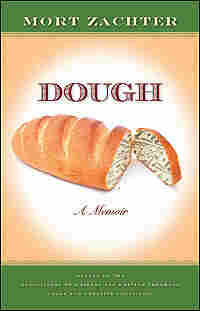 I'm opposed to millionaires, but it would be a mistake to offer me the position.

On a sweltering August afternoon, the clatter of jackhammers blasted through the open dinette window. I sat in the hallway next to the only phone in my parents' Brooklyn tenement. Their apartment had no air conditioning — never did, never would — and my backside stuck to the vinyl seat cover of the telephone chair. The black rotary phone rang. I looked down at the dusty piece of history and imagined Alexander Graham Bell calling from the great beyond. I picked up the receiver, which felt heavier than I remembered. "Hello."

The voice was old but quite lively. Mr. Geary sounded Irish, but I had no idea who he was.

"Yes." I was Mr. Zachter, just not the Mr. Zachter he thought he was talking to.

I was hearing things. No one in my family had that kind of dough. The heat had gotten to me. It must be a misunderstanding. A practical joke. I stared at the river of stains running down the walls from the ceiling. When I had lived here as a child, sleeping in the dinette with my head next to the Frigidaire, the upstairs apartment bathroom had leaked. Some things never change.

"Yes. This is Mort Zachter. My dad is in the hospital. He had surgery for colon cancer and won't be home for a while. Who are you?"

"I'm your uncle's stockbroker, known him forty years. I've been working with your father recently."

At that moment, Uncle Harry, who had moved in with my parents two years before due to his dementia, sat in the living room, slowly sinking into an upholstered chair with broken springs, his feet resting on a well-worn patch of carpet. His uncombed hair was more yellow than gray, his face paper white; his eyeglasses rested on the tip of his nose, but his eyes were vacant. He needed a shave.

"Mr. Geary, did I understand you correctly? Did you say my uncle has a brokerage account with a million dollars in the money-market fund?"

I let that settle in for a minute. I didn't know how to respond. Growing up I had felt poor—not a homeless, hungry, dressed-in-rags poor, but a never-discussed sense that we simply couldn't afford better. Not better than our one-bedroom apartment, not better than vacations in Art Deco dives on Miami's Collins Avenue only in the summer, and not better than view-obstructed seats behind a pole at the old Yankee Stadium. At thirty-six, I knew lives of not-better-than plus a million dollars didn't add up.

Mr. Geary broke the silence. "Would you like me to send you the papers to get signed giving you power of attorney over the account?"

That was a loaded question if ever I heard one. Would I like financial control over an account with a million dollars?

"Yes, Mr. Geary, you could mail us those papers."

Mr. Geary assured me he would mail the papers out that day. I hung up and staggered to the dinette. Uncle Harry slept there now. The ancient Frigidaire that mom had defrosted by hand every few weeks when I was a child had finally been replaced by a self-defrosting GE. I perched on the edge of the bed, across from my old wood-laminate desk. A deep, jagged crack in the side of the table top ran above one of the legs. One false move and the leg would break off. When I was a child the table was whole.

Back then, the first thing I would do when I woke up was look out the dinette window. The early morning sunlight would filter through the coarse green burlap Mom had sewn for a curtain. Below our second-floor window was the cement courtyard where I had played stickball, baseball box-ball, ring-o-levio, and the other street games of Brooklyn. In the fall, the wind would rustle through the leaves of the ailanthus trees that grew in a fenced garden in the back of the courtyard, fertilized by little more than rubbish. Best known as the tree of heaven, the ailanthus thrives in poor neighborhoods; it requires only water and sunlight. I would watch the twisted blades of its seeds spiral down like airplane propellers. I loved to pick up those fallen seeds, split them open at the sticky end, and attach one to the bridge of my nose like a rhino's horn. Yet whenever I plucked one of those bright green leaves and crushed it in my hand, the rank stench it gave off had reminded me of the smell of the monkey's cage at the Prospect Park Zoo.

Mr. Geary's call left me pondering a different shade of green. No one in his right mind establishes a brokerage account and keeps a million dollars in the money-market portion of the account. Although I had never owned a brokerage account in my life, as a CPA I knew that people kept most of their investments in stocks and bonds — not in their money-market account. The whole business made no sense. Not unless Uncle Harry had more millions invested in stocks and bonds.

And that couldn't be the case. My two bachelor uncles had made my parents look rich. Uncle Harry and Uncle Joe had lived like paupers in the Mitchell-Lama housing project on Manhattan's Lower East Side. They drove a twenty-year-old Buick that had been rear-ended and looked like a giant accordion. For years, they frequented the deeply discounted dental

clinic at NYU, where interning students treated them. Well into the Reagan administration, they wore suits dating back to the New Deal. Yet they owned a brokerage account with at least a million dollars in it? Could they have made millions selling day-old bread? Were they cheap, crazy, or both?

There was no one to ask. Uncle Harry could no longer tell a knife from a fork, Uncle Joe was dead, Dad was hospitalized, and Mom doled out information as if it were sugar and the world were in a diabetic coma. If I wanted answers, I would have to unearth them myself.

But I knew where to start. Earlier that day, when Mom and I had visited Dad in the hospital, he had asked me to empty Uncle Harry's post-office box.

"Why does Uncle Harry need a post-office box?" I had asked, since it was the first time I had ever heard of my uncles having one. Mom yelled at me not to ask so many questions. Dad said that Uncle Harry got a lot of mail.

Now, sitting on my old bed, I watched Mom, Brillo pad in hand, standing at the kitchen sink with her back to me. Her shoulder-length gray hair slowly swayed as she scrubbed the frying pan she had used to make Uncle Harry lunch. The kitchen had no exhaust fan, and the air was still heavy with the odor of onions from the tuna fish cakes she had deep fried. I asked her for the keys to Uncle Harry's post-office box.

She dried her hands on the white dish towel, neatly folded it, placed it on the counter adjacent to the sink, and led me to the night table next to my dad's side of their double bed. She opened the top drawer. Inside, a plastic Baggie contained Uncle Harry's keys, a black yarmulke, and the Mourner's Kaddish on a laminated card from a funeral home on Flatbush Avenue. Dad had left the bag for me in case he died. I removed only the keys as the pneumatic drilling started again.

Back in the dinette, I sat down on my old bed at the end closest to the window and slid back the faded burlap curtain. On that summer day in 1994, the courtyard was in a shambles. A demolition crew chopped away at the concrete with their drills. Ripped from its supports, the garden fence lay on its side in the dirt next to the felled ailanthus trees — my trees of heaven.

In the place where I used to play and dream and pretend, they were building a parking lot.

Excerpted from Dough: A Memoir by Mort Zachter. Published with the permission of the University of Georgia Press. For more information visit www.ugapress.org. 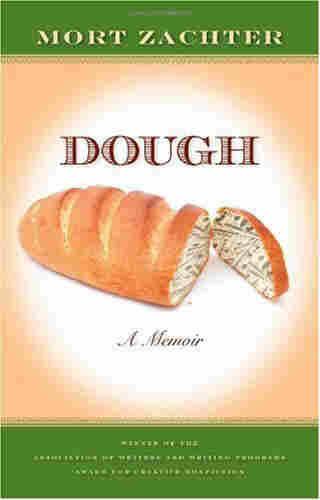