Accessibility links
Explorers Find Thin Ice at the North Pole Every spring there's a brief window for explorers and scientists to try to reach the North Pole. But that window is growing smaller due to a warmer climate. 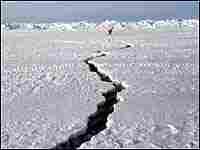 A crack in the ice runway at base camp Borneo. If the runway is closed, nobody can get in or out. Elizabeth Arnold hide caption 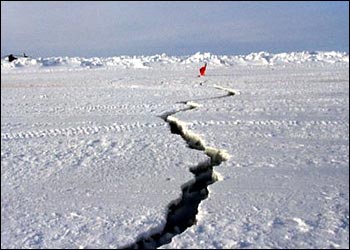 A crack in the ice runway at base camp Borneo. If the runway is closed, nobody can get in or out. 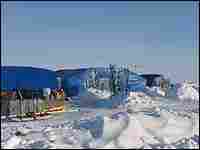 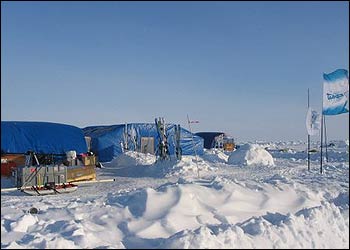 Borneo, a floating ice camp, is 60 miles from the North Pole.

Click through this map from National Geographic to see how climate change is affecting the Arctic, as well as other parts of the planet. 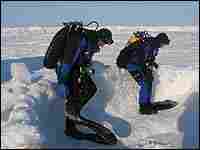 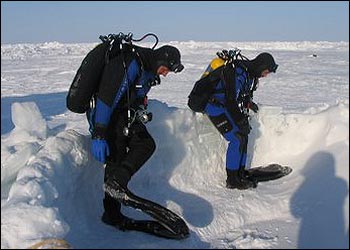 French scientists scuba dive under the ice near the North Pole to gather data. 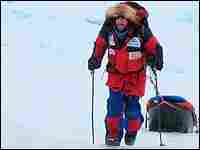 Canadian team leader Richard Weber first went to the North Pole in 1986. He says he is shocked to see how much thinner the ice is now. Elizabeth Arnold hide caption 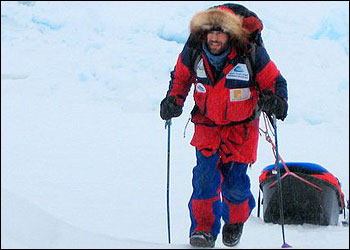 Canadian team leader Richard Weber first went to the North Pole in 1986. He says he is shocked to see how much thinner the ice is now.

For thousands of years, the North Pole — a spot on the drifting pack ice above a mathematical point on the seabed two miles below — has captivated explorers and scientists.

Every spring, when there's enough daylight and before the ice begins to fracture too much, there's a brief window of several weeks for those trying to reach it.

But that window is growing smaller due to a warmer climate. This past season, scientists had to scrap their missions and explorers were forced to abort their expeditions due to severe storms, thinning ice and open water.

Researchers and adventurers alike rely heavily on a floating ice camp near the North Pole. This Russian camp, nicknamed Borneo, is just a cluster of blue tents about 60 miles away from the pole with a few generators for heat and a couple of helicopters.

Dr. James Morison, of the Polar Science Center at the University of Washington, has spent more than 30 seasons in the arctic. This one, he says, is the worst. He's the go-to guy of the polar research community — but even he can't get his work done. His main concern is completing part of a hydrographic survey, observation points that will provide a detailed picture of how seawater and sea ice is circulating.

"Now the survey has been sharply curtailed because of the problems of the break up of the runway and all that kind of thing," Morison says.

A team from the Woods Hole Oceanographic Institution did manage to install what's called an ice mass balance buoy — a device to measure the changes in thickness of sea ice — right near camp. But a few days later, the ice cracked right under the buoy.

Rick Krishfield, one of the Woods Hole researchers, was more resigned than surprised by the news. He's exasperated not only with the weather but by the pace of the research.

"We're opening up a can of worms, everything we look at ends up being more unanswered questions," Krishfield says. "All the results are characterized by models but even the models are so inconclusive."

About a mile away at the other end of the crack there is similar frustration where French scientists have been scuba diving under the ice to gather data. Equipment has failed, spare parts are out of the question and, worse, they are now told they must pack up and leave tomorrow because the runway is cracking up.

The frustration of the scientists pales in comparison with the alarm expressed by polar explorers, those in constant search of adventure and hardship — people who, with only sleds and skis, spend months, sometimes alone, out on the ice and far from the relative comforts of Borneo.

Today, when the weather briefly breaks, some Russians stationed at the camp take the helicopter to assist those who are out there this season. It's a who's who list of legendary explorers.

They re-supply Belgians Dixie Dansercoer and Alain Hubert, who spent the last two months exploring alone, on skis, from Siberia. With one sled a piece, they carefully weigh and pack each bar of food that will hold them for the next two months. They reached the North Pole last night and are now headed to the coast of Greenland, some 2,700 miles total. Both have been to the pole many times, but Hubert says this was different.

"We just thought it's going to be a nice march to the pole, and it was just hell — headwind, strong wind, lots of water everywhere, like we never had before during the whole expedition. So we fought for 13 hours and then we reached the pole, so then we didn't stop," Hubert says.

A few miles but an ocean of ice away, the Russians pick up another team that has also just reached the pole after walking 50 days from Ward Hunt Island, the northernmost tip of Canada's Ellesmere Island.

"I first went to the Pole 21 years ago in 1986 and I remember and this blue line would appear and it would be these huge pressure ridges, ice blocks, big houses," says Richard Weber, a Canadian guide. "And I was shocked the ice is just completely different. It is so much thinner — the character of the ice has changed."

The Russians have one last flight to make this season. They'll drop Norwegian Borge Ousland and his partner, with skis and kayaks, right at the pole — where they will begin to retrace Fridjtof Nansen's historic drift across the Polar Sea to Russia's Franz Josef Land.

Ousland's feats are superhuman. He was the first to reach the Pole totally alone and unsupported. He's since done it in winter, in total darkness, swimming open water and pulling his floating sled. This is a man who seems to fear nothing — except, he says, the warming of the arctic.

"I've seen it myself and I am an eyewitness in that respect. And I'm really worried about climate change and melting of the ice cap and the North Pole might be free of ice in the summer and it's strange. That scares me," Ousland says.