Robin Swicord is the writer and director of the new film The Jane Austen Book Club. She talks about being one of a relatively few female directors in Hollywood — and what it's like to make the transition from screenwriter to director.

What if you could live your life to the themes of "Pride and Prejudice," or "Sense and Sensibility"?

The new film, "The Jane Austen Book Club," takes on that notion from a novel of the same name. The film focuses on a group of California women and their men who examined their own lives through the prism of the novel.

Unidentified Woman #1 (Actor): (As Character) This vase (unintelligible) we picked. A man can do whatever he likes to the woman he loves.

Unidentified Woman #3 (Actor): (As Character) Actually, Emma stops being crazy when she falls for Mr. Knightley. It's the event of the book. Love is an act of sanity.

LYDEN: Writer and director Robin Swicord joins us now from our studios at NPR West.

Robin Swicord, thanks for being with us today.

Ms. ROBIN SWICORD (Director, "The Jane Austen Book Club"): Thanks for inviting me.

LYDEN: I have a question for you. You've been a screenwriter for most of your career. This is your first feature directorial effort, right?

LYDEN: And I know that you adapted "Memoirs of a Geisha." I want to ask you, when you came to this project, what told you that you wanted to do it?

Ms. SWICORD: I wanted to do this film - I would say that the strongest reason is that I love to read the novels of Jane Austen. This film, thematically, I was very interested in because I have been thinking a lot about how fractured our lives are and how difficult it is. We talked about how hard it is to achieve community when people live away from their families, and we commute in our cars and we're isolated and so forth.

But here we are in the middle of a time when we are ostensibly the most connected we've ever been by cell phones and the Internet. And what I felt was that it was a unique opportunity to make a film about how people overcome that. They decide to focus enough to read or reread. They focus enough on each other that they can come to know each other and kind of changed their lives in small ways. And it is the shape of the film as people moving toward community, without really being aware that that's what they're doing.

LYDEN: Did you have any reservation that it would be seen as something entirely feminine and therefore eligible for only a certain market or able to be dismissed?

Ms. SWICORD: I think that anytime a woman makes a movie with a female protagonist, you run the risk of having people call it a chick flick. It's just a way of marginalizing women. But in this particular case, I didn't worry too much about whether it would be labeled one thing or another because I knew that I was making a film that was sort of a date movie in the best sense. We could watch it together and we would forget that the sort of consumer-marketing world likes to divide people off into these niches.

LYDEN: I want to say I really enjoyed this film. I'm a former literature major and I love Austen. This is still, to me, a bold move - to bring people to life who are sympathetic. And it isn't just the women who are sympathetic here. You have an ensemble cast. The men in it are Jimmy Smits and Hugh Dancy. And the men are really a delightful part of this movie.

Unidentified Man #1 (Actor): (As character) It's a novel about novels, don't you think?

Unidentified Man #2 (Actor): (As character) You see, Austen is a young writer questioning herself. Who's a heroine? What makes a good story? Are novels a waste time? Am I going to write? What should I write, you know?

Ms. SWICORD: I love the men in this movie because just as in Austen's novels, the men are holding up one-half of the sky in this film. I think there's a tendency to say, oh, aren't these women great. But the men were such a key part of the film for me.

LYDEN: Which novel were you thinking predominated here? Which of the Jane Austen six?

Ms. SWICORD: Well, I guess the most attention is given within the ensemble to Jocelyn's story. And she sort of begins with "Emma" and passes through Elizabeth Bennet and sort of ends up as Anne Elliot in "Persuasion." So…

LYDEN: Let's me just interject you for clarity's sake. Jocelyn's story - and Jocelyn is played by Maria Bello. She is the most alone. She's lived alone. She raises Rhodesian ridgeback dogs. She isn't - she is actually the most interesting. And she didn't make me think of a lot of Austen's heroines because she's very much, in person, alone, seems to defy convention but is a pretty complex cookie - if you will - underneath.

Ms. SWICORD: That's right. We don't necessarily feel her need at the beginning. She just begins to betray it in small ways.

LYDEN: Let's listen to a little bit of Jocelyn.

Ms. BELLO: (As Jocelyn) Call her. Hard to be alone.

Unidentified Man #3: (As Character) Well, maybe her husband will come back.

Unidentified Man #3: (As Character) Jane Austen, she would write back.

Ms. BELLO: (As Jocelyn) She did. In "Persuasion," Anne Elliot is in love with this guy, Wentworth who's in the Navy, right? But her family thinks that he's not good enough. And he leaves. When he comes back, he's become this wealthy man but he's no longer in love with her.

Unidentified Man #3: (As Character) Okay, that does it. Don't tell me anymore.

Ms. BELLO: (As Jocelyn) I think you're enjoying the Austen, I see.

LYDEN: If Jocelyn is a kind of the strong woman who doesn't need men, you've also got women in here who might be more vulnerable. And I'm thinking of the character played by Emily Blunt, Prudie. And she's tempted by a high school student, which is a pretty explosive notion these days - (unintelligible).

Ms. SWICORD: Oh, yes. From the very beginning, almost no one likes her. And then when she starts getting involved with the student, and it really just begins in conversation with him, and you begin to feel her need and her loneliness and how unparented she is. And she is a little bit lost in herself. She doesn't really know how to be married or even how to be an adult. And I think that we come to know her so that we root for her to do the right thing and not screw up her life. And then we get to see how, through the book "Persuasion," come to some kind of understanding about herself.

Ms. SWICORD: You know, that's a great question. Because when I was working on the script, I was enamored of "Persuasion" because I felt that I was at a time in my life when like Anne Elliot I needed that second chance. I've been trying so hard to break through as director and John Kelly gave me that chance.

In terms of who I identified most with a character I'm really embarrassed to say that the person I felt most like was the most difficult member of the group, which was Prudie. Because she was the little girl that had to write an essay on Julius Caesar and I am (unintelligible). And really if I never - and I was absolutely that kind of bookwormy, geeky, little girl, you know, sitting in the corner, whispering my little stories to myself.

So you know, you're always in your mind make a kind of the sequel of all sequels - where are these people 20 years later? And when I think about Prudie 20 years later, I hope that she has found the balance that I was able to find in my life.

LYDEN: Robin Swicord is the writer and director of "The Jane Austen Book Club." It comes out nationwide October 5th, and she joined us from the studios of NPR West.

Robin Swicord, a real pleasure. Thanks very much for talking with us.

Ms. SWICORD: Thank you so much for inviting me. 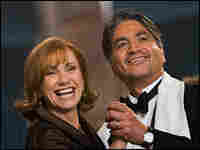 As the film opens, a number of relationships are in the process of collapsing, and the women in them are opting to find solace (and perhaps a little wisdom) in the novels of Jane Austen. Austen wasn't just a romantic, of course, and as they find their own lives reflected in her plots, they ... well, I should probably let you discover what they discover, for yourself.

Suffice it to say that everyone's attractive and articulate, and that Swicord (a writer-turned-director with a specialty in adapting complicated novels (Little Women, Memoirs of a Geisha) for the screen) shepherds them through the complexities here with grace — right through the overly neat, albeit supremely Austen-ish, final reel.