Accessibility links
Mother, Son Share Experiences of War In 2001, Lt. Katherine Flynn Nolan returned to Normandy for the first time since World War II and immediately began having flashbacks. The veteran nurse and her youngest son, who treated troops for combat stress in Afghanistan, recount their shared experiences, decades apart.

Third of a five-part series. 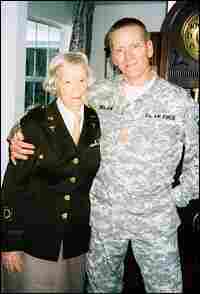 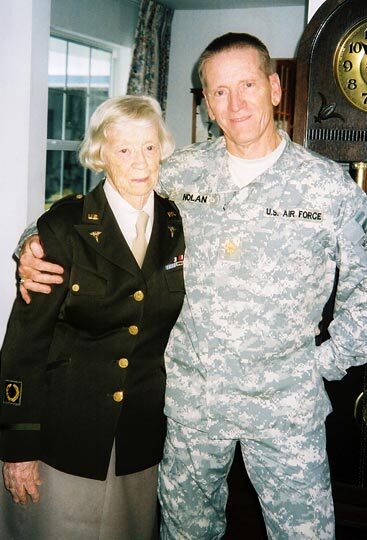 Katherine Nolan stands with her son Maj. Steve Nolan, who surprised her in June by coming home a week early from Afghanistan.

Poems of War and Hope 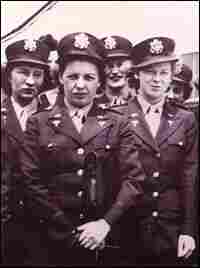 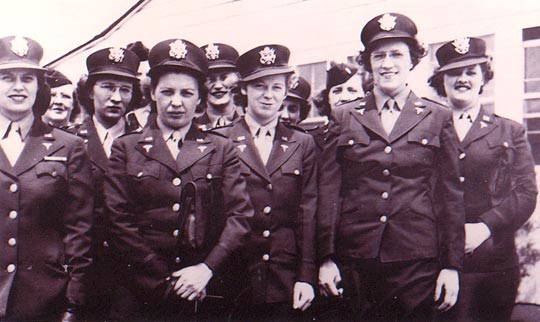 Tales from the 53rd Field Hospital 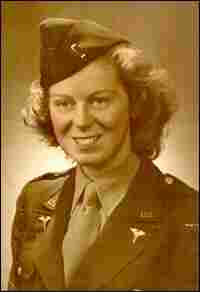 World War II has been explored in countless classrooms, books and movies. So, it seems incredible that, decades later, stories from that war can still surprise us. As Ken Burns' documentary series The War debuts on PBS, NPR explores a handful of stories from World War II that haven't been widely told. 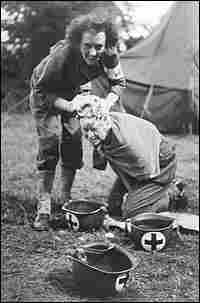 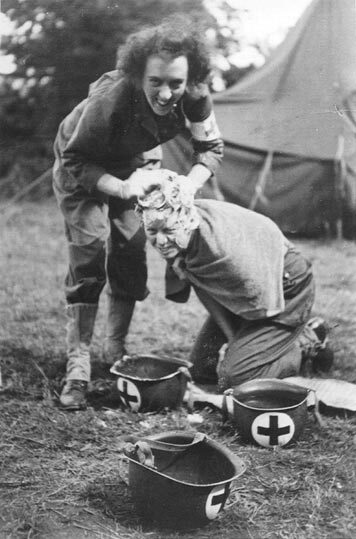 The Legion of Honor

Lt. Katherine Nolan was among 32 World War II veterans who received the Legion of Honor from the French government on the anniversary of D-Day, this past June 6 at a ceremony in Naples, Fla. She was the only woman to receive the honor that day.

The Legion of Honor, France's highest award, has been given since 2004 to U.S. veterans who helped liberate France during World War II. This year's group was the largest to receive the award in one ceremony. 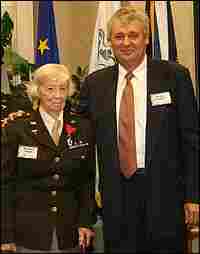 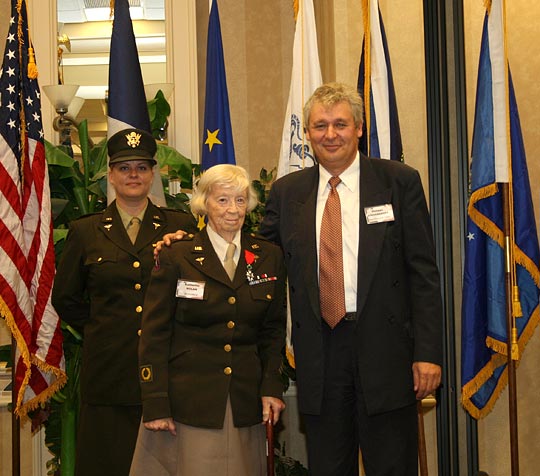 As a young woman, Lt. Katherine Flynn Nolan served as an Army combat nurse during World War II. She nearly drowned while landing in Normandy before going on to tend to the war's wounded in field hospitals across Europe.

In 2001, Nolan returned to Utah Beach for the first time since the war and immediately began having flashbacks and nightmares. She and her youngest son, who served as chief of a combat stress unit in Afghanistan, recount their shared experiences, decades apart.

Twenty-two-year-old Army nurse Lt. Katherine Flynn (later Katherine Nolan) was scheduled to land in Normandy, in a glider, on D-Day, June 6, 1944. But the first gliders crashed, delaying her arrival by a month.

She was part of the 53rd Army Field Hospital that treated the most seriously wounded — from the D-Day invasion through the Battle of the Bulge and beyond.

Katherine Nolan, now 86, remembers, "You have to get to [the wounded] and start treating them for shock and stabilize them within an hour. We had to get them in that golden hour."

The death rate in the field hospitals, which were assembled five miles from the front, was surprisingly low — less than 4 percent.

This past June 6, on the 63rd anniversary of D-Day, 32 veterans of World War II who helped liberate France were presented the French Legion of Honor at a special ceremony in Naples, Fla. Nolan was the only female veteran in the group. She was surrounded by some of her grandchildren and all six of her children, including her youngest son, Maj. Steve Nolan, 55. He surprised his mother by coming home a week early from a tour of duty in eastern Afghanistan, where he served as chief of a combat stress unit.

Steve Nolan treated soldiers in the back rooms of medical aid stations, while witnessing the doctors and nurses at work.

"It's like watching a beehive, the way the teamwork goes," he said. "The skill and the caring [are] really indescribable. I think of my mother all the time."

Steve Nolan's experience gave him a unique insight into his mother's three years of service in World War II.

"I always admired my mother, but I have much more admiration now, because I'm an old fart," he said. "I have a little maturity on me and it's easier to handle trauma and stress, but now I see her as just a kid. That's what I call my soldiers here, a bunch of kids. Of course, they're not, they're young men, but to me they're kids."

Steve Nolan, also a published poet, wrote many poems while in Afghanistan. One is called "Old Farts in a Young War." It ends this way:

All in all they're glad they're young
And think it just a nightmare
To be atop, or God forbid,
Over the proverbial hill

Youth always thinks it has the upper hand
Because they're toned and firm:
And we are, for the most part,
Soft and pudgy.

But it is always an advantage being old,
Because, you see, we already had our chance to be their age
But they will only get to be ours, if they're lucky.

Nolan spoke with his mother a few times from Afghanistan. Once while they were talking, a helicopter landed with wounded soldiers. Steve Nolan mentioned to his mother that one of the wounded was shivering. The former Army nurse immediately replied, "He's in shock. He needs plasma."

"She called the shot first," he said.

Back from his tour of duty and visiting his mother in Naples, just before the Legion of Honor ceremony, Steve Nolan said, "When I was saying goodbye to my mother the thing she said to me was, 'I wish I was going with you.'"

"That's the way I felt, of course ignoring the fact that I'm 86 years old and wouldn't be that much help. But in my mind I was back in my youth, I guess, and thinking I could help," she said.

In 2001, Katherine Nolan returned to Normandy for the first time since World War II. She stood on Utah Beach, where she landed and almost drowned.

"Immediately," she said, "I started having flashbacks after walking on the beach because I was picturing what was going on when I hit that beach. Just everything came back — flashbacks, nightmares. I still don't sleep more than three or four hours a night."

Katherine Nolan was diagnosed with post post-traumatic stress disorder, and has joined a support group. Again, she is the only woman among the veterans from World War II, the Korean War, Vietnam, Iraq and Afghanistan.

Nolan's two older sons — James, Jr., and John Nolan — served in Vietnam. They listened to the speeches given by the veterans who received the Legion of Honor in June.

"Several said they were accepting the honor on behalf of others, fallen comrades," said eldest son, James. "I know exactly what they're talking about. You know you made it back because you were lucky and others weren't. And there's survivor's guilt associated with that."

At the end of the ceremony, Katherine Nolan stood with her new Legion of Honor medal pinned to her old Army jacket. Surrounded by her six children (her husband, James Nolan, was also a World War II veteran; he died two years ago), she said she's thankful that her two sons came back from Vietnam and now her youngest son, Steve, is back from Afghanistan.

"That's pretty good," she said. "This is a very lucky family."

This story was produced by NPR's Cindy Carpien with help from Christine Buckley and Amy Tardif of member station WGCU in Fort Myers, Fla.

Poems of War and Hope