Accessibility links
For Stars, An Impersonal Message Gets 'Personal' Stars' albums toggle back and forth between fizzy pop and dark snapshots of relationships in distress. On "Personal," singers Amy Millan and Torquil Campbell demonstrate that they've mastered the art of he-said/she-said ballads that expose raw nerves and rawer emotions.

For Stars, An Impersonal Message Gets 'Personal'

For Stars, An Impersonal Message Gets 'Personal' 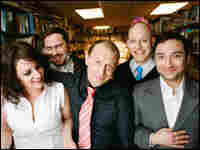 One of many Canadian acts with ties to Broken Social Scene (see also: Metric, Feist, et al), Stars makes records that toggle back and forth between fizzy pop and dark snapshots of relationships in distress. Singers Amy Millan and Torquil Campbell may commandeer their share of hook-laden three-minute singles, but they've also mastered the art of he-said/she-said ballads that expose raw nerves and rawer emotions.

Opening with the text of Campbell's blandly clinical, notably impersonal personals ad ("Wanted: single F / Under 33 / Must enjoy the sun / Must enjoy the sea"), "Personal" unfolds as a revealing exchange between strangers. Millan's nakedly revealing replies tend to say more in six words ("28 and bored / Grieving over loss") than Campbell's anonymous cad says in two verses; her guarded expectations surge to the surface with a similarly powerful economy of phrasing: "Your voice, it sounded kind / I hope that you like me."

The message here, housed in an uncommonly sensitive piano-and-guitar arrangement, isn't as ambiguous as it may seem. For all its innocuous vagueness, Campbell's ad still leads Millan to the same pitfalls that make real-time relationships scary: judgment, insecurity, risk. In "Personal," Campbell and Millan never meet, but they don't have to in order for her hurt to feel real. With punishing efficiency, the song captures the harshest downside of the personals, examining the way they can distill relationships down to Cliffs Notes that let users skip directly from anxiety and doubt to rejection and despair.