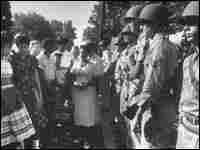 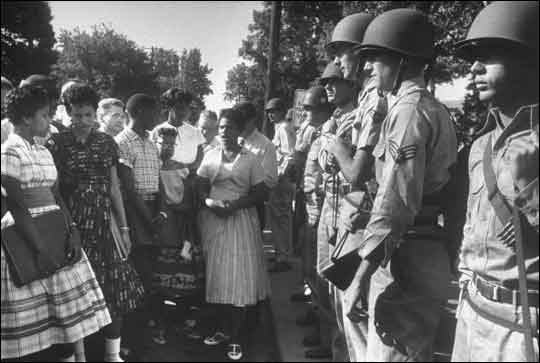 Fifteen-year-old Minnijean Brown (center) and other members of the Little Rock Nine are blocked by the Arkansas National Guard from entering Central High School. 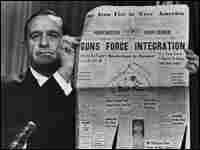 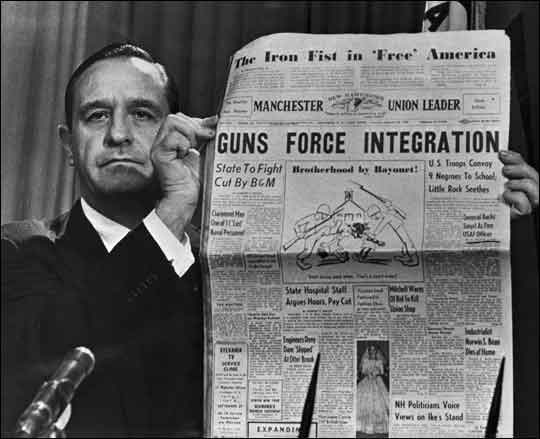 Arkansas Gov. Orval Faubus displays the front page of the Manchester, N.H. Union Leader to illustrate what "northern papers" are saying about President Eisenhower's use of federal troops to enforce integration in Little Rock. He charged the president with using unprecedented "police state methods."

Fifty years ago this month, Little Rock began to desegregate its public schools. Nine black students were assigned to attend the city's Central High. But when the school opened right after Labor Day, white segregationists gathered in a mob. Gov. Orval Faubus defied a federal judge and called in the National Guard to keep the black students out.

The mob won that first day; the mob and the governor, who sensed their power and passion.

The NAACP kept the nine students home for three weeks out of fear for their safety.

A court ordered Faubus to withdraw the Guard, and he did. The Little Rock Nine returned to school on Sept. 23. Outside the building, local police tried to control at least a thousand angry segregationists. When they threatened to storm the school, the police got the children out a back door.

The mob beat several black journalists, one a World War II combat veteran. The pictures were broadcast on television.

That night, the president of the United States, Dwight Eisenhower, took control.

"An extreme situation has been created in Little Rock," he said. "This challenge must be met, and with such measures as will preserve to the people as a whole their lawfully protected rights."

He ordered units from the 101st Airborne Division to Little Rock. They were there by dawn on Sept. 24, 1957. The next day, soldiers escorted the nine students through the front door and into their classrooms.

There was no real trouble on that day. But more was coming.

"It's a very strong strain in southern thought to be independent, and to act independently and not to be forced, especially not by the Yankee enforcer," says Betsy Jacoway, an independent scholar and author of a recent book about the crisis, Turn Away Thy Son.

Jacoway was a child in Little Rock then, not yet in high school. Her uncle was the school superintendent, who had a "go-very-slow" integration plan. President Eisenhower's decision to send troops actually worked for Gov. Faubus, she says. It pushed the issue beyond race, and actually revived painful old memories. Many whites were reminded of the years after the Civil War.

"We hadn't had troops in the streets here since 1865," Jacoway says, "and that was so horrifying to us that we thought 'Well, Faubus is the only leader we have right now, so maybe we should follow him.'"

So why did Faubus prevent the black students from attending Central High? The governor died more than a dozen years ago, but to the end, he denied charges of political opportunism. He had ordered the National Guard around Central High for one reason, he said: to keep the peace.

"I do not mean and had no intention of challenging the federal union," Faubus said later. "But the maintenance of the peace and order of a community is paramount to other considerations. And I found it necessary in order to preserve the peace and order in the community, and to protect the lives, even of the negro students and the negro people, to take the actions which I did."

"Faubus wanted to be governor for life, bless his heart," said Jim Johnson. Johnson ran for governor as an ardent segregationist in 1956 — and lost to the far more moderate Faubus. But, he said, Gov. Faubus soon began to see civil rights stirring an ever angrier white reaction — and a kind of opportunity. In an interview, Johnson said the mob at the school was there after the governor called and asked him to make trouble.

"It was an orchestrated show," he said. Faubus "got the word out to all of us to get our friends to come out. If the people were assembled, he didn't have any doubt that he could get a 'rah rah' going. That would appear to be a mob, to the point that it could cause damage."

In the turmoil that followed, Faubus would lead white resistance to integration — in Arkansas and the South. It made him governor three more times. And he rewarded his main segregationist ally, Jim Johnson, by helping him to a seat on the Arkansas Supreme Court.

Now retired from the court, Justice Johnson has changed his views very little, if at all, in 50 years. For "integration", he still prefers the term "forced race mixing." It conjures up undertones.

And that finally explains so much of what happened, according to historian Betsy Jacoway. Whites feared exactly that desegregation would lead to race mixing, she said. "And it's so fascinating, because when I talk to Southerners about this, they say, 'duh!'"

"When I talk to anybody else about this, they say, 'You've got to be kidding. Really, is that what this is about?' she said. "But yes. Southern concerns and ... I think, largely American concerns, about integration stemmed from sexual fears, fears of black male aggressiveness and potency."

With the Army's help, the nine black students did start classes that fall. For awhile, things seemed to settle down a little, and the story fell off newspaper front pages across the country. But in Little Rock, anger and fear lingered, and so did the crisis — personally and painfully for those who were there.

"You're being hit and kicked, so our legs were always bruised," remembered Minnijean Brown Trickey, one of the nine black students.

"Stepping on heels is particularly horrible," she continued, "because it's something that only you know is happening. Spit I didn't like at all. It makes me nauseous thinking about it."

The crisis continued to grow. Gov. Faubus wasn't done with history and he knew it. A few years later, he was asked, "What if you had just stood aside and let those kids into the school?"

"Well, I might have survived to the end of my term," the governor answered, "but that would have been the last you would have heard of me."