Accessibility links
The Quest to Design the Perfect Yawn : Krulwich Wonders... What would it take to design a yawn so powerful that it would make everyone who saw it yawn back? Would it have to be a big yawn? And a dog can make a person yawn, but what about the other way around? Robert Krulwich investigated these questions.

Listen
The Quest to Design the Perfect Yawn 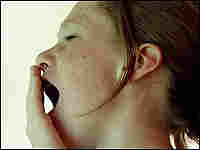 Yawning is contagious, but how contagious is it? What would it take to design a yawn so powerful that it would make everyone who saw it yawn back? iStockphoto.com hide caption 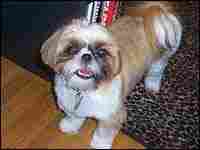 This dog, Cosby, lives with two humans who agreed to yawn directly and repeatedly into his face, hoping he'd yawn back. The result? (Well, we hope you listen to it as it actually happened.) He did yawn. Over and over. We aren't making any big claims for this experiment -- he's just one dog -- but we'd like to know whether you can make your animal friends pick up on your yawn. Win Rosenfeld, NPR hide caption

The professor of psychology at the University of Maryland remembered the famous Monty Python sketch about a joke so funny that it killed anyone who heard it; The British, naturally, wanted to use it against the Germans, and the Germans vice versa, and both sides furiously pushed to develop the first "Doomsday Joke."

Professor Provine decided to do the same thing, but not with a joke. He proposed a Doomsday Yawn.

Provine, who has spent 20 years studying laughter and is the author of a well-respected book about why we laugh, is an expert on contagious behaviors. He decided (since he has tenure, and why not?) to try to design a yawn so powerful that it would make everyone who saw it yawn back. That was his goal: the 100 percent contagious yawn.

A number of studies (including his own) found that a medley of ordinary yawns on video played to a classroom for five minutes would induce a responsive yawn in 55 percent of the audience. So that was Provine's starting point: Could he design a yawn powerful enough to move from a 55 percent response right up to Total Yawn-ness?

Our story (just push on the icon up above and cover your mouth) describes what happened next.

Provine figured there had to be a particular trigger, a "sort of ultimate yawn stimulus, the supra-normal stimulus," that would increase the response rate.

At first, he thought it had to do with the gaping mouth. But when he widened the gape, played with its duration, size, shape and sound, nothing changed. He got no extra yawns.

So he focused on the mouth alone and erased the details of faces, featuring mouths only. The response rate dropped. The gape, apparently, was not the trigger.

Next, he concentrated on stretching. Yawns and stretches have a long association. In 1923, British scientist Sir Francis Walshe observed people who were paralyzed on one side of their bodies, who couldn't move a muscle intentionally, yet when they yawned, during the yawn, they could move on their paralyzed side! There is something primal about yawning and stretching, and when you listen to our story you will learn about yawning fetuses, yawning vertebrates and how it is impossible to complete a yawn without stretching.

However, a bigger stretch produced no change in the audience.

The rate stayed at 55 percent and, even more embarrassing, when Provine simply had people read about yawning, with nothing to look at, no visual stimulus, they yawned at roughly the usual rate.

In the end, Provine could not build his Doomsday Yawn. He couldn't even build a Better-Than-Average Yawn. And if you listen, you'll hear him explain why he failed, and you'll hear his theories on why we yawn in the first place. At the very end of the story, we surprise him yet again.

Can a Person Make a Cat, Dog, Horse Yawn?

It is well accepted that people can catch yawns from other mammals. Cat owners and dog owners routinely pick up yawns from their pets. But, we asked, can a person make a dog yawn?

Provine wasn't sure. He was, in fact, doubtful.

We don't offer our experiment as scientific proof. One example is never, ever enough, but for the fun of it, we asked two humans to yawn right into the face of this little dog here, Cosby.

If you can, if you have a dog, cat, horse or goldfish, please try this at home and tell us what happens. We'd be very, very interested.

Robert Provine described the early part of his quest for the perfect yawn in "Yawning," published in the November-December 2005 issue of American Scientist, Magazine of Sigma Xi.