Accessibility links
Ornette Coleman on Sound Innovations As the master of free jazz, Ornette Coleman's career spans more than five decades. Over that time, he has created a musical world of his own. He talks to Farai Chideya about his unique perspective on the beauty of sound.

As the master of free jazz, Ornette Coleman's career spans more than five decades. Over that time, he has created a musical world of his own. He talks to Farai Chideya about his unique perspective on the beauty of sound. 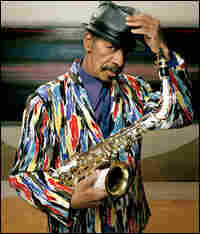 In 1957, Ornette Coleman seemed to burst on the New York jazz scene. He arrived from the West Coast with a plastic saxophone and a style that caused a firestorm of debate.

CHIDEYA: This song, "Lonely Woman," is now considered a Coleman masterpiece, but in the late '50s, it frightened some and angered others. A lot of jazz fans wondered how Coleman maintained his cohesion, creativity and soul while breaking the basic laws of jazz. What's clear today is that Ornette Coleman has his own thing. He's the father of a musical language that he calls harmolodics.

Mr. ORNETTE COLEMAN (Jazz Saxophonist; Composer): It's the scientific form of sound based upon the human emotion of expression that's basically what it is and what it does.

CHIDEYA: When you talk to Ornette, you quickly realize that he's in his own space but it's worked for him. He's won the prestigious Macarthur Genius Grant and this year, he was awarded the Pulitzer Prize for music and a Grammy Lifetime Achievement Award.

Here's my conversation with Ornette Coleman.

Mr. COLEMAN: I'm very grateful to have this honor to speak to you about something that we all carry about which has to do with sound.

CHIDEYA: You know, you have just had such an amazing year. What did you think when you first heard about both of those awards?

Mr. COLEMAN: I was thinking about how I do I make better music.

CHIDEYA: So you're not sprung on the titles?

Mr. COLEMAN: No. No. I think the music is the only idea that it represents the quality of what it does.

Mr. COLEMAN: Just being human. I'm not doing anything anyone else doesn't do, but I happen to be a composer of music and I'm very dedicated to perfecting that. And for a few years now, I've been getting closer to actually perfecting it, and today is a good opportunity to speak about it.

CHIDEYA: So you feel as if you are hitting your stride?

Mr. COLEMAN: Well, I don't know if I'm hitting it, but I know I'm not missing it.

CHIDEYA: Let's talk a little bit about where you came from. So 50 years ago, you arrived in New York, you've turned the jazz world on its head with songs like "Lonely Woman" and "Congeniality," and people started paying attention to what you were doing, but it wasn't always positive. What kind of reactions did you have to people who praised you but also to those who criticized you?

Mr. COLEMAN: Well, I happen to be (unintelligible) and it has all kinds of qualities I deal with human emotion like hillbilly music, blues, country and western, classical, oh, I grew up in all those kinds of environments. So when I was old enough to ask my mother to - if I could buy (unintelligible), and she said, I could if I make the money. So I went and started shining shoes, better yet, smelling feet and I only had to take my money home and give it to her and one day, she told me to look under the bed and there was the horn and I picked it up and played it.

Mr. COLEMAN: And to thing about it, I don't if I'm good, but I played it almost as good as I'm playing now.

CHIDEYA: How do you start a song? Walk me through your creative process.

Mr. COLEMAN: Well, I think, the first thing is just acknowledging the human genome. Like imagine all the people at - on earth and I call human. Get up and express something that they are feeling good about or something that they're thinking about, and it's usually done in the form of sound, which ends up being what we call music.

CHIDEYA: You use the word human a lot, what does it mean to you specifically?

Mr. COLEMAN: Well, for one thing is my mama. She was human. And she was really something else. I mean, when I play with my mother, she used to tell me, Junior, I know who you are, so I didn't have to worry about my mother (unintelligible).

CHIDEYA: Did you have to take a leap of faith and say, it doesn't matter that no one's doing what I'm doing, I'm going to have to do it myself?

Mr. COLEMAN: Oh, I never really thought about neither one. I just thought everybody else would like or dislike something and it wouldn't be a matter of what race, what song, what notes. Every skill is not based upon intelligence. And music is not so - something that you have to prove that you know. But you have to prove two things: Are you familiar with sound, and can you make sound with not running everybody out of the room? The blues, they'll use the same sound that the guys dressed in a tuxedo and you could be naked. It's still the same sound. The sound doesn't require the intelligence of art. It requires the resolution of emotion.

CHIDEYA: Do you think or hope that your audiences have the same emotions that they do when they're listening as you do when you're playing?

Mr. COLEMAN: I'm glad you're asking me that question because usually, they do it while I'm playing and then after I'm finish.

CHIDEYA: Well, Mr. Coleman, thank you so much for spending some time with us.

CHIDEYA: The one and only Ornette Coleman. He'll be doing a rare performance this week at Royce Hall at the University of Southern California, Los Angeles.