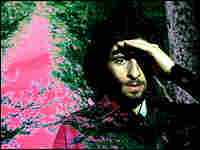 For a guy singing about an infatuation that "makes you hate and kill for," Jose Gonzalez sounds pretty composed on "Killing for Love." Perhaps it has something to do with half of his family background: Born to Argentinean and Swedish parents, Gonzalez sings and plays his acoustic guitar in a soothing, unruffled manner that brings to mind South American bossa nova legend Antonio Carlos Jobim. (The Swedish pop of ABBA or Roxette is missing entirely, but a hint of the British folk icon Bert Jansch comes through in Gonzalez's phrasing and musicianship.)

"Killing for Love" begins the way many songs on Gonzalez's second album, In Our Nature, start: with the intimate sound of his fingers caressing guitar strings. It doesn't seem like a song about a "heart on fire" that's "bursting with desire" (at least he didn't rhyme "moon" and "June"), but as the song chugs along, something quietly powerful begins to happen. Gonzalez's voice never rises above a clear-eyed tone, but his buzzy finger-picking and Erik Bodin's thwacking conga drum combine to form a hypnotic, driven pulse. In the process, the music becomes unrelenting and single-minded — just like, for instance, a romantic obsession.