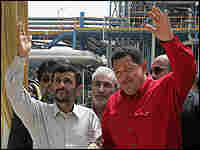 The small part of New York that belongs to the United Nations normally coexists with the United States comfortably. But occasionally the two clash, as is the case with the controversial visit of Iranian President Mahmoud Ahmadinejad this week.

The State Department, likely, would not normally issue a visa to the combative Iranian leader. But under a 1946 "headquarters agreement," the United States is obliged to issue visas to world leaders and others on official U.N. business.

And as a result, a parade of American adversaries have indeed descended on New York over the years — Cuba's Fidel Castro, the U.S.S.R.'s Nikita Khrushchev, Venezuela's Hugo Chavez and, now, Ahmadinejad among them.

"You've had leaders who have incited passion and indignation among the American public and yet we haven't closed the door," says Jeffrey Laurenti, a senior fellow at The Century Foundation. "If you're going to be a host of a world organ, these leaders have to be afforded access."

On balance, says Laurenti, the United States gains more from hosting the United Nations than it loses. And, he says, there is always the chance of an unexpected diplomatic breakthrough when enemies come calling. Given the angry rhetoric surrounding Ahmadinejad's current visit, it seems unlikely to happen in this case.

Many of America's adversaries have used the platform that a U.N. visit affords to take pot shots at American presidents, from Harry Truman to Bill Clinton to George W. Bush. In a 1960 speech before the U.N. General Assembly, Castro unleashed a long diatribe in which he insulted two future presidents. He called John F. Kennedy a "millionaire, illiterate and ignorant." Richard Nixon, he said, "lacked political brains."

More recently, Chavez opened his 2005 speech before the General Assembly with these inflammatory words, in reference to President Bush: "Yesterday the devil came here. Right here. And it smells of sulfur still today. Yesterday, ladies and gentlemen, from this rostrum, the president of the United States, the gentleman to whom I refer as the devil, came here, talking as if he owned the world. Truly. As the owner of the world."

The United State has, on occasion, barred low-level diplomats on United Nations business from entering New York on grounds that they posed a threat to national security. This was the rationale given when, in 1988, President Ronald Reagan made the controversial decision to bar Palestinian Liberation Organization Chairman Yasser Arafat from New York, even though he had been invited by the United Nations to speak before the General Assembly.

When Reagan refused to reverse that decision, the entire General Assembly flew to Geneva to hear the Palestinian leader speak.