Accessibility links
Artists of Battlefield Deception: Soldiers of the 23rd The soldiers of the secret 23rd Special Forces played a unique role in World War II: to deceive the enemy and draw their attention away from real combat troops. The unit was made up of artists, designers, architects and sound engineers.

Listen
Artists of Battlefield Deception: Soldiers of the 23rd

Last of a five-part series. 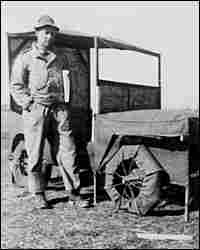 In 1943, Ellsworth Kelly, a member of the top-secret 23rd Special Troops, stands with a prototype of a fake jeep, made of burlap and wood. Later, it would be made of rubber — and used to fool German troops on the battlefields of World War II. Kelly, now a well-known abstract expressionist painter, was one of more than 1,000 men who joined the 23rd. Courtesy Ellsworth Kelly hide caption 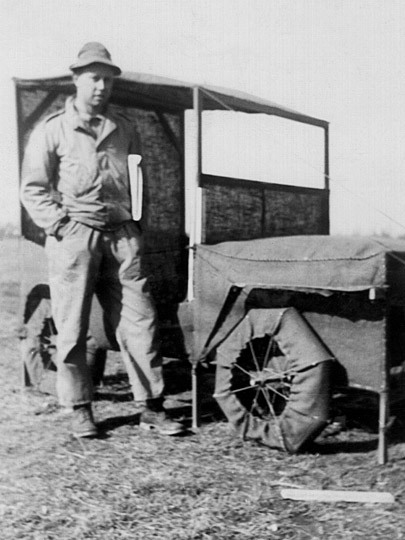 In 1943, Ellsworth Kelly, a member of the top-secret 23rd Special Troops, stands with a prototype of a fake jeep, made of burlap and wood. Later, it would be made of rubber — and used to fool German troops on the battlefields of World War II. Kelly, now a well-known abstract expressionist painter, was one of more than 1,000 men who joined the 23rd. 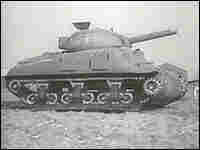 This is an example of the inflatable tanks used by soldiers of the 23rd. Courtesy Roy Eichhorn, U.S. Army Management Staff College hide caption 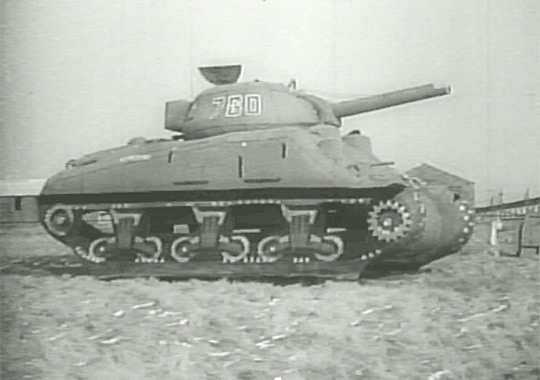 This is an example of the inflatable tanks used by soldiers of the 23rd. 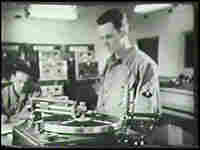 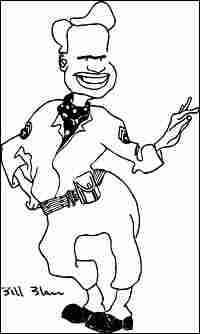 Fashion designer Bill Blass was another member of the 23rd. His colleague Jack Masey, who was just 18 when he joined the Army, drew this caricature. Jack Masey hide caption 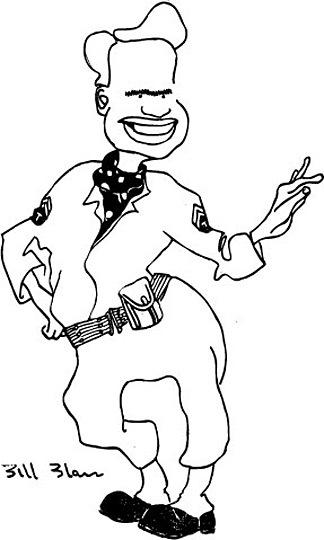 Fashion designer Bill Blass was another member of the 23rd. His colleague Jack Masey, who was just 18 when he joined the Army, drew this caricature.

The art of deception has been part of warfare since its beginnings. There is no more famous example than the Trojan Horse.

But few people know much about the deceptive role the U.S. Army's 23rd Special Troops played in World War II.

That's because their work was kept secret until 1996. The mission of the 23rd — made up largely of artists, designers, architects and sound engineers — was to deceive the enemy by drawing their attention away from real combat troops.

Their weapons? Inflatable jeeps and tanks, acting, sound recordings and plenty of imagination.

Recruits to a 'Rubber Army'

More than a thousand troops were recruited into this top-secret, phantom army, some of whom came right out of art school. Fashion designer Bill Blass was one of them, as was photographer Art Kane and a number of now well-known artists, including abstract expressionist Ellsworth Kelly.

Kelly heard about the 23rd while he was still an art student and decided he wanted to be part of the subterfuge unit. When he joined, work was already underway on developing fake artillery and vehicles.

He recalls a jeep that was first made as a prototype with burlap and wood. Later, it was made of rubber and looked like the real thing.

Eventually, members of the unit were shipped overseas. Jack Masey was 18 years old when he was drafted into the 23rd after graduating from New York's High School of Music and Art. Masey says it wasn't until he landed in England that he really understood what they would be doing.

"We were told we were going to be using inflatable equipment to try and fool the Germans into thinking that we were a real army, when we were in effect, I suppose, a rubber army," Masey recalls.

Members of the 23rd were sent to France in 1944 in the weeks after D-Day. Under cover of night, they would inflate their rubber tanks, jeeps and weapons, hoping to convince the German army that there were more troops in certain areas than was actually the case.

But fake equipment was only one of the ways the troops of the 23rd deceived the enemy: Sonic deception, consisting of an elaborate system of fake recordings, was another key weapon.

Jonathan Gawne, author of Ghosts of the ETO, says the troops mounted huge speakers onto trucks to project the sound of the recordings — such as troop or tank movement or the construction of a bridge.

At night, they would move the speakers into place, and at certain prescribed times, they would play their programs so that the Germans would hear what the Americans wanted them to hear, Gawne explains.

The troops of the 23rd were also chameleons, often changing the insignias on their uniforms and vehicles, pretending to be members of other units and companies. Gawne says they were trying to outfox German informers.

"Some of them were actually German soldiers that were hiding in barns, some of them were French that were working for the Germans. And they would radio reports back of what was going on in the area," Gawne says.

Masey says the special troops would act as decoys. They would go to various towns and were told to "be seen, mill around, go to pubs, have a good time, pick up girls, enjoy."

The 23rd Special Troops took part in 21 operations during World War II, with mixed results. Sometimes their efforts seemed to have little effect.

But author Gawne says they are credited with one major success: Operation Viersen near the end of the war, when the Americans were crossing the Rhine.

"They simulated the 30th and 79th Infantry Divisions and made it appear as though those divisions were training for a river crossing, were moving up supplies for a river crossing in one area, while the actual two divisions were moving secretly to the north and crossed in the north. And the general commanding the 9th Army, Gen. [William] Simpson, said that he felt that that deception may well have saved 10,000 men," Gawne says.

For Some, Secrecy Continued After the War

When the war ended, veterans of the 23rd were told they had to keep their war experiences secret. Not all of them did.

Some told their family and friends about them. Ellsworth Kelly did not. Neither did Roy Eichhorn's stepfather, George Martin.

Eichhorn, the director of research and development at the Army Management Staff College at Fort Belvoir, outside Washington, says he knew Martin was an Army engineer, but he never really understood what his stepfather did.

Gradually, he learned that Martin was a photographer who documented the work of the 23rd. Eichhorn became fascinated with the special troops and started researching them. The Army, he says, has much to learn from the 23rd.

"How do you lead people that are that creative in what we think of as this incredibly stovepipe, stodgy organization? How does the Army make use of talent?" Eichhorn says. "How do you harness it and then guide it without trying to regiment it?"

The veterans of the 23rd are now free to talk about their experiences, though many are no longer alive. But now, at least, their families understand what it was they did during the war, and why they were so secret about it.

The audio version of this story notes that after the war, the soldiers of the 23rd were told to keep their experiences secret. In fact, some were told and some were not. Jack Masey, who is quoted in this report, was not told. 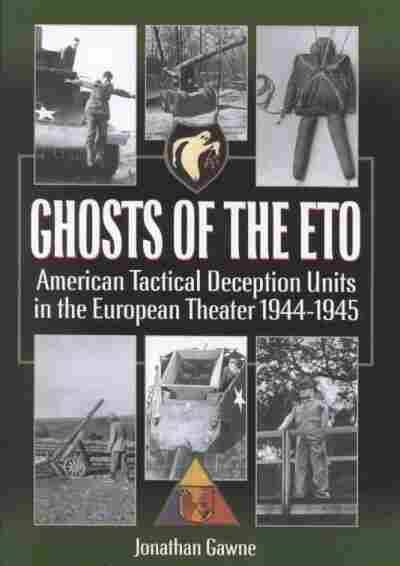 Ghosts of the Eto