Accessibility links
New Republic: Caught Between The Pill And The Hill The Obama administration mandate to provide free access to birth control through private insurance plans has divided Catholics. Tara McGuinness of The New Republic notes that the administration is striving to improve access to care while Bishops focus notions of religious liberty. 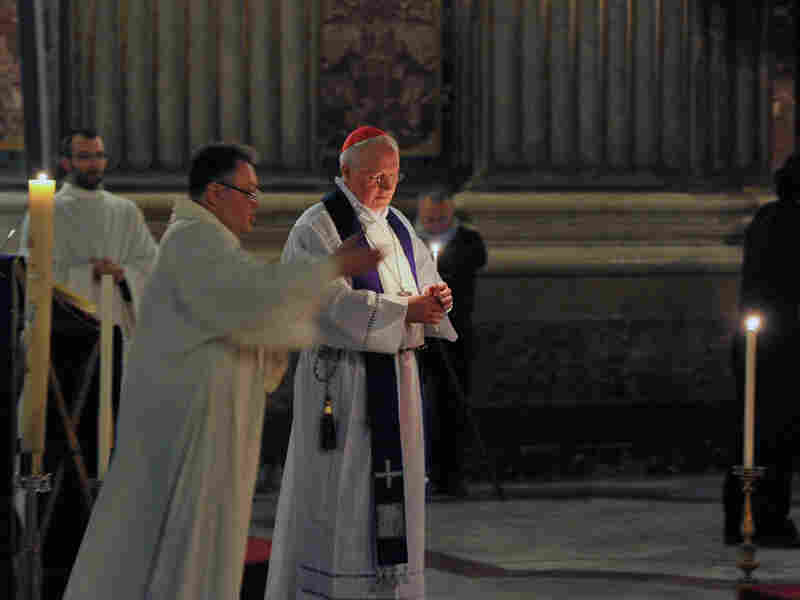 A photo from the "Penitential Vigil" Mass in the St. Ignatius Church in Rome during a "Towards Healing and Renewal," symposium for Catholic bishops on Feb. 7, 2012. The Catholic Church in the U.S. is fighting the Obama Administration mandate on birth control. Andreas Solaro/AFP/Getty Images hide caption 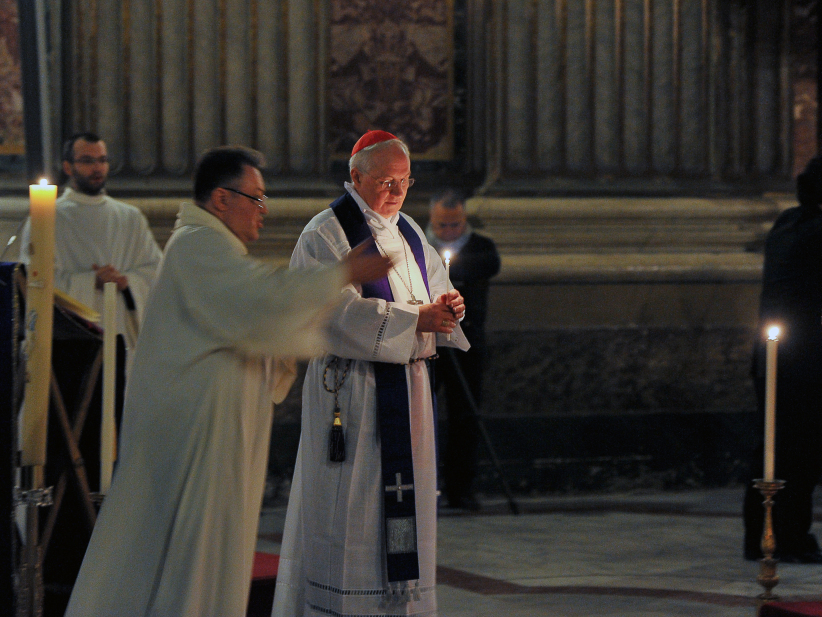 A photo from the "Penitential Vigil" Mass in the St. Ignatius Church in Rome during a "Towards Healing and Renewal," symposium for Catholic bishops on Feb. 7, 2012. The Catholic Church in the U.S. is fighting the Obama Administration mandate on birth control.

Read Another Opinion On The Contraception Mandate

On Friday the White House reached a compromise on the contraception mandate that can satisfy both reproductive health advocates and Catholic hospitals. For those like Rick Santorum, though, who have been loudly and repeatedly accusing the Obama administration of engaging in "overt hostility to faith in America," this isn't enough. But if this is really a war against religion, maybe it's time to ask the people of faith who are supposedly under attack. People like me.

My expertise on this topic is personal. Mine is a family in which priests and nuns outweigh any other profession except nurses. My mom taught nursing and medicine at a Catholic college, and placed nursing students in Catholic hospitals for 40 years. Family, faith, and taking care of people — these values are at the core of what we were taught growing up. Perhaps that is why the harsh tones, the imaginary division of the world into two camps — the faithful under attack and the attackers — seems more politics than theology. Certainly it is extremely distant from the millions of lives that could be affected by these conservative outcries. This would merely be entertaining election year political shenanigans if there were not so many lives at stake. More than 11 million women use birth control; millions more will have access to it under the new law.

Yes, there is a religious freedom question at stake, not only for employers but also employees. But much of this is already settled territory. The wide use of contraception long ago opened up the complex nature of religion in the public square and already found resolution, well before these election year political attacks. The new Department of Health and Human Services rule comes years after advances in 28 states, where regulations similar to the HHS rule have prompted religious leaders and policy makers to create solutions that serve women and their families and faith-based organizations. Take, for example, DePaul University, the nation's largest Catholic college, which has confirmed that its employee benefits include prescription birth control coverage. DePaul is not alone — the Archdiocese of New York provided contraceptive coverage for medical reasons even prior to a state law mandating it, as did Marquette University in Madison, Wisconsin, where the Diocese itself now provides coverage under Wisconsin law.

I agree with the Bishops that there are cases when the religious freedom of an employer trumps that of an employee. For example, when I was a secretary at the Sacred Heart Rectory, I wouldn't expect my health care plan to include prescription contraception because I worked for the church. Under Obama's regulation, religious institutions, like the church I grew up in, are exempt. Synagogues and other houses of worship do not have to provide contraception. Period.

But when Notre Dame is the single largest employer in South Bend, Indiana, with Saint Joseph Regional Medical Center not far behind, how could we say, "Sorry, you should move if you want to have affordable access to these health services." It is discordant with my Catholic and my American values that a receptionist at the local hospital making around $26,000 a year should have to shell out nearly $600 for birth control or cede control to her employer over when to start a family, when she is already paying in to her health care plan. The new agreement would take this difficult question off the table by allowing the women and men working at these religious affiliated organizations to receive the equal and affordable access through their insurers directly without engaging their employers.

It is about time we raise the policy debate in Washington to keep up with complexity of faith, health and family that most Americans already navigate in their daily lives. Most Americans are religious. Fifty-five percent told Gallup that religion is "very important" to them. But these same Americans are also focused on the health of their families and they are, in fact, using birth control. Newt, Mitt, Rick, and all the other gentlemen trying to demagogue this issue would be best served listening to the folks in the pews before launching any more pious screeds. Most of America's faithful families aren't under attack from a "war on religion." I for one don't feel under attack — except perhaps from a small group of Republican presidential candidates who keep ignoring the voices, values, and lives of women like me.