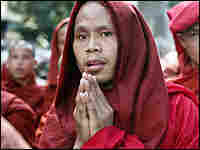 Buddhist monks march down a street in Yangon, Myanmar, on Tuesday despite warnings from the government. AFP/Getty Images hide caption 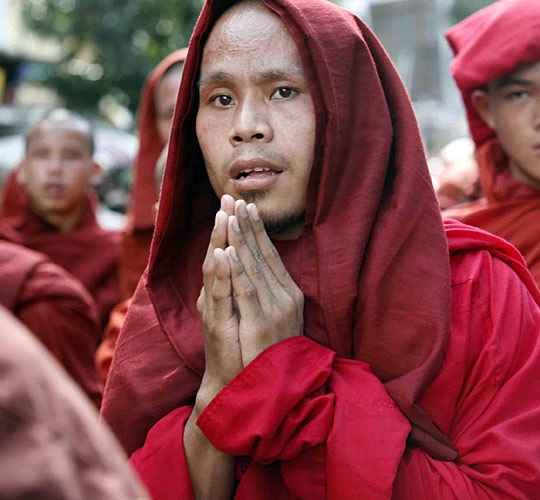 Buddhist monks march down a street in Yangon, Myanmar, on Tuesday despite warnings from the government. 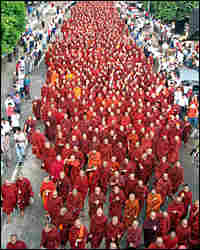 Buddhist monks march on a street in protest against the military government in Yangon, Myanmar, on Monday. AP/Mizzima news hide caption

Tens of thousands of Buddhist monks in Myanmar marched in defiance of the military junta's order to discontinue anti-government demonstrations, conducting an eighth day of mass protests in the country's two largest cities.

Cheered on by supporters and shadowed by pro-junta supporters in pickup trucks, the monks marched peacefully Tuesday from the soaring Shwedagon Pagoda in the capital Yangon as about 700 others staged a similar show of defiance in the country's second-largest city of Mandalay.

The protests, which have reached 100,000 in recent days, have built to a scale and level of fervor not seen since a 1988 uprising when the military regime fired on peaceful crowds and launched a crackdown that killed thousands in Myanmar, formerly known as Burma.

Following Monday's demonstrations, led by a phalanx of barefoot monks, the U.S. said it was poised to impose additional sanctions against Myanmar's military rulers.

President Bush was to announce the sanctions against key members of the junta and those who provide them financial aid in a Tuesday speech at the U.N. General Assembly, the White House said.

The U.S. already restricts imports and exports and financial transactions with Myanmar. Washington also has imposed an arms embargo on Myanmar.

So far, Myanmar's junta has been handling the monks gingerly, wary of raising the ire of ordinary citizens in this devout, predominantly Buddhist nation.

But diplomats said troops have been discreetly deployed in downtown Yangon and could easily be called in against the protesters. Some schools in Yangon, the country's largest city, were closed.

Joining the monks Tuesday were members of the pro-democracy National League for Democracy headed by Aung San Suu Kyi as well as university students. They marched from Shwedagon to the Sule Pagoda in central Yangon - a distance of more than a mile - under a scorching sun.

Some party members carried flags of the fighting peacock, a symbol of the democracy movement, while students held a banner saying "Nonviolence, peaceful expression" in Burmese.

Following Monday's march, authorities in cars cruised Yangon's streets Tuesday, announcing that the clergy have been directed not to take part in "secular affairs" and saying that certain elements were trying to instigate unrest in the country.

Warnings also were sent out against all illegal gatherings in a country where an assembly of more than five can amount to breaking the law.

The government's New Light of Myanmar newspaper quoted Religious Affairs Minister Brig. Gen. Thura Myint Maung as saying that protests by monks also had spread to cities like Mandalay, Hinthada and Monywa in seven of the country's 14 states and divisions.

The demonstrations have escalated in just one week from a marginalized movement to mass protests drawing not only the monks but people from all walks of life.

In Mandalay, ordinary people were starting to join the monks or follow them on foot, motorcycles, bicycles and trishaws, though many still appeared too afraid to show their open support.

"I support the monks. However, if I join them, the government will arrest me," said a man selling belts at a Mandalay market. He declined to give his name, fearing reprisals from officials.

The head of the country's official Buddhist organization, or Sangha, issued a directive Monday ordering monks to stick to just learning and propagating the faith, saying young monks were being "compelled by a group of destructive elements within and without to break the law."

The current protests began Aug. 19 after the government sharply raised fuel prices in what is one of Asia's poorest countries. But they are based in deep-rooted dissatisfaction with the repressive military government that has ruled the country in one form or another since 1962.