Accessibility links
Anbar Alliance May Not Translate to Other Provinces U.S. officials trumpet the success of their alliance with Sunni tribes in Anbar as a model, but attempts at reconciliation in nearby Diyala Province have been thwarted by insurgent attacks and an ethnic divide that does not exist in Anbar.

Listen
Anbar Alliance May Not Translate to Other Provinces 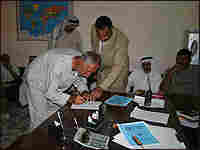 Mayor Najem Harbi shows a tribal sheik from Muqtadiya where to sign a contract in which the sheik agrees to renounce violence and work with the Iraqi government and U.S. military forces. Jamie Tarabay, NPR hide caption

As U.S. officials trumpet the success of their new alliance with Sunni tribes in the western Iraqi province of Anbar, they suggest it could serve as a model for other tribal regions in the country.

But attempts by the U.S. military to promote reconciliation in nearby Diyala Province have been thwarted by insurgent attacks and an ethnic divide that does not exist in Anbar.

Muqtadiya is one of the largest towns of Diyala Province, which lies northeast of Baghdad. The mayor of the town, Najem Harbi, presides over a meeting of tribal leaders, Iraqi security officials and U.S. soldiers — a meeting during which the tribal leaders are expected to sign a contract to promise to stop all kidnappings, murders, turf wars and attacks on other tribes.

They must also agree to pass on information and tips to Iraqi security forces or U.S. troops and pledge to solve all problems through dialogue.

After heated discussions that last several hours, the mayor is able to declare some success. He calls one sheik after another to come to his desk and sign the piece of paper.

"Not all the sheiks came, only those whose areas have been cleared by the Americans," he says. "But now we need to provide them with basic services, water and security."

Diyala Province, lush with vegetation and palm groves, has always been known as the breadbasket of Iraq. It has more natural resources than the largely desert province of Anbar, and it is home to a greater ethnic and tribal mix.

There are at least 23 major tribes, and more than 100 sub-tribes, all with competing interests. Recently, in Baqouba, the provincial capital, most of the tribal leaders agreed to enter an alliance and stop fighting each other. But that process, encouraged by the U.S. military, has also been fraught with problems.

On Monday, a suicide bomber killed at least 25 people attending a meeting of Sunni and Shiite sheiks in Baqouba.

Muqtadiya, less than half an hour away, is still in the throes of sectarian war.

Not far from the mayor's office, Lt. Col. Keith Gogas, commander of the 6-9 Armored Reconnaissance Squadron, from the 1st Cavalry Division, sits inside a tank and studies a map of Muqtadiya.

It is dotted with different colored push-pins. Some denote suspected roadside bombs, others locate checkpoints, and likely hideouts for the militants of al-Qaida in Iraq. Beside the map, scrawled on a white board, are different military operations and the names of neighborhoods that have been partially cleared.

Adding to the complexity is the months-long U.S. troop surge. Sending more troops into the streets of Baghdad and Anbar Province pushed insurgents out of those areas and into Diyala Province. It slowed down efforts by U.S. forces to stabilize this area.

Col. David Sutherland, commander of U.S. forces in Diyala Province, has been making the rounds in Muqtadiya, checking on progress in the latest set of operations.

Capt. Kevin Bradley, a troop commander, reports soldiers in his area are taking a census of all the households and are trying to get a local water treatment plant running again.

U.S. commanders, such as Bradley, have to work both the military and political angles, reaching out to locals while trying to subdue gunmen. He tells Sutherland that a man claiming to represent Ansar al-Sunna, a group allied with al-Qaida, wants to meet with him.

"Until we actually talk to someone who holds sway or can actually explain what their group consists of and how they're different from al-Qaida and how they want to be part of the government process, then I'm really skeptical about it, to be honest," he says.

Bradley says insurgent groups started approaching the U.S. military a couple of months ago to try and forge the same sort of alliance that Sunni fighters in Baghdad and Anbar have made.

Cutting a deal with Anbar's tribal population was made easier by the fact that the province is mostly Sunni, mostly from the same tribal confederation and fighting the same enemy.

Muqtadiya's ethnic landscape also continues to shift. Once mixed between Sunnis and Shiites, the sort of displacement and fighting that has dominated Baghdad's streets is now playing out here.

"All the Shias will have been displaced and moved out as the battle line moves farther to the south," Bradley says.

Muqtadiya remains a deadly place for U.S. troops. In the past two weeks, eight soldiers have been killed in roadside bomb attacks.

After months in Baghdad without losing a soldier, a Stryker unit suffered its first casualties upon arrival in Diyala. Despite that fact, U.S. troops have been training Iraqi security forces there for the past six months.

Mayor Najem Harbi says the situation is as bad now as it was then.

"There's been no change. If the Americans were to withdraw now, we wouldn't know what to do because, right now, the gunmen are stronger than the Iraqi army or the Iraqi police," he says.

The mayor adds that he has yet to receive a single dinar from either the central or provincial governments.

He relies on the U.S. military for everything — from securing his city to paying for every piece of equipment in the mayor's office, including the pen and notebook that sit on his desk.

He also depends upon the U.S. military to subdue Muqtadiya's neighborhoods and engage community leaders, so he can bring them to his office to sign more reconciliation agreements.