Accessibility links
The Caterpillar with an Appetite for Philosophy A caterpillar, guided by the wisdom of Aristotle, William Blake and Ludwig Wittgenstein, speaks volumes about the human condition, writes author Marina Lewycka.

Listen
The Caterpillar with an Appetite for Philosophy 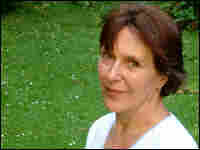 Marina Lewycka is the best-selling author of A Short History of Tractors in Ukrainian and the newly published Strawberry Fields. She was born in a refugee camp in Germany at the end of World War II and grew up in England. Her cat and goldfish have died, but she still lives with her husband in Sheffield, Yorkshire. Sonia Lewycka hide caption

Listen to Lewycka discuss her first novel, A Short History of Tractors in Ukrainian.

"He started to look for some food." Images Courtesy of Eric Carle Studios hide caption 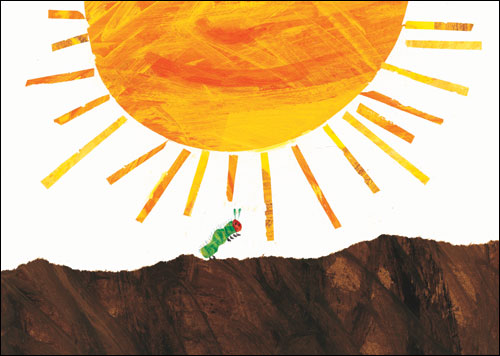 "He started to look for some food."

"On Thursday he ate through four strawberries, but he was still hungry." hide caption 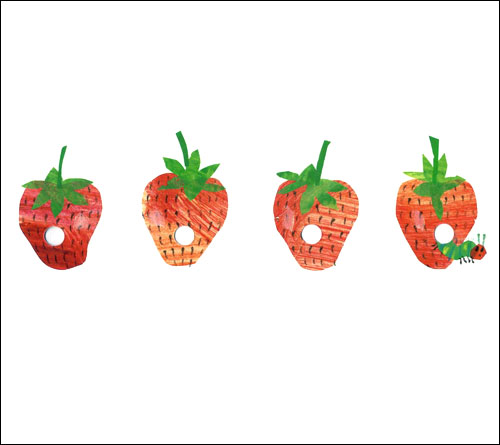 "On Thursday he ate through four strawberries, but he was still hungry."

"Now he wasn't hungry any more — and he wasn't a little caterpillar any more. He was a big, fat caterpillar." hide caption 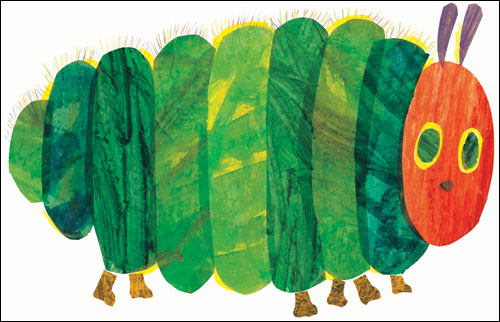 "Now he wasn't hungry any more — and he wasn't a little caterpillar any more. He was a big, fat caterpillar."

You really must read The Very Hungry Caterpillar by Eric Carle, first published in 1969. It's not just a children's classic, it's a human classic — which is strange, because it has no humans in it at all. It's about a big green caterpillar.

The story is simple: the caterpillar is born, eats too much — far too much — learns to eat less, has a snooze, and changes into a butterfly.

But of course, there's far more to it than that. Carle's Hungry Caterpillar is an iconic figure whose journey from egg to butterfly is a metaphor for human development and progress, offering profound insights into the human condition.

As a thinker, he is second only to that great Greek philosopher, Aristotle, who first proposed that rational thought advances through thesis and antithesis — in other words, you eat a lot, and then you feel awful, so you stop eating. What could be more rational than that?

In fact it was also Aristotle who taught us that "moderation in everything" was the secret of happiness, so he may well have been watching an ancient ancestor of Carle's Hungry Caterpillar nibbling his way delicately through a nice classical Greek green leaf.

We will only find happiness, said Aristotle, if we can find the middle path between excess and deficiency. Isn't there a lesson for us all in that, in these times of hyper-consumption that are threatening the very existence of our planet? The Hungry Caterpillar knew when to stop — do we?

But there's something puzzling about this book. All those things the Hungry Caterpillar ate — the sausage, the cupcake, the salami, the Swiss cheese — where did he find them? Surely those are not suitable food for caterpillars. Did someone leave them lying around, or did he go looking for them? It makes me wonder whether it was not Aristotle at all, but the visionary poet, thinker and mystical proto-hippie William Blake, who was the real voice of the Hungry Caterpillar. Blake takes the opposite line from Aristotle — "the road of excess leads to the palace of wisdom." Without all that excessive eating, the caterpillar would never have been ready to pupate, and move on to the next stage, the beautiful butterfly stage.

Then again, I've always thought there was a touch of Ludwig Wittgenstein about the Hungry Caterpillar. He was the founder of modern linguistic philosophy, famous for the statement, "Whereof one cannot speak, thereof one must be silent." Well, the caterpillar doesn't say a lot, does he?

Oh, forget all that. The real reason this is a great book is because of the little round wormholes in the pages. Even if your own fingers are now too big to be able to fit through the wormholes, you can have huge pleasure reading this book with a young person with caterpillar-sized fingers and a butterfly-colored imagination. 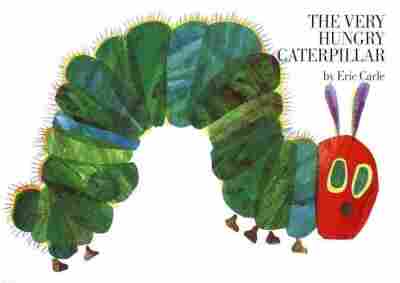