Japan's newly confirmed Prime Minister Yasuo Fukada has quickly made it clear that his ruling Liberal Democratic Party is facing a crisis of public trust unprecedented in more than a half century in power.

As expected, Fukuda won confirmation comfortably in the lower house of Parliament, which the LDP controls; however, the upper house, chose opposition leader Ichiro.

In such case, Japan's constitution defers to the lower house, but the outcome suggests Fukuda will have a tough time getting legislation through the split Parliament.

Fukuda restated his determination to restore public trust in the LDP, shaken by a series of scandals and policy blunders during the short tenure of former Prime Minister Shinzo Abe. Fukuda acknowledged to reporters that he has no room for mistakes.

"I would say that I named my new Cabinet as if I were fighting with my back to the wall," he said. "If I make even one mistake, the LDP could be lost. We must remain vigilant."

"If the LDP runs into difficulty getting legislation passed, we may need to ask the people again which party they support," he said.

Ueno was among the LDP legislators who lost his seat in July. He said one reason for the LDP's defeat was dissatisfaction with the economic reforms begun under Abe's predecessor, Junichiro Koizumi.

"The reforms had a good effect on the whole … but … there were some side effects," he said. "So we may need to slow down or adjust our reforms."

Fukuda's first move in office was to name a new Cabinet, composed largely of LDP faction bosses and ministers from Abe's administration.

After Abe's blunders, many Japanese were relieved that an experienced and capable prime minister is now at the helm. However, a return to the LDP's habitual back-room dealing and factional haggling can hardly be comforting. 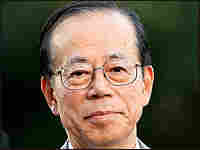 The moderate Fukuda beat out Taro Aso, a conservative former foreign minister, to head the Liberal Democratic Party — which paved the way for his subsequent election by parliament as head of state.

The leader promised to rebuild public trust in his party, which is struggling to maintain its decades-long lock on power.

Fukada is seen as a caretaker by many. But he will have challenges ahead, including a budget deficit and an upper pariliment run by the opposition party.

The 71-year-old Fukuda is the longest serving chief cabinet secretary in Japan's history. That post includes the role of chief government spokesman, and Fukuda is known as an extremely careful speaker.

LDP faction bosses said they chose him to head the party because of his experience and steady hand. But others say that the faction bosses backed Fukuda in exchange for guarantees of key government positions for themselves or their faction members.

Fukuda was initially in the running to succeed former Prime Minister Junichiro Koizumi, under whom he served, but then yielded to Shinzo Abe. He is a member of the LDP's Machimura faction, as was Shinzo Abe and Junichiro Koizumi.

Fukuda is a political blueblood, the eldest son of former Prime Minister Takeo Fukuda. After graduating from Waseda University, he worked for an oil company for 17 years, and came to politics surprisingly late in his career at age 41. He was elected to the Japanese House of Representatives representing central Japan's Gunma prefecture.

Fukuda is known as a moderate on foreign policy issues. He has publicly pledged not to visit the controversial Yasukuni Shrine, which houses the remains of World War II war criminals. He has warned against unnecessarily irking China with the shrine visits and criticized Koizumi's annual trips to the temple.