Accessibility links
Myanmar Junta Cracks Down on Monks' Protest Security forces fired warning shots and tear gas canisters while hauling Buddhist monks away in trucks as they tried to stop anti-government demonstrations in defiance of a ban on assembly. About 300 monks and activists were arrested across Yangon.

Security forces fired warning shots and tear gas canisters while hauling Buddhist monks away in trucks as they tried to stop anti-government demonstrations in defiance of a ban on assembly. About 300 monks and activists were arrested across Yangon.

Myanmar has begun cracking down on protests against the government, protests led by thousands of Buddhist monks. Reports are now coming out of that closed country that some protesters have been killed, possibly including monks. Earlier reports told of monks being beaten, loaded onto trucks, and hauled away. Today, thousands defied the government ban on public assembly and marched toward a pagoda in the center of the country's main city Yangon.

We go now to NPR's Michael Sullivan, who has spent the last several days in Myanmar, the Southeast Asian country, which formerly was known as Burma.

And, Michael, this is clearly a challenge to the military government that's ruled Myanmar with an iron hand for decades, and yet these huge demonstrations have been going on now for days.

MICHAEL SULLIVAN: Yeah. And I think it's really caught the government off-guard, and I think that's one of the reasons why they may have taken so long to respond to this thing. Either they were just surprised by the outpouring of support by ordinary citizens for these monks or maybe the military was just trying to infiltrate the monks to find out who the leaders of this movement were, so they could arrest those leaders and put an end to the thing. Or maybe they were just deciding to let these things play themselves out, hoping that these people would take to the streets for a couple of days and then, you know, it will just go away and, of course, that hasn't happened.

MONTAGNE: Put this in perspective for those of us who, you know, Myanmar is a country that is not much spoken of or heard from. What did the monks want there?

SULLIVAN: Well, this whole thing started about a month ago after the government raised fuel prices. They basically doubled the price of fuel and that made people angry because it made everything else more expensive in Myanmar. There were protests in the streets that were led by opposition leaders and pro-democracy activists, and of course, those people were immediately arrested. And then the monks took up the torch and I think, you know, again, this surprised the government because they pretty much thought that once they went after the pro-democracy people and threw a bunch of them in jail that would be it. It tends to work in Myanmar because the military is so good at violently suppressing these people that if you just round up a few hundred, that pretty much puts an end to things.

Nothing like this has ever happened since 1988. 1988 was the last time that the people actually got out in large numbers in the streets and, of course, that had a really, really bad ending for the people. An estimated 3,000 died when security forces open fire on these people. So people who are marching - the monks and their supporters - you know, they're excited but they're keeping this in the back of their minds that the military could, at any point, start shooting again.

MONTAGNE: And in the several days that you spent in Myanmar, what did you see?

SULLIVAN: I saw an amazingly poor country. I mean, the country has so many natural resources and it has a tremendous amount of natural gas that I couldn't figure out why these people live so poorly. And, obviously, the answer is it's the regime.

It's very hard to get people to talk to you in Myanmar because people are so afraid of that regime. Spies are everywhere. Ordinary people in Myanmar will not talk to you in the presence of another person because they think that person might be a spy. So this gives you a little idea of just how, omnipresent, the security apparatus is there and why the military has been able to stay on as long as they have.

MONTAGNE: And any question of a repeat of 1988?

SULLIVAN: I think it's wide open at this point. I mean, it's going to be a long fight. I mean, clearly, the early rounds have gone to the protesters, to the monks and to their supporters. And yesterday in Yangon, just the looks on the faces of the people as the monks and their supporters went by, the looks on the faces on the onlookers. I mean, people were very, very excited, but they are also terribly apprehensive because they know that history. They know what could happen. It's going to be a long fight. I think the government effectively counterpunched today. I mean, we did see protesters on the streets but not in the numbers that we've seen them in the last couple of days. So the security forces are clearly trying to get a handle on this thing and I think it's still early days.

MONTAGNE: NPR's Michael Sullivan who's just left Myanmar. He spoke to us this morning from Bangkok, Thailand. 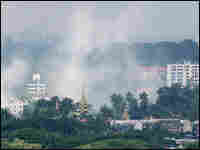 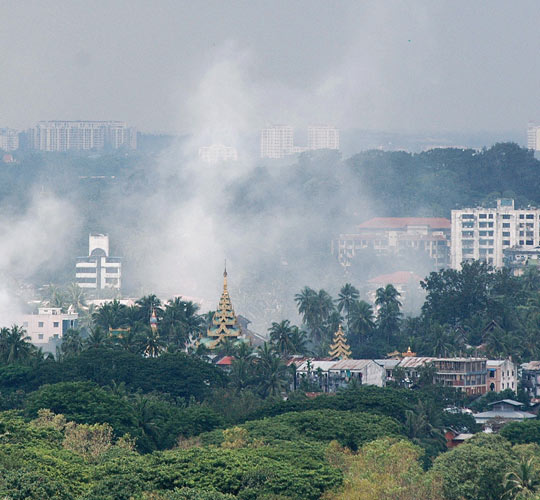 Smoke from tear gas rises over Yadeshe Road in downtown Yangon on Wednesday, as Myanmar police crackdown on protesting monks. 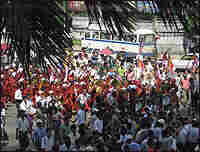 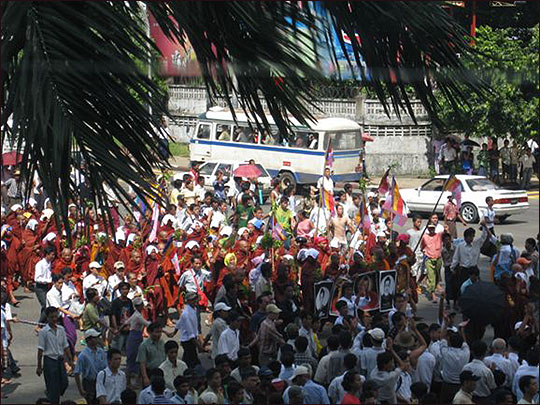 Tens of thousands of people pour into the streets in protest Tuesday.

Riot police in Myanmar shot and killed at least one anti-government activist and wounded three others as security forces launched a crackdown on protests, beating and arresting dozens of Buddhist monks and dissidents, the government said.

Dissident groups said up to eight people had been killed.

In an announcement on state radio and television, the country's military government acknowledged the use of force. The report said security forces had opened fire after a crowd of 10,000 people, including what it described as "so-called monks," who failed to disperse at Yangon's Sule Pagoda. It said police used minimum force.

The dead man, age 30, was hit by a bullet, the statement said. It also said two men, aged 25 and 27, and a 47-year-old woman suffered wounds when police fired, but did not specify their injuries.

The situation has alarmed the international community. The United States and the European Union condemned the attacks and called on the military rulers to open a dialogue with pro-democracy leaders, including detained opposition leader Aung San Suu Kyi, according to a joint statement on the sidelines of the U.N. General Assembly.

Myanmar's junta had banned public gatherings of more than five people and imposed a nighttime curfew following days of marches led by the monks — the largest such gatherings since a bloody crackdown in 1988, when security forces fired into peaceful demonstrations, killing thousands of people.

Others speaking out against the crackdown included the Dalai Lama and South Africa's Archbishop Desmond Tutu, both Nobel Peace Prize laureates like Suu Kyi.

The EU also threatened to strengthen existing sanctions against the regime if it uses violence to put down the demonstrations.

On Wednesday, about 5,000 monks and 5,000 students along with members of Suu Kyi's National League for Democracy set off from Shwedagon to the Sule Pagoda in the heart of Myanmar's largest city, but were blocked by military trucks along the route.

Other protesters at the Sule Pagoda were confronted by warning shots.

Some carried flags emblazoned with the fighting peacock, a symbol of the democracy movement in Myanmar. The march proceeded quietly with protesters praying rather than chanting.

About 100 monks stayed behind at the eastern gate of the Shwedagon Pagoda, refusing to obey orders to disperse after riot police failed to dislodge them despite employing tear gas, batons and warning shots.

A branch of the National League for Democracy exiled in Thailand said the arrests in Yangon numbered 300, most of them in a western suburb of the city. The number could not be independently confirmed.

In Myanmar's second largest city of Mandalay, more than 100 soldiers armed with assault rifles deployed around the Mahamuni Paya Pagoda.

"We are so afraid; the soldiers are ready to fire on civilians at any time," a man near the pagoda told The Associated Press, asking that his name not be used.

The protests could bring increased scrutiny on China's close relations with Myanmar. China is the country's major trading partner and Chinese energy companies are investing in exploration of natural gas in Myanmar.

The current protests began Aug. 19 after the government hiked fuel prices in one of Asia's poorest countries. But they are based in deep-rooted dissatisfaction with the repressive military rule that has gripped the country since 1962.