Accessibility links
Iran's Ahmadinejad Defends Nuclear Program In a speech to the U.N., Iranian President Mahmoud Ahmadinejad defends his country's right to "a peaceful" nuclear program. He calls the U.S. a bullying, arrogant power that is misusing the Security Council. 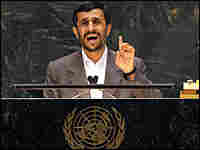 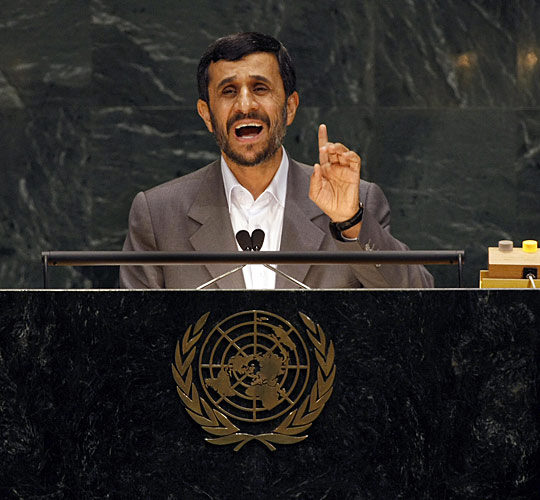 Iran's president has captured most of the headlines at the United Nations General Assembly by defending his country's right to what he calls a peaceful nuclear program.

Tuesday night, he used his speech to blast the United States, calling it a bullying, arrogant power that is misusing the Security Council.

U.S. and European diplomats are pushing for tougher sanctions to stop what they believe is a secret nuclear weapons program.

French President Nicolas Sarkozy took a tough position on Iran during his first speech before the U.N. General Assembly. He made it clear the stakes are high.

When Mahmoud Ahmadinejad took the podium, he tried to paint the U.S. and other Security Council members as the real threat. And though he did not mention the U.S. by name, it was clear what country he meant.

"How can the incompetent who can't manage themselves rule humanity and arrange its affairs?" he asked.

Ahmadinejad told the General Assembly that Iran's nuclear activities are peaceful and transparent, and he rejected what he described as illegal U.N. Security Council sanctions. He said Iran is resisting and thinks this political issue is now closed because his country is cooperating with the International Atomic Energy Agency.

"Iran decided to pursue the issue through its appropriate legal path — one that runs through the IAEA — and to disregard unlawful and political impositions of the arrogant powers," he said.

Iran has agreed to answer the IAEA's questions about its past nuclear activities. The U.S. and European diplomats describe that as a first step, but they still insist that Iran suspend uranium enrichment and related activities.

Diplomats are trying to persuade Russia and China to go along with a third sanctions resolution. German Chancellor Angela Merkel told the General Assembly that diplomats need to stay united, and she called for harsher sanctions.

"Iran is ignoring U.N. Security Council resolutions," she said. "Iran is blatantly threatening Israel. Let's not fool ourselves. If Iran would acquire the nuclear bomb, the consequences would be disastrous."

The nuclear issue was not the only one surrounding Ahmadinejad's trip to New York. He faced a tough crowd at a news conference Tuesday, refusing to speak to a woman who said she is married to one of the Israeli soldiers kidnapped by Iranian-backed Hezbollah militants in Lebanon more than a year ago.

Asked later to clarify his position on Israel, the Iranian leader said, "We believe the Zionist regime is a usurpative, illegal occupational entity regime."

He also said Palestinians should determine the region's future. 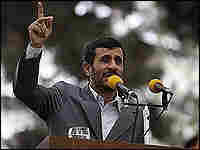 Mahmoud Ahmadinejad has drawn widespread protests during his appearances in the United States — where he has been vilified for questioning the Holocaust, denying the right of Israel to exist and refusing to suspend a nuclear program that could be used to produce nuclear weapons.

But condemnation from the United States and other nations may be just what the Iranian president needs to shore up a shaky political position at home.

Although he provides a focal point for U.S. opposition to Iran, some experts argue that Ahmadinejad is less popular and less powerful in his own country than he appears and many of his views, though strange and repellent to people in the West, are not much out of the mainstream of thought in Muslim countries. Pronouncements that elicit derision in the Unites States may resonate with the nationalists and poorer classes that make up Ahmadinejad's political base in Iran.

For instance, the view that the Holocaust either did not happen — or that it has been blown out of proportion — is not uncommon in Islamic countries. Many Islamic countries, including U.S. allies such as Saudi Arabia and Pakistan, do not recognize Israel. Ahmadinejad has been quoted as saying that Israel should be "wiped off the map," but some scholars say he was mistranslated while quoting the late Ayatollah Khomeini, who actually said "the regime that occupies Jerusalem should vanish from the pages of history."

In his appearance at Columbia University, Ahmadinejad provoked incredulous laughter with the statement that his country has no homosexuals; gay culture is forced deeply underground in most Islamic countries, which punish homosexual activity harshly. Ahmadinejad asserted that women in Iran are more respected than men, a commonplace argument among Muslim men who say that restrictions on political expression, dress and freedom of movement protect a woman's honor, dignity and privacy. He flatly denied that his government suppresses freedom of speech or imprisons political dissidents, although international human rights groups have documented numerous instances of both practices, not only in Iran but among U.S. allies such as Egypt and Saudi Arabia.

Although Ahmadinejad is often the face of Iran's foreign policy, he doesn't have the ultimate power to set it. Under the constitution, that power belongs to Iran's Supreme Leader, Ayatollah Ali Khamenei, who is also commander of the country's armed forces. Both foreign and domestic policy decisions must also be reviewed by the Islamic clerics of Iran's Guardian Council, which has authority to veto government decisions it deems un-Islamic.

Professor Stephen Zunes of the University of San Francisco says that Ahmadinejad is seen as a loose cannon by many of those clerics, and that's reflected in some recent reversals for the president and his allies. A conservative military commander who opposes Ahmadinejad's more radical faction was appointed to head the elite Revolutionary Guard. Ahmadinejad's rival, Ali Akbar Hashemi Rafsanjani was elected head of Iran's powerful Assembly of Experts. And the president's slate of candidates lost heavily in municipal elections. Zunes adds that there's another sign Ahmadinejad is losing favor: some Iranian intellectuals have criticized the president's Holocaust denials, something they wouldn't dare to do without at least tacit sanction from the ruling clerics.

Ahmadinejad handily defeated Rafsanjani for president in the summer of 2005, casting himself as a man of the people and Rafsanjani as a wealthy elitist. He promised to fight corruption and use Iran's oil wealth to help the poor.

The 51-year-old president has his roots in Iran's working class. He is a blacksmith's son, whose high scores on entrance exams won him a place at one of the country's top universities. He served in a paramilitary engineering battalion during part of the Iran-Iraq War, and later returned to the university for a PhD in transportation engineering.

Ahmadinejad was politically active as a student during the 1979 Iranian Revolution, but he denies allegations that he was one of the students who took and held hostages from the U.S. Embassy in Tehran. Some former hostages have identified Ahmadinejad as one of their captors, but former students who are known to have taken part in the hostage crisis have said he was not among them. CNN quoted U.S. government officials as saying that a CIA investigation concluded that Ahmadinejad's involvement in the hostage crisis was not proven.

Ahmadinejad worked his way up through a variety of appointed government administrative posts, including governor-general of Ardabil Province. In 2003, the Tehran city council elected him mayor of Iran's capital city, where he made a name for himself by rolling back the reforms of some his predecessors. He sided with religious conservatives on such issues as requiring separate elevators for men and women. As president, he later alienated some of those same conservatives by saying women should be allowed to attend sporting events in national stadiums.

As president, Ahmadinejad did set up some programs to help the poor, including a fund to help young people meet the expenses of marrying and setting up households. But he lost popular support when he was unable to contain soaring prices for food and housing.

Even Ahmadinejad's anti-Western rhetoric may have backfired among Iranian nationalists. Some of his former backers have said he is spending too much time on foreign policy controversies and not enough on domestic concerns.

Ahmadinejad would be eligible for another term beginning in 2009, but he hasn't said whether he will run.