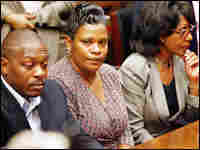 The parents of Mychal Bell, one of the "Jena Six," meet with congressional leadership on Capitol Hill in Washington. Getty Images hide caption

I'm Michel Martin, and this is TELL ME MORE from NPR News.

Later in the program, we'll talk about the upcoming fall television season. And we'll talk with my old friend and colleague, newsman Ted Koppel. He just won a lifetime achievement award.

But first, we want to continue our coverage of events in Jena, Louisiana. That's the town that's been at the center of a civil rights battle. Last week, thousands of marchers there protested the treatment of six black teenagers who have been charged in an assault on a white student. Protesters feel that whites who've been involved in racial incidents there have been treated far more leniently. The fight has now moved to Capitol Hill. In a moment, we'll talk with the chairperson of the Congressional Black Caucus.

But first, we want to hear about what's been going on in Jena since the march. We turn to Howard Witt. He is the southwest bureau chief for the Chicago Tribune. He's been covering this story from the beginning.

MARTIN: Lots of development since the protest last week. I wanted to start with the case of Mychal Bell. He's the only one of the Jena Six to be tried in the case. His conviction for assaulting Justin Barker, the white student, was overturned. The appeals court is saying he shouldn't have been tried as an adult, but he remains in an adult jail. Why is that?

Mr. WITT: Well, he's still jailed because the judge who has jurisdiction over the case - who's the one who heard the original case - has decided that he should not be free. He's now in juvenile court, and the judge - that same judge in this small town hears all the cases, so he sits in juvenile court as well as the adult court. He has declined to release him. He's not - the judge has not giving any reasons, and because it's now on juvenile court, everything's sealed and no one's officially allowed to talk about it.

But because he's still has a juvenile charge hanging over his head, a conspiracy charge in relation to this attack on the white student, the judge has declined to release him.

MARTIN: Is there a juvenile court date? Is there a bail re-hearing? What's the next step?

Mr. WITT: Well, two things can happen. First of all, the local district attorney, who originally prosecuted him, has the option to re-file the other charges of these - some kind of assault charges against him. He can re-file the charges as an adult if he does - if he picks a particular kind of charge, he could file again as an adult or he can pursue the case in juvenile court. In addition, the D.A. has said he's going to appeal the decision of the appeals court, reversing the conviction. So that's still up in the air. In addition, the - his defense - Bell's defense attorneys are very likely to now appeal this denial of his release to the appeals court. And so he still could get released if the appeals court decides to reverse that decision as well.

MARTIN: Is there any effort being made to change the venue?

Mr. WITT: They tried a motion to recuse the judge, and they had a visiting judge come in to hear that motion, but that motion, too, was denied. So they're having trouble getting it out of that venue. I know the other defendants are all vigorously pursuing a change of venue before they actually come to trial.

MARTIN: All right. Let's talk a little bit about the - sort of the bigger issues sort of in the town as we've talked about. There were thousands of protesters there last week, and now, as you've written, there seems to be a backlash brewing. Tell me about that.

Mr. WITT: Yes. It's a pretty unfortunate backlash now, but I think not surprising, considering the way race relations go in our country. And what we've seen now is a pretty strong backlash from white supremacists, the neo-Nazi groups. No sooner did the marchers leave last week than a neo-Nazi Web site posted what they thought were home addresses and telephone numbers for many of these six defendants and their families. It turns out that a number of those phone numbers were wrong or disconnected, and many of the addresses aren't right, either.

But the point is that they're trying to expose them to some kind of further harassment. And, in fact, this neo-Nazi Web site made it clear with no uncertain terms they were actually urging their followers to go, quote, "drag them out of their houses," close quote. There's been occasion - an investigation from the Justice Department, the FBI and also the state police in Louisiana. The local sheriff's office stepped up patrols around the homes of these six defendants to try to make sure nothing actually happens to them.

In addition, all kinds of horrible vitriol has now been unleashed on these white supremacists Web sites and blogs. And perhaps the most unusual development was one particular white supremacist, a man named Richard Barrett, actually went down to Jena the day before the rally and extracted interviews or conducted interviews, if you will, with the town's mayor and also with the Barker family, with Justin Barker and his parents. And he got them both to basically endorse his beliefs about white supremacy and how things were being twisted. The mayor, in fact, was quoted by this fellow Barrett on his Web site as saying he thanked Barrett and others for their moral support.

MARTIN: Any reactions to - I think it was Richard Barrett who is the group which - they call themselves a Nationalist Movement. Of course, other people consider them white supremacists. Richard Barrett talked to my NPR colleague Farai Chideya on her program NEWS & NOTES, and she then got a - about his interview, he, of course, says that his interview was accurate. And then she got a response from the mayor. He did not speak on the program, but he issued her an e-mail written response saying that he didn't know he was being interviewed, and that he didn't want his town associated with this - a white supremacists or any white supremacist organization.

MARTIN: So I wanted to ask, what are you hearing from folks in Jena? Do they -who do they believe?

Mr. WITT: Yeah. I saw the mayor's statement about that. And, you know, that certainly is his claim. It's the same claim that the Barkers made, that they didn't know who this guy was. But Barrett says that the Barkers, you know, he invited the Barkers to look over all of his materials, to look at his Web site, and they invited him to stay overnight at their house and eat dinner with them and spend the night. So I find it a little hard to believe that they couldn't understand who this guy was.

But this only adds to this tremendous chasm that's in that town between whites and blacks, as far as just the whole perceptions. The whites continue to insist there's nothing wrong in our town. Everybody says this is a normal town. Everybody is nice to each other, and why is the media twisting this? And, of course, black folks from inside and outside the town perceive something pretty different.

MARTIN: All right. Howard Witt is the Southwest bureau chief for the Chicago Tribune. He joined us from his home office in Houston.

Howard, thanks so much for keeping us up-to-date.