Accessibility links
Ovarian Cancer: Early Diagnosis Poses Challenges Ovarian cancer is often called the "silent" cancer. Often it has already spread by the time it is diagnosed. New guidelines urge women and their doctors to pay attention to early symptoms, but some experts aren't sure they are helpful. 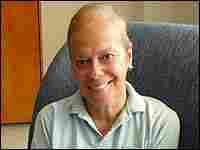 Ovarian cancer is not the most common female cancer, but it is the deadliest because it is often caught so late. Tests are unreliable, and new guidelines are controversial.

Read about how ovarian cancer is diagnosed.

Mrs. J.L., who works as a lunch lady in a Massachusetts school, is one of 23,000 American women who will get a dreaded diagnosis this year: ovarian cancer.

It's the deadliest female malignancy.

Last week Mrs. J.L. (her initials are used to protect her privacy) was in an operating room at Massachusetts General Hospital while surgeons huddled over her abdomen, searching with their eyes and their fingers for tumors.

"When we first looked at her she had tiny spots, two or three millimeters of cancer, all through her entire abdomen," Duska says. "And there were also bigger spots of cancer on her bladder, on her colon, behind her uterus."

Unfortunately, this is typical. Eight out of 10 women with ovarian cancer have a widespread disease, called Stage III or IV. Their chances of cure are low.

For years, ovarian cancer was called a "silent" killer — causing no symptoms until it was too late to be cured. There's no good screening test for ovarian cancer, like a Pap smear for cervical cancer or colonoscopy for colorectal cancer.

But in recent years, data from Dr. Barbara Goff at the University of Washington and other researchers have challenged the notion that early stages of ovarian cancer give no warning. Interviewing women after their diagnosis and comparing them with similar women without ovarian cancer, the researchers found the cancer patients often had suffered symptoms. But they weren't recognized as signaling possible ovarian cancer.

That's because the symptoms are common and unspecific — and they can point to a wide variety of underlying causes.

The most prominent warning symptoms for ovarian cancer Goff and her colleagues found are: bloating, pelvic or abdominal pain; difficulty eating or feeling full quickly; and a frequent or urgent need to urinate.

The key indicator, they say, is if such symptoms — alone or together — come out of the blue and persist, occurring almost daily for more than two or three weeks.

This summer, the Gynecologic Cancer Foundation and 19 other groups concerned with women's health put out a consensus statement urging women and their doctors to pay serious attention to these early symptoms of what might be ovarian cancer.

Duska says the symptoms are often ignored or misinterpreted — while the cancer grows.

"We all have stories of months and months of (women) being worked up ... colonoscopy and all sorts of other tests, before somebody figured out what was going on," she says.

Beth Bennett, a 54-year-old New Hampshire woman, says this was her story. She was finally diagnosed with ovarian cancer at 9:30 a.m. on July 15, 2005 — the time and date are seared into her memory.

"It started very slowly, where I would just have these twinge of cramps, which I didn't think too much about," Bennett says. "But I had just had my annual checkup with my gynecologist, so I called. And they really didn't think it was anything."

That was in April 2005. After that, the symptoms piled up while Bennett's doctors scratched their heads — even after an ultrasound test showed a mass the size of an orange on her left ovary. Her gynecologist thought it was a benign cyst.

It took four months before her ovarian cancer was recognized for what it was — and the diagnosis came only after she started hemorrhaging badly.

Bennett says she hears this story from many women she has met since.

"I have this whole group of friends now who have ovarian cancer," she says as she waits to discuss a new chemotherapy regimen with her doctors. "They all tell me the same thing — that they had no idea. Not a clue! Every one of them was diagnosed late."

Duska says women who think they're having signs of possible ovarian cancer need to be as persistent as their symptoms.

"They really need to push their physicians ... to get to the next step," Duska says. "A lot of them have told me, 'I've had to go back to my doctor multiple times and say something is really wrong with me and you need to figure it out.'"

The American Cancer Society agrees. It signed on to the new guidelines — but with reservations.

Dr. Debbie Saslow, who heads breast and gynecological cancer programs for the cancer society, says the group is worried that many women with common symptoms — most of which will not turn out to be ovarian cancer — might be unduly alarmed by the new consensus statement. There's anecdotal evidence that this may be happening.

"Unfortunately, as we had feared, there have been women who have seen media coverage of this statement and have run to their doctors because they feel bloated or they feel some pain," Saslow says.

She adds that some women have "been very insistent about getting tests, such as CA-125, that are inaccurate." CA-125 is a blood test that can indicate ovarian cancer. But it's often a false alarm.

Ultrasounds can help rule out ovarian cancer. But, as Beth Bennett's experience shows, they can be misleading too. The only sure diagnosis is by exploratory surgery called a laparoscopy. The American Cancer Society is concerned about unnecessary laparoscopies, but Saslow says, on balance, this concern was outweighed by the hope that more women will get life-saving early diagnoses.

"The alternative," Saslow says, "is to not say anything and to continue having women who then later get ovarian cancer say, 'Why didn't anyone tell me about these symptoms?' or 'I did tell my doctor and he or she told me not to worry about that.'"

Duska, the Boston surgeon, has seen no sign that women are overreacting. But she acknowledges that it could be years before we know if the guidelines will make ovarian cancer as curable as breast cancer usually is now.

Ovarian cancer is a rare disease, but it is often deadly because it is difficult to diagnose. Usually, by the time it is detected it has already spread.

New guidelines suggest possible warning signs for detecting ovarian cancer. Here are some things to consider when attempting to diagnose the disease:

What do the new guidelines say are possible warning signs of ovarian cancer?

The symptoms include bloating, pelvic or abdominal pain, difficulty eating or feeling full quickly, and an urgent or frequent need to urinate.

If any of these symptoms arise suddenly — alone or in combination — and if they occur every day or almost daily for more than two or three weeks, the guidelines advise seeing either a primary care doctor or gynecologist to investigate the cause.

Are there tests doctors can use to tell if these symptoms do signal ovarian cancer?

No. Unfortunately, there's no specific test for ovarian cancer, such as the Pap smear for cervical cancer. And, most of the time, the symptoms will not be due to ovarian cancer, which is a rare disease.

Doctors should first closely question patients with these symptoms and try to determine if there's another, more likely explanation — for instance, infection or diet. They should do a careful pelvic exam. But if the symptoms persist without other apparent cause, physicians should not delay in assessing the possibility of ovarian cancer. This can involve ultrasound exams, a blood test called CA-125, and, ultimately, exploratory surgery through a minimally invasive approach called laparoscopy.

What is the CA-125 test and how good is it in diagnosing ovarian cancer or ruling it out?

CA-125 is a protein in the blood which can be associated with ovarian cancer. But the test for CA-125 is notoriously unreliable, since a high level of the protein can be present without having ovarian cancer — and a negative test result doesn't necessarily mean ovarian cancer is absent.

Three years ago the National Preventive Services Task Force recommended against using CA-125 or ultrasound tests to screen women for ovarian cancer. Some doctors use CA-125 in women at high risk for ovarian cancer, due to genetic markers or family history. If levels of CA-125 rise over several successive tests, this can be a signal to explore further.

Why are the new guidelines controversial?

There are two main reasons. First, some doctors fear the guidelines will alarm many women who suffer from the listed symptoms, sending them down the road of costly and unnecessary diagnostic tests — including surgery — for things that will turn out not to be ovarian cancer. Patient advocates argue this can be minimized if women and their doctors pay close attention only to symptoms that are new, regular and persistent for at least several weeks.

Second, experts differ on whether finding ovarian cancer earlier will really lead to higher cure rates. It's possible that by the time symptoms are present, the cancer may already have spread. On the other hand, the total tumor mass may be smaller and thus present a better prospect for cure through surgery and chemotherapy. Only large prospective studies that follow women for several years after diagnosis will answer the question.

How early does ovarian cancer need to be detected to be curable?

The earlier the stage (from Stage I to Stage IV) the greater the chance of cure. About 80 percent of Stage III patients — with cancer outside the ovaries and Fallopian tubes, but still confined to the abdomen — will achieve remissions. This means they will have no visible traces of cancer following treatment. But cancer will recur in 80 percent of those patients who have been in remission.

Among women whose cancer is found when it is still Stage I — confined to the ovary and Fallopian tubes — 93 percent are still alive five years later. However, only one-in-five ovarian cancer patients is diagnosed that early.

Researchers aren't sure how long an ovarian cancer has been growing in a woman's body when she has any given stage of cancer. (By comparison, breast cancer is thought to take years to get to the detectable stage.) It's likely that there are different kinds of ovarian cancer, some more aggressive and fast-growing than others.

What are the current treatment options for ovarian cancer?

Surgery is almost always the first step. Often the ovaries and Fallopian tubes are removed with nearby lymph nodes through a "Band-Aid incision" when the diagnosis is made. At that time, surgeons assess the extent of disease and involvement of other organs, which will determine the stage of cancer — and the scope of further surgery. Doctors usually prescribe chemotherapy of various kinds, since ovarian cancer is assumed to have seeded itself within the abdomen and, perhaps, beyond by the time is has been diagnosed. Chemotherapy is given intravenously, by mouth, and sometimes directly into the abdominal cavity, depending on the type.