Accessibility links
Baltimore's Confident New Conductor Conductor Marin Alsop recently made history by being named the first woman to head a major American orchestra. She plans to lead the Baltimore Symphony in a mix of cutting-edge contemporary pieces and core classics.

Marin Alsop Ushers in New Era for the Baltimore Symphony 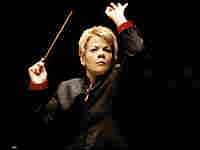 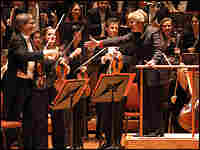 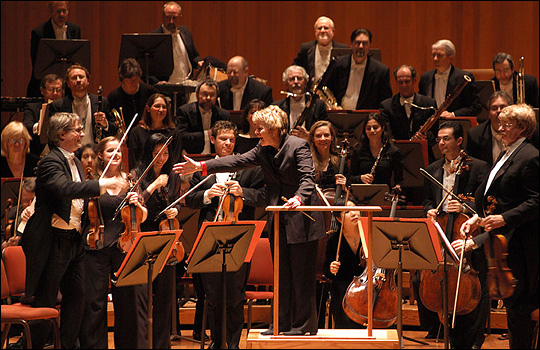 In the summer of 2005, an assortment of newspapers — first in Baltimore, then in New York and Washington, then around the country — ran stories about controversy brewing at the Baltimore Symphony. Word leaked out that the symphony would appoint 48-year-old American conductor Marin Alsop to be its Music Director beginning in the fall of 2007.

Alsop would become the first woman chosen to lead a major American orchestra. But then, one dissenting board member, as well as some musicians in the Baltimore Symphony, went public with their unhappiness about Alsop's impending appointment. As it turned out, the dissenters were mostly upset with how the choice was made, rather than who was chosen.

Two years have passed. Alsop has worked with the Baltimore Symphony, conducted concerts with the group and earned the respect of critics, audiences and the musicians in the orchestra.

On Sept. 27, she leads the Baltimore Symphony in her inaugural concert as the orchestra's new Music Director. She conducts Mahler's Symphony No. 5 and Fearful Symmetries by John Adams.

Dvorak's Symphony to Shake the World

To mark Alsop's inaugural concert, we'll go back to revisit one of the highly praised concerts Alsop gave with the Baltimore Symphony after her announcement was made.

The setting is the orchestra's home turf, at Meyerhoff Hall in Baltimore, and the anchor piece of the concert was Antonin Dvorak's Symphony No. 7.

The Washington Post's music critic Tim Page attended the concert, and his review held out high hopes for the future.

"If this level of music making — urgent, elastic, colorful and versatile — can be maintained, Baltimore will be in for some exciting times," Page wrote. "Under Alsop's stirring, energetic direction, the BSO produced a big, hearty sound that never lost its transparency; this was a performance of energy and style."

In 1884, expectations were great for Dvorak's Symphony No. 7, both for the public (the work was commissioned by the London Philharmonic Society) and the composer himself.

Dvorak said he wanted his new symphony to "shake the world." Marin Alsop says one of the ways Dvorak tried to achieve that end in the music was to summon the spirit of his homeland.

"Dvorak's seventh symphony was a turning point in his career," Alsop says. "He was at a place of international respect, and writing this piece for a London audience gave him an opportunity to showcase his pride in his Czech nationality. It was critical to Dvorak as a human being, as an artist, that he preserve and promote his homeland. The Symphony is not overtly folk-music-derived, but at the same time it has this rhythmic, Slavic quality to it that is quintessential Dvorak."