Accessibility links
The Educated Palate: Colleges Expel Mystery Meat The days of mystery meat are nearly over. At some college cafeterias around the country, menus feature sushi, wood-fired pizzas and gourmet specials — all in response to the picky palates of college students. 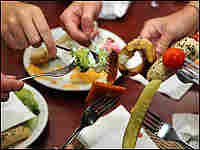 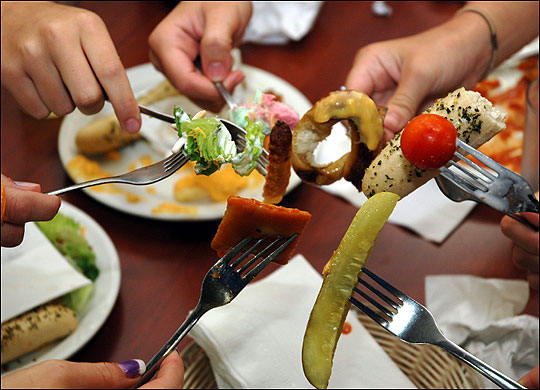 At Wheaton College in Illinois, the cafeteria's specials sound like they're from a gourmet restaurant: There is Asian duck consomme, mussel bisque with roasted corn, pesto-crusted pork loin and oven-roasted beef with a black-pepper demiglace.

Wheaton, a Christian liberal arts school with small classes and Division III sports, recently ranked third on the Princeton Review's Best 366 Colleges. Topping the list — which was rated by students — was Virginia Tech.

Richard Johnson, director of dining services at Virginia Tech, says one student this fall told him he came to the college because of the food. Johnson says it's a consumer economy and the school looks at students as customers.

At Virginia Tech, pizza is cooked over hickory wood that the university splits itself. Campus chefs worked for three months on their gumbo, because if they're going to serve gumbo at Virginia Tech it's got to be as good as the gumbo in New Orleans.

And if neither gumbo nor wood-fired pizza appeals to students, there's always the whole lobster or the 16-ounce ribeye — both cooked to order, of course.

Virginia Tech just bumped Bowdoin College from first place in the campus food ranking. The small school in Maine uses students' family recipes for that home-cooked taste. Bowdoin also gets points for starting the school year with a lobster bake and for its policy of buying local seafood and produce.

Buying locally and thinking about sustainability are growing trends on campus. The University of California at Berkeley has even put in a certified organic kitchen.

Schools know they have to listen to their students who want to start the day with a fair-trade latte and end it with hormone-free meat on their hickory-cooked pizza.

It's not a perfect world, though. There are plenty of Burger Kings and Chick-fil-A's on campus. And the companion list to 'Best Campus Food' is one called 'Is This Food?' It's pretty long.

But schools are listening. When I was in college, it never occurred to me to complain about the mystery meat we were served to anyone but my roommate.

Of course, when I was in college you had to wear a skirt to dinner.

Bonny Wolf is author of Talking With My Mouth Full and host of 'Kitchen Window,' NPR's food podcast.