Accessibility links
Part Three: Broadway to Hollywood — and Beyond Critics were lukewarm about West Side Story onstage, and some audiences found it alienating. The 1961 movie won 10 Oscars, though — never mind that Broadway librettist Arthur Laurents hated it — and sealed the show's success. In 50 years, it's been staged more than 40,000 times. 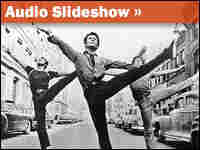 Slideshow: See and hear 50 years of 'West Side Story' magic. 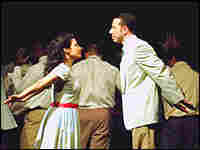 Maria (Elizabeth Speck, a visiting performer) and Tony (maximum-security inmate Johnny Hincapie) meet at the dance — and everything else fades away — in a production staged earlier this year at New York 's Sing Sing Correctional Facility. Below, Dario Pena's Bernardo comes between the lovers. Brent Buell hide caption 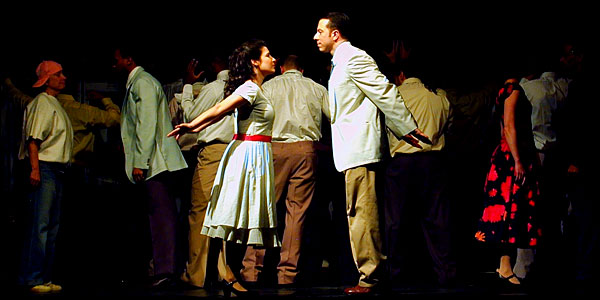 Maria (Elizabeth Speck, a visiting performer) and Tony (maximum-security inmate Johnny Hincapie) meet at the dance — and everything else fades away — in a production staged earlier this year at New York 's Sing Sing Correctional Facility. Below, Dario Pena's Bernardo comes between the lovers. 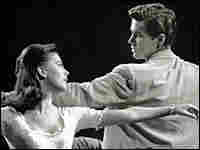 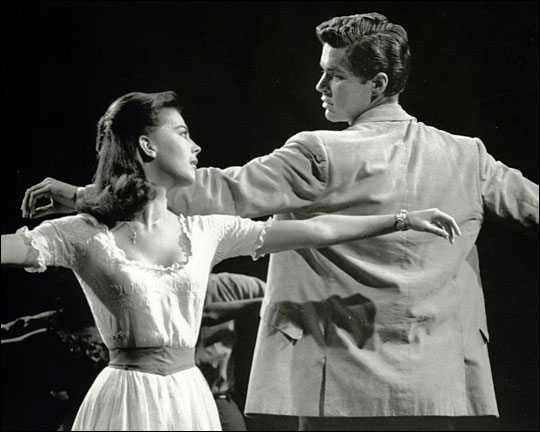 The 1961 film, with Natalie Wood and Richard Beymer, won 10 Oscars and established West Side Story as a bona fide cultural touchstone.

The movie, I thought, and still think, was appalling ... [It] begins, and you see all these boys with dyed hair, color-coordinated sneakers, doing tour jetés down a New York street. Not in this life. 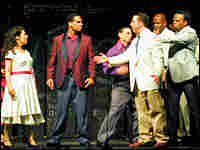 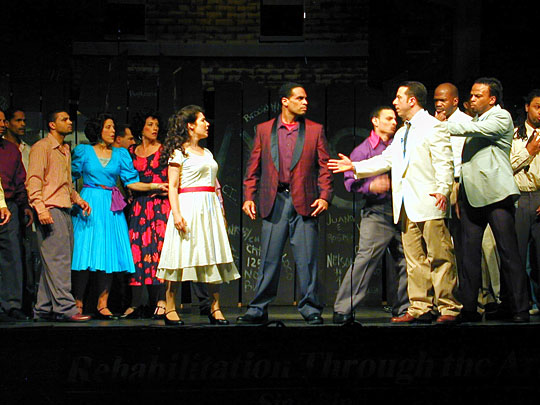 Harvey Evans: We turn a corner and we're a year older.

Harvey Evans: 'We took our knee pads and set them on fire ...'

West Side Story is one of the best musicals ever written, according to Frank Rich, former chief theater critic at New York Times.

And Rich's favorite moment is the "Tonight" quintet: The gangs are getting ready for a rumble, while the lovers are planning a rendezvous.

"Bernstein's bringing all these themes together — it's such highly charged drama," says Rich. "It's the fulcrum of the show, dramatically, when everything has become like a train rushing forward, in a tragedy. And you have this sense of cinematic cross-cutting, done without cinema; done by the art of the theater. That is pretty hard to beat."

The critics in 1957 weren't nearly as generous. "Its reviews were good, not great," says producer Hal Prince. "Walter Kerr referred to it as 'cold.' We drew audiences. We got no awards. The big hit that year was The Music Man."

That show — Meredith Willson's sweetly nostalgic look at early-20th century Iowa — was a monster hit, the perfect escapist entertainment for tired businessmen. It swept all the major awards that year, including the Drama Critics Circle prize.

"I don't want to take anything way from The Music Man, which is a very nice show and classic in its own right," says Frank Rich. "But it is ridiculous that the critics [chose] that over West Side Story."

The show did take home a Tony Award for best choreography. And it was a modest Broadway success.

"Now the show did not, by the way, sell out for the year or so it ran on Broadway," Prince remembers. "It also had maybe a hundred walk-outs every single night — people totally confused by what it was, and rejecting it."

But then, he says, it went off to be a movie.

"And the movie became a big windfall for our investors, for everybody," Prince says.

'A Disneyfied Version of Gang Warfare'

In fact, most people now know West Side Story primarily through the movie. Released in 1961, it starred Natalie Wood and Rita Moreno and was co-directed by Robert Wise and Jerome Robbins. The film was a global hit and won 10 Academy Awards. Rich, the former New York Times critic, doesn't think the movie is as good as the show, but he understands its appeal.

And there's a "magical element" to the locations Robbins used for filming, Rich says.

"It was shot on the West Side of New York, in the area that's now Lincoln Center, when all those buildings were condemned for Lincoln Center, but had not been torn down yet," Rich says. "So it does have a kind of grit it would not have had, if it had been done on a sound stage in Hollywood."

Robbins' rehearsals were as rigorous for the film version as they'd been for Broadway, according to Harvey Evans, who played Mouthpiece — one of the Jets gang — in the movie.

"Even before Natalie was hired, we were working on that Prologue for two months," Evans recalls. "And he would experiment with everything. We did it in front of a Salvador Dali kind of surrealistic drop once. Then we would go down to Los Angeles to the slum section, and we would test stuff down there. And we did it with a lot of dancing, and then we did it with no dancing. And so by the time we came to New York, two months had gone by — and quite a bit of the money had gone, too."

In fact, Robbins took so much time, and went so far over budget, that he was eventually fired by the film's producers.

"They didn't let Jerry go until he had choreographed and rehearsed all the dance numbers," Evans remembers. "So everything was ready. And the best parts of the movie are what Jerry did: 'America' and the Prologue and 'Cool.'

Writer Arthur Laurents, whose work was adapted for the screen by Ernest Lehman, hated the Hollywood version.

"The movie, I thought, and still think, was appalling," says Laurents. "Film is either realistic or surreal. And a musical, to succeed, needs illusion. West Side Story begins, and you see all these boys, with dyed hair, color-coordinated sneakers, doing tour jetés down a New York street. Not in this life.

"And then, when the so-called Puerto Ricans came on, made up to look like day-glo characters for some caricature of what they think Hispanics are — it was really disgraceful."

The stereotypes perpetuated by the filmmakers infuriated Rita Moreno, who won an Oscar for her portrayal of Anita.

"They made me use an accent, which I wasn't thrilled about, because a lot of us, obviously, don't have them," Moreno said on Fresh Air from WHYY. "The thing that really bothered me the most is that they put the same very muddy, dark-colored makeup on every Shark girl and boy. And that really made me very upset."

Although Moreno was perfectly capable of singing her part, it was dubbed by Betty Wand. In fact, all the lead roles in the movie were dubbed. Marni Nixon sang Natalie Wood's part — a good thing, since Wood had a terrible singing voice.

And she was temperamental. To keep Wood from walking off the set, Nixon says, the producers filmed the star singing to her own vocal tracks, then mixed Nixon in later.

"Natalie was not sure how much of her voice would be used at all," Nixon remembers. "And she was really furious when, at the end, they told her that I had to really come back and redub the whole thing."

And all of those supposedly unsingable songs? Since West Side Story opened, they've become ubiquitous. They've been recorded by everybody from Johnny Mathis to Barbra Streisand to Oscar Peterson to Little Richard. Kiri Te Kanawa and Jose Carreras recorded an operatic version. Conducted by Leonard Bernstein himself, it topped the crossover charts.

Now, not a day goes by when West Side Story isn't performed somewhere in the world.

"We tried to do a rough calculation, based on the 50 years that we've represented the show," says Freddie Gershon, owner of Music Theater International, the company that licenses West Side Story to amateur and professional groups. "We calculate that there have been approximately 40,000 separate productions."

Gershon says over half of the 600 yearly productions are done overseas.

"No matter what country you're in, no matter what language you do it in, it always works," Gershon says. He sees a lot of those 600 productions, too — and he says some of the high-school versions are better in many ways than some professioal stagings.

Not long ago, West Side Story was staged at SAR High School in the Bronx. It's a yeshiva — a Jewish day school for modern Orthodox students. Both the Sharks and the Jets wore yarmulkes. Teacher Kenny Birnbaum was the music director for the production, and he says that because of certain Jewish laws, staging the show proved a challenge.

"We had choreography where the students were close and dancing in pairs," Birnbaum says, "but never touching each other."

Still, the show still packed a wallop, both for the students and for the sold-out audiences.

"They also have to deal with the real issues that the play raises: How do we treat other people of different religions and ethnic groups and races?" Birnbaum says. "And sometimes when you're in an insular community, like the Jewish community can sometimes be, it really challenges us and really pushes us to think outside the box. And that's part of why this play is so important."

Several miles north of the Bronx is the Sing Sing Correctional Facility, a maximum security prison. For the past 11 years, a nonprofit organization called Rehabilitation Through the Arts has worked with the inmates to stage plays. Their first musical? West Side Story.

Clarence "Divine Eye" Maclin has served 12 years of a 20-year sentence for armed robbery. He was a gang member on the outside.

"This particular play really brought the guys together, because of the issue — because of the gang issue," says Maclin. "The original play was Latinos against white guys. Here, we don't really have a large population of white people in our production company, but it was more Latinos [against] blacks. And these are issues that we really deal with, in the yard here, in the mess hall here, all throughout the jail system, we really deal with these issues: Latinos and blacks, now how to co-exist?"

Maclin finds the finale of West Side Story especially moving. He says it's eye-opening when the Jets and Sharks come together to pick up Tony's dead body.

So audiences and casts at a maximum security prison, or a yeshiva in the Bronx, or a theater in Korea all can relate to West Side Story. That doesn't surprise conductor John Mauceri.

"West Side Story not only changed the way we view the possibilities of what a musical could do, it actually changed the world," says Mauceri. "But if you talk to Lenny or to Steve Sondheim or Arthur Laurents or Jerome Robbins, they would tell you, 'We were just trying to write a show.'

"That's the beautiful part of it. They weren't trying to make history. They were just trying to tell a story that needed to be told."