Accessibility links
Diyala Still in Turmoil After U.S. Occupation A visit to a small village explores U.S. military claims that its occupation of Iraq's Diyala province has increased security there. Insurgent attacks continue, the local economy is suffering and the local population is increasingly anti-American. 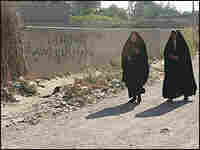 Women walk past a wall spray-painted with an edict that bans women from leaving their houses without wearing the abaya, the all-encompassing black robe. Jamie Tarabay, NPR hide caption 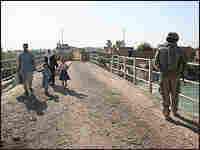 An American armored vehicle is permanently parked in the middle of the town's one-lane bridge. Jamie Tarabay, NPR hide caption

In Iraq six months ago, United States forces took over a small rural village in Diyala Province, northeast of Baghdad, in an effort to secure a one lane bridge — and cripple the ability of Sunni insurgents in the area to launch attacks.

One leader of U.S. military operations in the area says that while the base still gets mortar fire, and occasional gunfire, the measure has been largely effective. But it has come at the cost of alienating a community, driving people away and shutting down their economy.

One of the first things the Americans did in the village of Shakarat, a stark brown speck hidden in miles of lush green fields and a forest of date palms, was to take over the only two story house on Shakarat's main street, a few yards from the small bridge. The bridge has been the village's lifeline for decades; it's the only canal crossing for miles.

But as U.S. troops moved into this area there was an increase in the number of insurgents; one consequence of the surge in Baghdad was the relocation of fighters to places like Diyala.

"This is the site of the house-borne IED that killed an Iraqi soldier," he says. "And there was also a chlorine attack (at the) end of July where they brought in a couple of chlorine tanks, opened up all the valves, let them run off in town and, at that point, most of the town left."

So now, giant sandbags around the U.S. base have been replaced by massive concrete blast walls that stretch down both sides of the road. The street is now silent — the vast majority of shops are closed.

Panaro says the U.S. military and the local village chief tried to convince people to return to the town, which now has about 100 residents. The rest, Panaro says, left because the closure of the bridge to vehicular traffic has killed off local business.

A handful of shops are still open in the town, including a metal work shop. Next door colorful headscarves for women flutter in the breeze.

An American armored vehicle is now permanently parked in the middle of the bridge.

Iraqi men crossing into the village lift their shirts to show they're not hiding explosives. Women are searched by female American soldiers.

Along the village's cement walls insurgents have spray-painted an edict. Women are forbidden from going outside without wearing an abaya, the all encompassing black robe. Other freshly painted graffiti reads "Long Live the Islamic State of Iraq" — the umbrella group for Al Qaida in Iraq and its allies.

Resident Ayash Khalaf Awad says he's moving because there's no work here. He blames Panaro and the other American soldiers for the drop in business.

While walking away, Panaro says he knows there are scouts in the village who work for the insurgents. People here have been too afraid to even collect their food rations from military distribution points for fear they would be marked as collaborating with the Americans.