Accessibility links
Senate Race Marked Edwards as Rising Political Star During his first run for office in 1998, Democrat John Edwards used his telegenic personality and a populist message to win a North Carolina Senate race. For much of the past five years, his sights have been set on the White House. 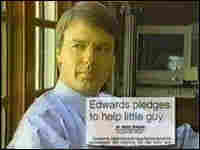 John Edwards, in a video still from a 1998 campaign ad. During that Senate race, Edwards cast himself as a reformer and "the people's senator." Edwards Campaign hide caption 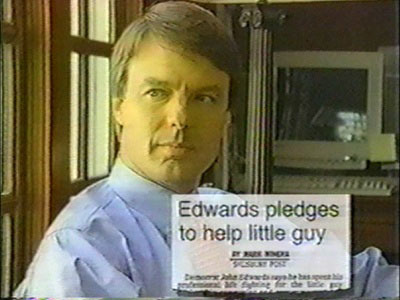 John Edwards, in a video still from a 1998 campaign ad. During that Senate race, Edwards cast himself as a reformer and "the people's senator." 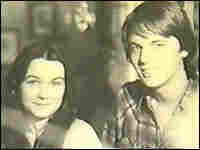 Edwards' campaign ads also introduced voters to his wife, Elizabeth, and to his life story as the son of a mill worker. Edwards Campaign hide caption 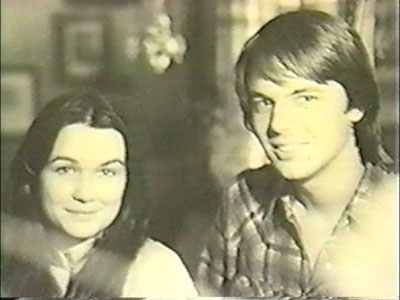 Edwards' campaign ads also introduced voters to his wife, Elizabeth, and to his life story as the son of a mill worker.

Read a Profile of Edwards

Read about John Edwards' political career and his prospects as a presidential candidate.

As John Edwards makes his second bid for the Democratic presidential nomination this year, he also marks the 10th anniversary of his political debut. In 1997, Edwards began his quest for a U.S. Senate seat from North Carolina. The race would mark him as a rising Democratic star.

Edwards began his first campaign with high ambitions and a thin political resume. Edwards entered the race against a Senate incumbent without ever having worked in government or politics; in several elections leading up to his race, he hadn't even voted.

"He was talking about a friend of his who had been a successful lawyer and wanted to get involved in politics, and he wanted to run for Senate," Pearce recalls. "I said, 'Well, state senate?' And he said, 'Oh, no, United States Senate. I said, 'Well, this I got to see.'"

What Pearce saw was enough to persuade him to go to work for Edwards' fledgling campaign. He found the 44-year-old trial lawyer unusually energetic and telegenic — a fresh face who Pearce felt would be a strong challenger to Sen. Lauch Faircloth, the 70-year-old Republican incumbent.

"Edwards at the time was raw political talent," Pearce says. "He knew nothing about politics, but he knew how to connect with people. And he could look in a camera, master a script and deliver it better than anybody I've ever seen."

Edwards spent more than $6 million of his own money on the race, much of it on TV ads that presented him as everything Lauch Faircloth wasn't. While Faircloth had spent a lifetime in government, Edwards was an outsider. While Faircloth was a pro-business conservative, Edwards ran as a populist moderate. And while Faircloth was an uncomfortable campaigner with a grandfatherly appearance, Edwards had a youthful look that would later lead People magazine to name him the "sexiest politician alive."

Chuck Fuller, who managed Faircloth's campaign, says it was difficult for Faircloth, who had "40 years in North Carolina, giving back to the state" to run "against somebody that was flashy and had a good haircut."

Faircloth's campaign was so afraid of Edwards' flashiness that the incumbent refused to debate him. At one political forum, they went out of their way to make sure Faircloth and Edwards weren't even seen together. But the Faircloth campaign gained little traction from attacking Edwards as dishonest and too liberal for Southern voters.

For his part, Edwards traveled around North Carolina casting himself as a reformer. Many of the issues Edwards talked about that year would sound familiar to people who've followed his presidential campaigns. He called for raising the minimum wage and reducing the cost of health care. And then, as now, he said Washington politicians are too beholden to well-heeled lobbyists.

"We have got to start the process of restoring people's faith, making them believe again that this really is a democracy, and that their voice matters when decisions are being made in Washington," Edwards said during the 1998 campaign. It's a theme he oft repeated during his 2004 and current White House run.

Shifting Positions on the Issues

But Edwards' positions on some issues have shifted since 1998. Then, he said the federal government "desperately needed" a balanced budget. Now — as he proposes a $100 billion a year health care plan — he says balancing the budget isn't a priority. He promised not to support tax increases in the Senate, but now backs higher taxes on the wealthy.

And while Edwards today aggressively courts the support of labor unions, he seemed to discount their importance in a 1998 radio interview in which he said, "What my focus is, is on the working people. And most of the working people in North Carolina are not members of labor unions." He added, "I just don't think labor unions are an enormous issue in North Carolina one way or the other. We have a right to work law. I do not support the changing of that law."

To some of Edwards' critics, his policy shifts over the past decade prove one of the things his opponent said about him in that 1998 campaign — that he's more liberal than he let on during his first race. Faircloth campaign official Fuller says that once Edwards got to Washington, he moved sharply left.

"After the '98 campaign, the people of North Carolina quickly learned that just because you spoke with a Southern drawl didn't make you a moderate," Fuller says of Edwards. "He painted a picture to tell us one thing, and then when he got to Washington, we found out that wasn't true."

But Edwards' supporters say what they've seen in him over the past 10 years is growth — a deeper understanding of issues that has resulted in more finessed policy positions. And Pearce, the Democratic consultant, says Edwards hasn't swayed from the values he showed as a political newcomer.

"Everybody changes in 10 years, but basically, his approach hasn't changed," Pearce says. "The basic core of what he tapped into is a concern by people of whether politics represents me."

When Edwards gave his victory speech in November 1998, he said that North Carolina voters had "voted their hopes instead of their fears." It was his first — and so far, his only — election win. By 2002 — about halfway through his Senate term — he began running for national office — a pursuit he has continued with few interruptions for most of the past five years.