Accessibility links
Sen. Coleman Battles Anti-War Sentiments Sen. Norm Coleman, a Republican from Minnesota, runs for re-election amid rampant anti-war sentiments. While anti-war Democrats contest his 2008 bid, constituents are not bashful about challenging his position on the war in Iraq.

Sen. Norm Coleman, a Republican from Minnesota, runs for re-election amid rampant anti-war sentiments. While anti-war Democrats contest his 2008 bid, constituents are not bashful about challenging his position on the war in Iraq. 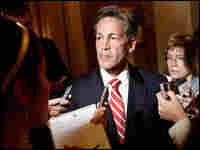 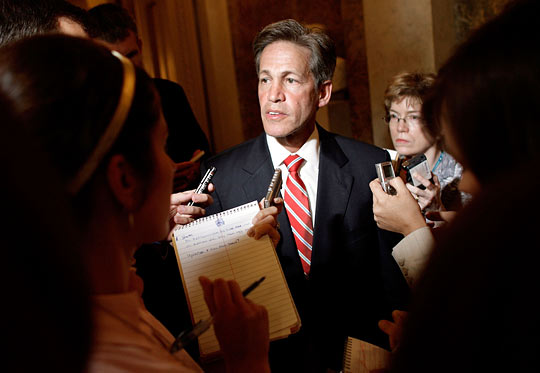 This is MORNING EDITION from NPR News. I'm Renee Montagne at NPR West.

We're visiting a battleground in the war over Iraq. People in this midwestern city are pressing their lawmakers to stop the war, or to continue it. They use demonstrations and commercials, and the pressure is especially visible on this cobblestone street.

Republican Senator Norm Coleman lives in the yellow house near the corner. He supports the war. But if he looks out his window, he can hardly miss the red anti-war signs that his own neighbors placed on lawn after lawn after lawn.

Ms. SUSAN RUNHOLDT(ph) (Neighbor): I think it's important to remind him that his constituents do not want this war.

INSKEEP: Susan Runholdt's living room has a view of Norm Coleman's front lawn. She's one of the neighbors who brought yet another sign to an anti-war rally.

Ms. REYNOLDS: I have it out in the back, that says Norm's neighbors against the war.

INSKEEP: Anti-war activists arranged for signs up and down this block; that is just one of their activities in a state that presidential candidates battled over in recent years. It is also one of the states that may affect control of the Senate. Susan Runholdt's Republican senator, Norm Coleman, is up for reelection in 2008.

Have you met him?

Ms. REYNOLDS: Oh heavens, he's been my neighbor for 20 years. Yes, I know him quite well.

INSKEEP: Have you had the chance to talk with him since the start of the war in Iraq?

INSKEEP: What kinds of things have you said?

Ms. REYNOLDS: I have simply said that I hope that he votes to get us out of Iraq.

INSKEEP: Even on days that Senator Coleman does not run into an anxious neighbor and doesn't notice the yard signs, he might still encounter pressure over Iraq when he turns on the TV.

Unidentified Man #1: How long will Senator Norm Coleman keep us stuck in Iraq? Should we start training our children now?

INSKEEP: This commercial shows young children who look bewildered. They've been put into combat fatigues and they're going through military training. The ad is paid for by a group called The Campaign to Defend America. It's one of several interlocking groups that attack the war. Their ad was recently matched by a pro-war group, which broadcast video clips of veterans.

Unidentified Man #2: And we have an important message for Senator Norm Coleman.

Unidentified Man #3: We'd like you to know we believe in this mission and we're proud you do as well.

Unidentified Man #4: We know we will prevail.

INSKEEP: It's not clear how much Senator Coleman appreciated the big public thank you. Polls show many of constituents oppose the war. It is to no accident that for months in Washington, Democrats have been scheduling vote after vote, forcing Republicans, including Senator Coleman, to take sides.

Senator NORM COLEMAN (Republican, Minnesota): I don't feel a lot of pressure one way or the other. So these commercials, they really don't move me. It's not about being pressured. I'm trying to figure out what the right to do is. Iraq is complex. I think that certainly doesn't impact the way that I'm going to, you know, vote or precede on a given amendment.

INSKEEP: What effect does it have on you, if any, when you look at your front window at home and see that anti-war groups have persuaded a whole bunch of your neighbors to put up end-the-war-now signs.

Sen. COLEMAN: I have some neighbors who have - who would like to end the war right now. But I don't think that represents either the majority of Minnesotans, and most important, I don't think that's the right choice.

INSKEEP: And yet as we are going to hear, the senator's position may be evolving. This Republican is a former Democrat. He once protested against the Vietnam War. He switched parties while serving as the mayor of St. Paul in the 1990s. He ran for Senate with White House support in 2002. Now that the president is less popular, anti-war Democrats are lining up to challenge him in 2008.

INSKEEP: The challengers include four contenders who turned up in Eden Prairie, Minnesota this week. It was a potluck event featuring chicken soup, coffee and short speeches.

INSKEEP: That's the comedian Al Franken, who has raised millions of dollars for a Senate race.

INSKEEP: If it turns out that Franken is not the challenger, the other Democrats include a millionaire lawyer. Mike Ciresi expects the campaign to cost up to $15 million.

Mr. MIKE CIRESI (Democratic Senatorial Candidate, Minnesota): Money is not going o be an issue in this campaign.

INSKEEP: You - are you putting some of your more own money in this?

Mr. CIRESI: Money will not be an issue in this campaign. We'll have all the money we need.

INSKEEP: Which means you're willing to put your own money?

INSKEEP: In other words, no matter which Democrats gets the nomination, Senator Coleman may face a test.

We found Mike Ciresi in an anti-war rally this week. Labor unions and other groups were trying to turn up the pressure. The speakers included Becky Laurie(ph), whose son was killed in Iraq.

Ms. BECKY LAURIE: Congress, you need to listen to us, the people. The vast majority of the American people want this war to end. Every poll...

INSKEEP: This rally's attendance appeared to be in the hundreds, not thousands. Yet there's no doubt that Minnesota voters are concerned. And in recent weeks, Republican Senator Norm Coleman has made some surprising moves. He says he still supports the war, but...

Sen. COLEMAN: On the other hand, I truly believe that there needs to be light at the end of the tunnel, that we deserve - Americans deserve to know that we're not going to be in the midst of an Iraqi civil war.

INSKEEP: Senator Coleman endorsed a fellow senator's plan to start withdrawing troops by Christmas. He also voted for a bill that would give U.S. troops more time at home. All of which mystified a Minnesotan who lobbies for the war in Iraq.

Ms. MERRILEE CARLSON (President, Families United): He was going to stand strong, and that's what he was telling us about that.

INSKEEP: Merrilee Carlson works at an engineering office in St. Paul. Her cubicle there is covered with photos of her son, who was killed in Iraq.

INSKEEP: In the photograph, Crystal is clutching a single red rose. Mary Lee Carlson's cubicle even has a photo of Michael's grave at Arlington National Cemetery. It shows his birthday - February 14th, 1982.

He was born on Valentine's Day?

Ms. CARLSON: Yeah. He never told anybody from his unit.

INSKEEP: Carlson says she speaks out in favor of the war in memory of her son's sacrifice. She is president of a group called Families United. She led hundreds of military families to Washington just last week.

Ms. CARLSON: When we had on that Hill, 750 people, 500 Families United people and 250 veterans speaking and sharing and talking, then suddenly there was a voice to be listened to.

INSKEEP: Many families urge their lawmakers to support the president, who also found time to see them. The trip cost about half a million dollars. Carlson says only that it was paid for by patriotic Americans. She says she tried but failed to meet with her senator, Norm Coleman, who so recently voted to limit U.S. troops' time abroad.

Ms. CARLSON: When I heard about his vote, then I was curious to see, you know, what really changed. I can't judge what he's doing. I need to ask him. And that's what's really important for people to know, is they can do that.

Ms. CARLSON: Ask him. Ask him why he's changed, ask him, you know, why do you hold that stand?

INSKEEP: We did ask. The senator says he's been hearing appeals from many constituents.

Are you attempting to represent the concerns of large numbers of Minnesotans who say they're against the war?

Sen. COLEMAN: In some cases, yes, the - early in the year, when Minnesota troops were the first to have their tours of duty extended - we had 2600 National Guard members, and I traveled around the state talking about reintegration. When our folks get home, how are we going to make sure we take care of them? I had moms in tears say to me, Senator, are we talking about reintegration or are we talking about pre-deployment? In other words, when our folks are coming home, how long are they going to be home for? And so my vote was not about distancing from the president or breaking with my party, but is reflecting what Minnesotans told me.

INSKEEP: And if Senator Norm Coleman hasn't heard enough suggestions from his constituents yet, he can expect more. In various times, activists on both sides have set up phone banks. They advertise a number to call in. If you do, and if your opinion is right, they offer to patch you through to your senator or representative, so that you too can voice your view about the war in Iraq.

Unidentified Man: Thank you for calling Freedoms Watch. Our operators are currently helping Americans call Congress in support of our war in terror. Please hold for the next available operator who will help you connect with Congress, so that you can tell them to finish the job in Iraq...