The Many Moods of Les Jazz Modes

The Many Moods of Les Jazz Modes 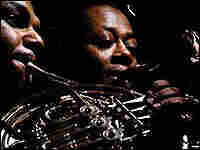 It's billed as jazz, but it begins like opera — filler in Madame Butterfly, perhaps, with that rich soprano tone; the slow French horn obbligato; those pseudo-Japanese pentatonic intervals. But then it unfurls a cascade of splaying cymbals, a dull thud of cloth mallets on a floor tom, a wash of melody. A remarkably sophisticated composition emerges, and as it unfolds, so does the realization that this band's curious ambitions are actually supported by its talent.

In a mid-'50s jazz landscape increasingly dominated by bebop's aftermath, the largely forgotten band Les Jazz Modes stood apart. At the group's core was a quintet led by Julius Watkins, wielding the French horn, and his co-conspirator, tenor saxophonist Charlie Rouse. They took a different tack on prevailing ideas of the day, prioritizing sonority and form: Harp, wordless soprano vocals, Latin percussion and baritone saxophone were regularly appended for timbral effect. Instead of basic head arrangements and unorganized blowing sessions, there were intricate miniature scores; instead of brash and fiery solos, improvisations were soft, rapid, often contrapuntal.

Which isn't to say that Les Jazz Modes ever departed from the rudiments of swing. On the contrary, "Hoo-Tai" takes a brisk up-tempo turn nearly two and a half minutes in, and Rouse launches into a compact but fleshy solo statement. He sounds smooth and fleet, a welcome comparison to the biting, sharp approach that characterized his nine years with Thelonious Monk. But the most pleasant surprise is the sheer facility with which Watkins (also the composer) commands the ungainly French horn — and, moreover, the round, mellifluous way he goes about it. In "Hoo-Tai," Les Jazz Modes' chops integrate deftly with the band's orchestral experiments, and the sum is a finely sculpted, acutely appealing jazz tune.