Accessibility links
Jose Gonzalez in Concert With just a gently played acoustic guitar and a soft voice, Gonzalez makes lovely, memorable music. His radical reworking of others' songs, along with his own delicate folk, have made Gonzalez an indie favorite in the U.S. Hear him in a full concert, recorded live from Washington, D.C.

All Songs in Concert: Jose Gonzalez

All Songs in Concert: Jose Gonzalez 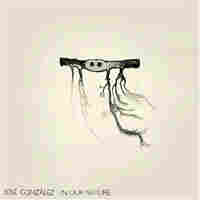 José González's new CD is In Our Nature. hide caption

Download a copy of this concert in the All Songs Considered podcast.

Stay in the Shade

Time to Send Someone Away 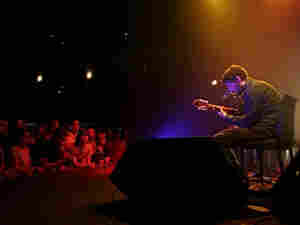 With just a gently played acoustic guitar and a soft voice, José González has made some of the most memorable music of recent years. His radical reworking of songs by Bruce Springsteen, Joy Division and others, along with his own delicate neo-folk music, have made González a gold-selling artist in his native Sweden and an indie favorite in the U.S. Hear González in a full concert, recorded live from Washington, D.C.

González is on tour in support of his new album, In Our Nature, which is his first full-length release in four years. Fans of quiet rainy-day music fell in love with González's previous album, Veneer, a beautifully crafted collection of cover tunes and originals that showed González to be a gifted fingerstyle guitarist with a mesmerizing voice. Songs from Veneer, including the popular "Heartbeats," appeared on TV shows and in commercials.

González was born in Gothburg, Sweden, to Argentine parents in 1978. He grew up listening to classical music, bossa nova and Western pop. "We always had a guitar at home," González says in an interview with NPR's Michele Norris. "But it wasn't until I was 14 when I picked it up myself when my father handed me these sheets of music of The Beatles and some other classics. That's where I learned all the chords and learned how to play and sing at the same time. All that music kind of lives with you, but I don't go back to it that often."

González is one of the standout artists in a recent wave of new Swedish musicians that's included Peter Björn and John, The Shout Out Louds, The Concretes and the electro-pop group The Knife. The Knife originally wrote "Heartbeats," the song that helped put González on the map.

Other songs González has reinvented include the Joy Division's "Love Will Tear Us Apart," "Born in the U.S.A." by Bruce Springsteen and Kylie Minogue's dance-pop song "Hand On Your Heart."

"I heard ['Hand On Your Heart'] a million times before," González says. "But I was watching TV and saw the video and started listening to the lyrics. And it felt like the production of the whole song and the video didn't match the words. So that was kind of a challenge."