Accessibility links
Sputnik Left Legacy for U.S. Science Education When the Soviets launched Sputnik into orbit on Oct. 4, 1957, their history-making accomplishment sparked a much-needed revolution in scientific education in the U.S. But today, many educators feel that revolution has lost valuable ground. 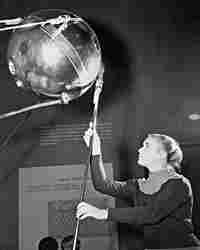 A Russian guide-engineer at a Moscow exhibition displays a replica of the Soviet satellite Sputnik 1, November 1957. Bettman/Corbis hide caption

When Sputnik's "beep" first reached Earth on Oct. 4, 1957, many Americans dreaded that the Russian satellite was spying on them.

The Soviets' history-making accomplishment — launching a satellite into orbit — created both paranoia and concern that the Soviets had beaten Americans into space. That concern sparked a much-needed revolution in scientific education in the U.S.

America's scientific community, which had long been pushing for a new direction in science education, seized on the national mood to rejuvenate the curriculum. The effort was spearheaded by notable scientists such as the late David Hawkins, an assistant to A-bomb designer J. Robert Oppenheimer. In a 1983 essay, Hawkins reflected on his work. He answered those who said that there was no time for the reforms, no time to "reinvent the wheel."

"I cannot resist a first reply, which is that not everything is known, as yet, about the wheel, either the mathematics of it or the physics," Hawkins wrote. "I am thinking ... of the world of modern physics, in which one may learn to think of rotations that go twice around before getting back to the starting point. Today's children will do well not to close their minds prematurely on the subject of wheels."

Myron Atkin, professor emeritus of education at Stanford University, says scientists like Hawkins pushed teaching toward basic research, and away from the practical orientation that they felt was holding science education back.

"How does a refrigerator work? How does a four-stroke gasoline engine work? The physicists looked at this, and they said, 'these are not interesting physics problems,'" Atkin said.

Washington gave the new science curriculum an infusion of more than a billion dollars when it passed the National Defense Education Act in 1958 — big money back then. Gerry Wheeler, former head of the National Science Teachers Association, says the new focus made science sexy.

"I signed up and was accepted at a special summer program," Wheeler recalls. "I was able to choose my field — I chose physics — and we covered a full year of high school physics in six weeks."

In classrooms, educational tools began to change. Lab kits and overhead projectors were added, and educational films became part of the curriculum.

The era also saw the beginning of a new federal involvement in education that would spread out in all directions in the coming years. The government beefed up its agencies with an alphabet soup of science organizations, many of which still survive.

But that burst of enthusiasm was overtaken by new demands. Educators became preoccupied with the effort to expand access to education during the civil rights era. More recently, the No Child Left Behind Act has focused on reading and basic math, not on science.

Many educators feel that that the U.S. is again losing its science lead to countries like Korea and Italy, where more advanced degrees are awarded. Stanford's Atkins says that science education needs a slow, steady approach rather than another short-lived boomlet.

At a hearing early this year, Sen. Edward Kennedy (D-MA) said that the way forward lies in the past.

"We did it after the Sputnik launch, when we trained a new generation of Americans in math and science. And we inspired millions more to greater and greater innovation when President Kennedy challenged us to send a man to the moon," Kennedy said.