Accessibility links
Ukraine Holds Critical Parliamentary Vote Ukrainians head to the polls Sunday to vote for a new parliament in elections they hope will break years of political crisis. The leaders of the country's Orange Revolution say they want to reunite after bitter infighting split them apart. But whether their side will win is still unclear.

Ukrainians head to the polls Sunday to vote for a new parliament in elections they hope will break years of political crisis. The leaders of the country's Orange Revolution say they want to reunite after bitter infighting split them apart. But whether their side will win is still unclear. 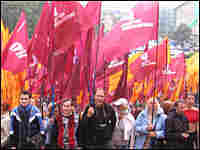 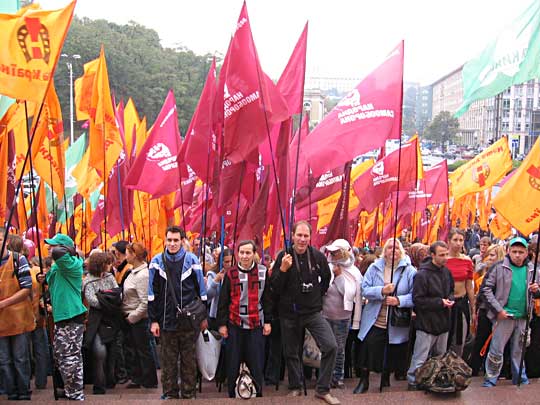 Voters in the former Soviet Republic of Ukraine are electing a new parliament today. The main choice is between the pro-Western leaders of the Orange Revolution and the pro-Russian leaders they replaced. The Orange Revolution camp is promising to reunite and put divisive infighting in the past, but that may not be enough to beat the pro-Moscow politicians who've come back since their defeat three years ago.

GREGORY FEIFER: Kiev has been down this road before. The city is awash in colored campaign flags and the coalition of liberal party leaders is pledging to start a comprehensive reform program.

FEIFER: Pro-Western President Victor Viktor Yushchenko's bloc held a rally Friday in the Central Square. The bloc's top candidate is Yuriy Lutsenko. He says the Orange Revolution leaders have moved beyond the personal rivalries that split their government in 2005.

Mr. YURIY LUTSENKO (People's Self Defense Leader): (Through translator) We have a comprehensive agreement to work together and we're expecting to restart the armed revolution. In the next few days, Ukraine will, once again, have a democratic government that will lead the country into Europe.

FEIFER: The Orange Revolution began in 2004 as a protest against the rigged presidential election. Thousands came on to the streets to demonstrate against Ukraine's pro-Moscow administration, and Orange Revolution coalition subsequently took power. But a year later, President Yushchenko fired his main ally, the popular Prime Minister Yuliya Tymoshenko and the coalition fell apart.

But this past week, Yushchenko publicly embraced Tymoshenko and he indicated he'd appoint her prime minister again. Tymoshenko told reporters this weekend that she learned from her time in government.

Ms. YULIYA TYMOSHENKO (Former Prime Minister, Ukraine): (Through translator) I believe my main mistake was working too effectively. I begin tackling issues that were against the interests of clans of powerful businessman. I was too optimistic then. This time, I know to be more careful.

FEIFER: But whether Tymoshenko becomes prime ministers depends on the outcome of today's elections. The group that's expected to win the most votes is the pro-Russian Party of Regions. The party is headed by Viktor Yanukovych.

Yanukovych was Ukraine's prime minister when the Orange Revolution drove him from power. But Yanukovych returned to the prime minister's office in 2006, and he and his old rival Yushchenko are battling again. Last April, President Yushchenko accused Prime Minister Yanukovych of trying to use served power and Yushchenko dispends at the parliament. Yanukovych and his Party of Region say that move showed the true colors of the Orange Revolution coalition. Boris Kolesnikov is the campaign chief for the Party of Regions.

Mr. BORIS KOLESNIKOV (Campaign Chief, Party of Regions): (Through translator) We don't consider the Orange Revolution leaders democratic. They're thieves who have spread corruption and mislead the West. What emerges from the election is still very much up in the air.

FEIFER: The election's outcome probably will depend on whether smaller parties get enough votes to win seats in parliament, and if they do, which side they join. Both sides are setting up tents and preparing to stage protest if they believe the vote is fraudulent. The Party of Regions has already warned that the Orange Revolution camp is preparing to stuff the ballot boxes. Still, political analyst Vladimir Fisenko(ph) says Ukraine's ongoing political instability doesn't seem to matter to people here.

Mr. VLADIMIR FISENKO (Political Analyst): (Through translator) It's called the Ukrainian paradox. Business is booming we've had big economic growth and people's quality of life is improving. Ukrainians have become used to living amid a permanent state of political crisis.

FEIFER: Maybe Ukrainians have become used to the political turmoil, but that doesn't mean they like it. Alegui Yuvshenko(ph) says he and his fellow citizens have had enough.

Mr. ALEGUI YUVSHENKO (Resident, Kiev): (Through translator) We're sick of all the tents and colored flags all the time. I want the elections to end the political crisis, but I'm not holding out much hope.

FEIFER: Others are more at peach(ph) about the seemingly unending chaos of Ukrainian politics. They say that competing voices and the uncertain outcome of today's election show the democratic ideals of the Orange Revolution are taking hold.