Accessibility links
Olympic Discus Champion Al Oerter Dies at 71 He won gold medals in four straight Olympics and became one of track and fields biggest stars in the 1950s and '60s. Oerter died at a hospital near his Fort Myers Beach, Fla., home. 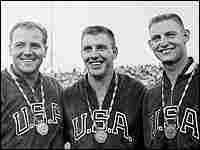 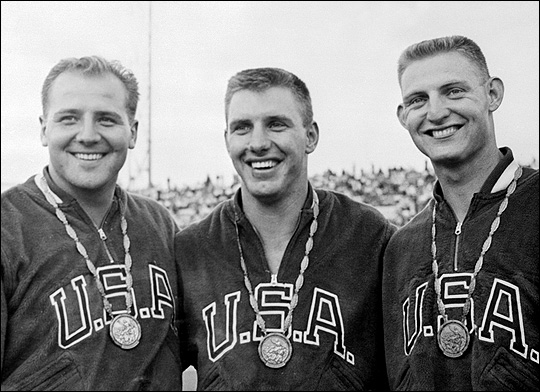 Al Oerter, center, is flanked by fellow Americans Rink Babka, left, and Richard Cochran. The trio swept the medals at the 1960 Olympics in Rome. 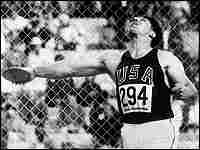 Al Oerter throws the discus at the 1968 Olympic Games in Mexico City, where he won his fourth straight Gold Medal in the event. AFP/Getty hide caption

Al Oerter throws the discus at the 1968 Olympic Games in Mexico City, where he won his fourth straight Gold Medal in the event. 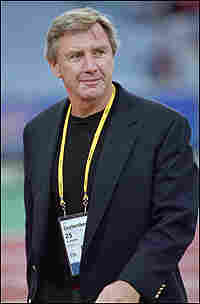 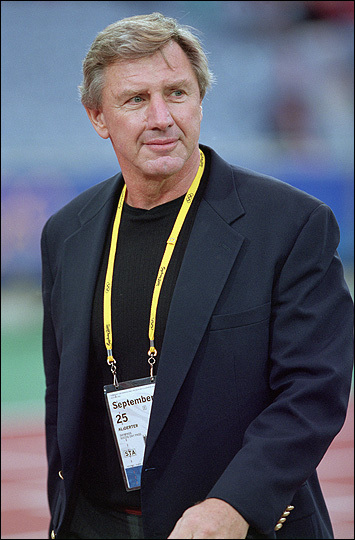 Al Oerter at the Sydney Olympics in 2000.

Discus great Al Oerter, who won gold medals in four straight Olympics and became one of track and fields biggest stars in the 1950s and '60s, died Monday. He was 71.

Oerter died at a hospital near his Fort Myers Beach, Fla., home, his wife Cathy Oerter said. He had dealt with high blood pressure since he was young and has struggled with heart problems, she said.

"He was a gentle giant," she said. "He was bigger than life."

Oerter won gold medals in 1956, 1960, 1964 and 1968. Oerter and Carl Lewis are the only track and field stars to capture the same event in four consecutive Olympics. Oerter, however, is the only one to set an Olympic record in each of his victories.

Born in New York City, Oerter grew up on Long Island, molding himself, without coaches or formal training, into a fierce competitor who performed his best when the stakes were highest.

"I can remember those games truly as if they were a week ago," Oerter told The Associated Press last year.

In Melbourne in 1956, Oerter threw 184 feet, 11 inches on his first toss. No one else, including teammate and world-record holder Fortune Gordien, came close to beating him.

He came from behind to win again in Rome, and overcame torn rib cartilage and other injuries to make it three in a row at the Tokyo Games in 1964.

At 32, he was a long shot in the 1968 field headed by world-record holder Jay Silvester. However, Oerter responded with a personal-best 212 feet, 11 inches to leave Mexico City with the gold.

He came out of retirement and won a spot as an alternate on the 1980 team that didn't compete because of the boycott ordered by President Carter.

Later in life, Oerter discovered a new passion and took up abstract painting.

Oerter maintained a tie to the Olympic movement through Art of the Olympians, a program he founded to give him and other former Olympians who've taken up art to showcase their work.

"Al approached the art world the same way he approached the sports world," said friend and former Olympian Liston Bochette. "He studied it. He analyzed it. And he sought excellence in the arts."