Accessibility links
Roles for Women in U.S. Army Expand Pentagon rules dictate that women may not be assigned to ground combat units. But the nature of the Iraq war has led to a blurring of distinction between front-line and rear areas, and more women are finding themselves in the thick of battle.

First in a five-part series. 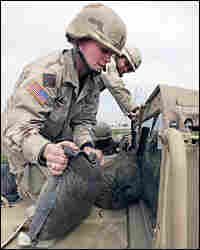 In this 2004 photo, U.S. Army Lt. Katrina Metcalfe places sandbags on a vehicle for protection in the event of an attack by gunfire at a palace of ousted Iraqi president Saddam Hussein in Tikrit, Iraq. Stan Honda/AFP/Getty Image hide caption

Part 2: Three Female Soldiers on Their Experiences in Iraq

Part 5: A Female Soldier on Life After Amputation

Pentagon rules dictate that women may not be assigned to ground combat units. That means they are not allowed to serve in the infantry or as special operations commandos.

This week, All Things Considered examines the expanding role of women in the military operations in Iraq and Afghanistan.

Military sociologist Brenda Moore, of the University at Buffalo-The State University of New York, has been talking to women recently returned from Iraq, and says that "history is happening as we speak."

The current conflict in Iraq is a war against guerrilla insurgency — fought with the use of improvised explosive devices, mortar attacks, suicide bombs and rocket-propelled grenades, Moore says.

So even though women are prohibited from serving in direct combat, "the unpredictable nature of the attacks in this war blurs the distinction between front-line and rear areas," Moore says.

"Women who are assigned to support units are finding themselves in the thick of the battle."

Moore notes that a number of legislative changes led to the expanded role for women in today's military.

The first major factor was a shift in the mid-1970s from the military draft to an all-volunteer force. This change created opportunities for women to serve in greater numbers as the services sought to meet personnel goals.

"There simply were not enough men volunteering to serve, making the service of women a necessity," Moore says.

In the early 1990s, Congress lifted the ban on women flying combat aircraft and serving on combat ships, and during the first Clinton administration, then-Secretary of Defense Les Aspin announced new rules and policies that opened more military jobs to women.

And compared with other countries, women in the U.S. military are playing a more active role in direct combat activities as a result of the Iraq war.

In the Netherlands, for instance, a 1979 law led to the integration of the Dutch military, with no formal restrictions on women serving combat duty. In practice, however, Dutch women are assigned to traditional roles, such as clerical, communication and nursing work.

"While legislatively, these roles are open, in actuality, women have not been serving in direct combat," Moore says.

In Israel, too, although the law states that all 18-year-old Jewish women must serve for two years and may volunteer for combat assignments, the reality is quite different. The Israel military doesn't take all eligible women, but rather selects the number it needs to meet personnel quotas each year, and once a combat unit deploys, women soldiers are generally evacuated.

As a result, the U.S. military is in the vanguard of women serving in the military.

"This is a time in world history that women are actually serving in unprecedented roles — not because they have the military occupational specialty, but because they're there," Moore says.