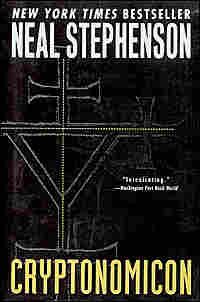 Let's set the existence-of-God issue aside for a later volume, and just stipulate that in some way, self replicating organisms came into existence on this planet and immediately began trying to get rid of each other, either by spamming their environments with rough copies of themselves, or by more direct means which hardly need to be belabored.

Most of them failed, and their genetic legacy was erased from the universe forever, but a few found some way to survive and to propagate. After about three billion years of this sometimes zany, frequently tedious fugue of carnality and carnage, Godfrey Waterhouse IV was born, in Murdo, South Dakota, to Blanche, the wife of a Congregational preacher named Bunyan Waterhouse. Like every other creature on the face of the earth, Godfrey was, by birthright, a stupendous badass, albeit in the somewhat narrow technical sense that he could trace his ancestry back up a long line of slightly less highly evolved stupendous badasses to that first self-replicating gizmo-which, given the number and variety of its descendants, might justifiably be described as the most stupendous badass of all time.

Everyone and everything that wasn't a stupendous badass was dead.

As nightmarishly lethal, memetically programmed deathmachines went, these were the nicest you could ever hope to meet. In the tradition of his namesake (the Puritan writer John Bunyan, who spent much of his life in jail, or trying to avoid it) the Rev. Waterhouse did not preach in any one place for long. The church moved him from one small town in the Dakotas to another every year or two. It is possible that Godfrey found the lifestyle more than a little alienating, for, sometime during the course of his studies at Fargo Congregational College, he bolted from the fold and, to the enduring agony of his parents, fell into worldly pursuits, and ended up, somehow, getting a Ph.D. in Classics from a small private university in Ohio. Academics being no less nomadic than Congregational preachers, he took work where he could find it. He became a Professor of Greek and Latin at Bolger Christian College (enrollment 322) in West Point, Virginia, where the Mattaponi and Pamunkey Rivers came together to form the estuarial James, and the loathsome fumes of the big paper mill permeated every drawer, every closet, even the interior pages of books. Godfrey's young bride, nee Alice Pritchard, who had grown up following her itinerant-preacher father across the vastnesses of eastern Montana-where air smelt of snow and sage-threw up for three months. Six months later she gave birth to Lawrence Pritchard Waterhouse.

The boy had a peculiar relationship with sound. When a fire engine passed, he was not troubled by the siren's howl or the bell's clang. But when a hornet got into the house and swung across the ceiling in a broad Lissajous, droning almost inaudibly, he cried in pain at the noise. And if he saw or smelled something that scared him, he would clap his hands over his ears.

One noise that troubled him not at all was the pipe organ in the chapel at Bolger Christian College. The chapel itself was nothing worth mentioning, but the organ had been endowed by the paper mill family and would have sufficed for a church four times the size. It nicely complemented the organist, a retired high school math teacher who felt that certain attributes of the Lord (violence and capriciousness in the Old Testament, majesty and triumph in the New) could be directly conveyed into the souls of the enpewed sinners through a kind of frontal sonic impregnation. That he ran the risk of blowing out the stained-glass windows was of no consequence since no one liked them anyway, and the paper mill fumes were gnawing at the interstitial lead. But after one little old lady too many staggered down the aisle after a service, reeling from tinnitus, and made a barbed comment to the minister about the exceedingly dramatic music, the organist was replaced.

Nevertheless, he continued to give lessons on the instrument.

Students were not allowed to touch the organ until they were proficient at the piano, and when this was explained to Lawrence Pritchard Waterhouse, he taught himself, in three weeks, how to play a Bach fugue, and signed up for organ lessons. Since he was only five years old at the time, he was unable to reach both the manuals and the pedals, and had to play standing-or rather strolling, from pedal to pedal.

When Lawrence was twelve, the organ broke down. That paper mill family had not left any endowment for maintenance, so the math teacher decided to have a crack at it. He was in poor health and required a nimble assistant: Lawrence, who helped him open up the hood of the thing.

For the first time in all those years, the boy saw what had been happening when he had been pressing those keys.

For each stop-each timbre, or type of sound, that the organ could make (viz. blockflöte, trumpet, piccolo)-there was a separate row of pipes, arranged in a line from long to short. Long pipes made low notes, short high. The tops of the pipes defined a graph: not a straight line but an upwardtending curve. The organist/math teacher sat down with a few loose pipes, a pencil, and paper, and helped Lawrence figure out why. When Lawrence understood, it was as if the math teacher had suddenly played the good part of Bach's Fantasia and Fugue in G Minor on a pipe organ the size of the Spiral Nebula in Andromeda-the part where Uncle Johann dissects the architecture of the Universe in one merciless descending ever-mutating chord, as if his foot is thrusting through skidding layers of garbage until it finally strikes bedrock. In particular, the final steps of the organist's explanation were like a falcon's dive through layer after layer of pretense and illusion, thrilling or sickening or confusing depending on what you were. The heavens were riven open. Lawrence glimpsed choirs of angels ranking off into geometrical infinity.

Cryptonomicon copyright (c) 1999 by Neal Stephenson. Reprinted with permission by Avon, an imprint of HarperCollins Publishers. All Rights Reserved