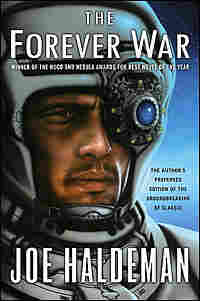 Unef's first starships had been possessed of a kind of spidery, delicate beauty. But with various technological improvements, structural strength became more important than conserving mass (one of the old ships would have folded up like an accordion if you'd tried a twenty-five-gee maneuver), and that was reflected in the design: stolid, heavy, functional-looking. The only decoration was the name MASARYK II, stenciled in dull blue letters across the obsidian hull.

Our shuttle drifted over the name on its way to the loading bay, and there was a crew of tiny men and women doing maintenance on the hull. With them as a reference, we could see that the letters were a good hundred meters tall. The ship was over a kilometer long (1036.5 meters, my latent memory said), and about a third that wide (319.4 meters).

That didn't mean there was going to be plenty of elbow-room. In its belly, the ship held six large tachyondrive fighters and fifty robot drones. The infantry was tucked off in a corner. War is the province of friction, Chuck von Clausewitz said; I had a feeling we were going to put him to the test.

We had about six hours before going into the acceleration tank. I dropped my kit in the tiny billet that would be my home for the next twenty months and went off to explore.

Charlie had beaten me to the lounge and to the privilege of being first to evaluate the quality of Masaryk II's coffee.

"At least it isn't soya," I said, taking a first cautious sip. Decided I might be longing for soya in a week.

The officers' lounge was a cubicle about three meters by four, metal floor and walls, with a coffee machine and a library readout.

Six hard chairs and a table with a typer on it.

"Jolly place, isn't it?" He idly punched up a general index on the library machine. "Lots of military theory." "That's good. Refresh our memories." "Sign up for officer training?" "Me? No. Orders." "At least you have an excuse." He slapped the on-off button and watched the green spot dwindle. "I signed up. They didn't tell me it'd feel like this." "Yeah." He wasn't talking about any subtle problem: burden of responsibility or anything. "They say it wears off, a little at a time." All of that information they force into you; a constant silent whispering.

"Ah, there you are." Hilleboe came through the door and exchanged greetings with us. She gave the room a quick survey, and it was obvious that the Spartan arrangements met with her approval. "Will you be wanting to address the company before we go into the acceleration tanks?" "No, I don't see why that would be . . . necessary." I almost said "desirable." The art of chastising subordinates is a delicate art. I could see that I'd have to keep reminding Hilleboe that she wasn't in charge.

Or I could just switch insignia with her. Let her experience the joys of command.

"You could, please, round up all platoon leaders and go over the immersion sequence with them. Eventually we'll be doing speed drills. But for now, I think the troops could use a few hours' rest." If they were as hungover as their commander.

"Yes, sir." She turned and left. A little miffed, because what I'd asked her to do should properly have been a job for Riland or Rusk.

Charlie eased his pudgy self into one of the hard chairs and sighed. "Twenty months on this greasy machine. With her. Shit." "Well, if you're nice to me, I won't billet the two of you together." "All right. I'm your slave forever. Starting, oh, next Friday." He peered into his cup and decided against drinking the dregs. "Seriously, she's going to be a problem. What are you going to do with her?" "I don't know." Charlie was being insubordinate, too, of course.

But he was my XO and out of the chain of command. Besides, I had to have one friend. "Maybe she'll mellow, once we're under weigh." "Sure." Technically, we were already under weigh, crawling toward the Stargate collapsar at one gee. But that was only for the convenience of the crew; it's hard to batten down the hatches in free fall. The trip wouldn't really start until we were in the tanks.

The lounge was too depressing, so Charlie and I used the remaining hours of mobility to explore the ship.

The bridge looked like any other computer facility; they had dispensed with the luxury of viewscreens. We stood at a respectful distance while Antopol and her officers went through a last series of checks before climbing into the tanks and leaving our destiny to the machines.

Actually, there was a porthole, a thick plastic bubble, in the navigation room forward. Lieutenant Williams wasn't busy, the preinsertion part of his job being fully automated, so he was glad to show us around.

He tapped the porthole with a fingernail. "Hope we don't have to use this, this, trip."

The Forever War copyright (c) 1974, 1975, 1997 by Joe W. Haldeman. Available from Eos, an Imprint of HarperCollins Publishers. All rights Reserved. 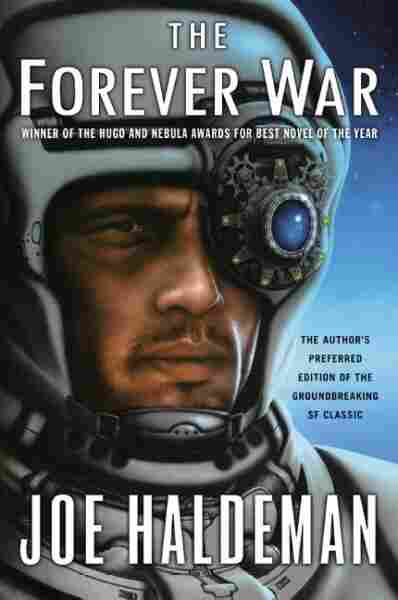