Excerpt: 'The Last Light of the Sun'

Excerpt: 'The Last Light of the Sun' The Last Light of the Sun

A horse, he came to understand, was missing.

Until it was found nothing could proceed. The island marketplace was crowded on this grey morning in spring. Large, armed, bearded men were very much present, but they were not here for trade. Not today. The market would not open, no matter how appealing the goods on a ship from the south might be.

He had arrived, clearly, at the wrong time.

Firaz ibn Bakir, merchant of Fezana, deliberately embodying in his brightly coloured silks (not nearly warm enough in the cutting wind) the glorious Khalifate of Al-Rassan, could not help but see this delay as yet another trial imposed upon him for transgressions in a less than virtuous life.

It was hard for a merchant to live virtuously. Partners demanded profit, and profit was difficult to come by if one piously ignored the needs-and opportunities-of the world of the flesh. The asceticism of a desert zealot was not, ibn Bakir had long since decided, for him.

At the same time, it would be entirely unfair to suggest that he lived a life of idleness and comfort. He had just endured (with such composure as Ashar and the holy stars had granted him) three storms on the very long sea journey north and then east, afflicted, as always at sea, by a stomach that heaved like the waves, and with the roundship handled precariously by a continuously drunken captain. Drinking was a profanation of the laws of Ashar, of course, but in this matter ibn Bakir was not, lamentably, in a position to take a vigorous moral stand.

Vigour had been quite absent from him on the journey, in any case.

It was said among the Asharites, both in the eastern homelands of Ammuz and Soriyya, and in Al-Rassan, that the world of men could be divided into three groups: those living, those dead, and those at sea.

Ibn Bakir had been awake before dawn this morning, praying to the last stars of the night in thanks for his finally being numbered once more among those in the blessed first group.

Here in the remote, pagan north, at this wind-scoured island market of Rabady, he was anxious to begin trading his leather and cloth and spices and bladed weapons for furs and amber and salt and heavy barrels of dried cod (to sell in Ferrieres on the way home)-and to take immediate leave of these barbarian Erlings, who stank of fish and beer and bear grease, who could kill a man in a bargaining over prices, and who burned their leaders-savages that they were-on ships among their belongings when they died.

This last, it was explained to him, was what the horse was all about. Why the funeral rites of Halldr Thinshank, who had governed Rabady until three nights ago, were currently suspended, to the visible consternation of an assembled multitude of warriors and traders.

The offence to their gods of oak and thunder, and to the lingering shade of Halldr (not a benign man in life, and unlikely to be so as a spirit), was considerable, ibn Bakir was told. Ill omens of the gravest import were to be assumed. No one wanted an angry, unhoused ghost lingering in a trading town. The fur-clad, weapon-bearing men in the windy square were worried, angry, and drunk, pretty much to a man.

The fellow doing the explaining, a bald-headed, ridiculously big Erling named Ofnir, was known to ibn Bakir from two previous journeys. He had been useful before, for a fee: the Erlings were ignorant, tree-worshipping pagans, but they had firm ideas about what their services were worth.

Ofnir had spent some years in the east among the Emperor's Karchite Guard in Sarantium. He had returned home with a little money, a curved sword in a jewelled scabbard, two prominent scars (one on top of his head), and an affliction contracted in a brothel near the Sarantine waterfront. Also, a decent grasp of that difficult eastern tongue. In addition-usefully-he'd mastered sufficient words in ibn Bakir's own Asharite to function as an interpreter for the handful of southern merchants foolhardy enough to sail along rocky coastlines fighting a lee shore, and then east into the frigid, choppy waters of these northern seas to trade with the barbarians.

The Erlings were raiders and pirates, ravaging in their longships all through these lands and waters and-increasingly-down south. But even pirates could be seduced by the lure of trade, and Firaz ibn Bakir (and his partners) had reaped profit from that truth. Enough so to have him back now for a third time, standing in a knife-like wind on a bitter morning, waiting for them to get on with burning Halldr Thinshank on a boat with his weapons and armour and his best household goods and wooden images of the gods and one of his slave girls . . . and a horse.

A pale grey horse, a beauty, Halldr's favourite, and missing. On a very small island.

Ibn Bakir looked around. A sweeping gaze from the town square could almost encompass Rabady. The harbour, a stony beach, with a score of Erling ships and his own large roundship from the south-the first one in, which ought to have been splendid news. This town, sheltering several hundred souls perhaps, was deemed an important market in the northlands, a fact that brought private amusement to the merchant from Fezana, a man who had been received by the khalif in Cartada, who had walked in the gardens and heard the music of the fountains there.

No fountains here. Beyond the stockade walls and the ditch surrounding them, a quilting of stony farmland could be seen, then livestock grazing, then forest. Beyond the pine woods, he knew, the sea swept round again, with the rocky mainland of Vinmark across the strait. More farms there, fisher-villages along the coast, then emptiness: mountains and trees for a very long way, to the places where the reindeer ran (they said) in herds that could not be numbered, and the men who lived among them wore antlers themselves to hunt, and practised magics with blood in the winter nights.

Ibn Bakir had written these stories down during his last long journey home, had told them to the khalif at an audience in Cartada, presented his writings along with gifts of fur and amber. He'd been given gifts in return: a necklace, an ornamental dagger. His name was known in Cartada now.

It occurred to him that it might be useful to observe and chronicle this funeral-if the accursed rites ever began.

He shivered. It was cold in the blustering wind. An untidy clump of men made their way towards him, tacking across the square as if they were on a ship together. One man stumbled and bumped another; the second one swore, pushed back, put a hand to his axe. A third intervened, and took a punch to the shoulder for his pains. He ignored it like an insect bite. Another big man. They were all, ibn Bakir thought sorrowfully, big men.

It came to him, belatedly, that this was not really a good time to be a stranger on Rabady Isle, with the governor (they used an Erling word, but it meant, as best ibn Bakir could tell, something very like a governor) dead and his funeral rites marred by a mysteriously missing animal. Suspicions might fall.

As the group approached, he spread his hands, palms up, and brought them together in front of him. He bowed formally. Someone laughed. Someone stopped directly in front of him, reached out, unsteadily, and fingered the pale yellow silk of ibn Bakir's tunic, leaving a smear of grease. Ofnir, his interpreter, said something in their language and the others laughed again. Ibn Bakir, alert now, believed he detected an easing of tension. He had no idea what he'd do if he was wrong.

The considerable profit you could make from trading with barbarians bore a direct relation to the dangers of the journey-and the risks were not only at sea. He was the youngest partner, investing less than the others, earning his share by being the one who travelled . . . by allowing thick, rancid-smelling barbarian fingers to tug at his clothing while he smiled and bowed and silently counted the hours and days till the roundship might leave, its hold emptied and refilled.

"They say," Ofnir spoke slowly, in the loud voice one used with the simple-minded, "it is now known who take Halldr horse." His breath, very close to ibn Bakir, smelled of herring and beer.

His tidings, however, were entirely sweet. It meant they didn't think the trader from Al-Rassan, the stranger, had anything to do with it. Ibn Bakir had been dubious about his ability, with two dozen words in their tongue and Ofnir's tenuous skills, to make the obvious point that he'd just arrived the afternoon before and had no earthly (or other) reason to impede local rites by stealing a horse. These were not men currently in a condition to assess cogency of argument.

"Who did it?" Ibn Bakir was only mildly curious.

"Servant to Halldr. Sold to him. Father make wrong killing. Sent away. Son have no right family now."

Lack of family appeared to be an explanation for theft here, ibn Bakir thought wryly. That seemed to be what Ofnir was conveying. He knew someone back home who would find this diverting over a glass of good wine.

"So he took the horse? Where? Into the woods?" Ibn Bakir gestured at the pines beyond the fields.

Ofnir shrugged. He pointed out into the square. Ibn Bakir saw that men were now mounting horses there-not always smoothly-and riding towards the open town gate and the plank bridge across the ditch. Others ran or walked beside them. He heard shouts. Anger, yes, but also something else: zest, liveliness. The promise of sport.

"He will soon found," Ofnir said, in what passed here in the northlands for Asharite.

Ibn Bakir nodded. He watched two men gallop past. One screamed suddenly as he passed and swung his axe in vicious, whistling circles over his head, for no evident reason.

"What will they do to him?" he asked, not caring very much.

Ofnir snorted. Spoke quickly in Erling to the others, evidently repeating the question.

There was a burst of laughter. One of them, in an effusion of good humour, punched ibn Bakir on the shoulder.

The merchant, regaining his balance, rubbing at his numbed arm, realized that he'd asked a naive question.

"Blood-eagle death, maybe," said Ofnir, flashing yellow teeth in a wide grin, making a complex two-handed gesture the southern merchant was abruptly pleased not to understand. "You see? Ever you see?"

Excerpted from The Last Light of the Sun by Guy Gavriel Kay. Reproduced with permission of Roc Publishing, a division of Penguin Group. 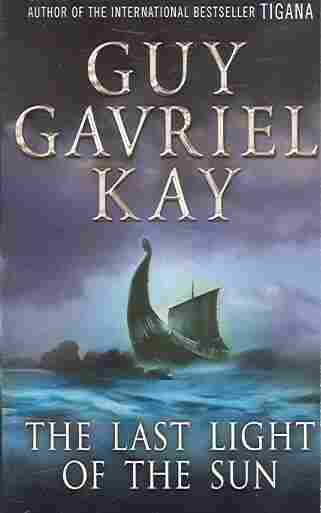 The Last Light of the Sun